Our club hasn’t become the most beloved, sought after cricket club in the world for nothing. The Mighty Greysmen are a collection of extra-ordinary individuals. This is our story, starting with officers of the club. 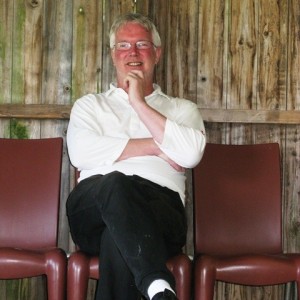 Terry (aka Tel, aka the Shadow, aka Skippy), has the official title of “ceremonial guru to the moral compost of the team”. A wily left handed batsman who has amassed 5000+ stylish (mostly leg side) runs and 200+ wickets throughout his career in 350+ games. A cunning right arm bowler, infamous for deception and that incongruous skip in his run-up.

For a stunning visual collection of images of the Shadow, click here. 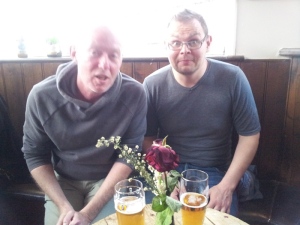 Ben (aka QB, aka Quiet Ben, aka Not Dead Ben, aka Benny) bowls right arm hooping in-swing and bats very very steadily towards the middle-low order. One of those quiet and unassuming characters, QB is a fountain of knowledge and builds the world’s best sound systems from disused ikea furniture and vibrators.  PS he’s on the right in this picture.

Jerry (aka Jez, aka Jez the Lez) is often mistaken for a lady who likes ladies. A solid right hand opening batsman, Jez is second on the Mighty Greys all time top run scorer list (at the time of publication he has 7000+ runs). Very rarely he does bowl some right arm loopiness, but his record is rather impressive when he does. When he doesn’t though, he mostly keeps wickets -very well.

Rob (aka Robbie, aka Rocky) is the tough man of the team. He beats up the riff raff and is never injured. Whether it’s late on a sunday night, or bowling the first over of the match up the hill, our metronomic opening bowler has great shape. He warms up for about an hour on the boundary prior to bowling his first over – to preserve is pristine, manly shape.

Alex (aka Al, aka Big Al) is the cornerstone of everything Mighty Greys. He arranges the most publiest fixtures which are so beautifully apt, so well placed geographically and so well matched for cricketing ability that, well, in our eyes he is infallible. He can get away with anything he wants: in the pub, at the crease, behind the stumps. With that fixtures list, it just doesn’t matter. But for the record, Big Al is a blazing right handed top-middle order batsman, with great hands. He occasionally bowls right arm proper loopies, that really do get wickets. He keeps wicket too, as and when needed, without moaning or groaning like most of us would.

Derek (aka Del, aka Delboy, aka Des, aka the Scum, aka the Aussie Scum) tells bad jokes, giggles a lot and is the team whipping boy. A left hand top order batsman, his dogged batting style has been known to frustrate the odd opening bowler, and his bad jokes and constant cries of “stay low” tend to frustrate the fielders and batsmen -both home and away. He occasionally bowls some military medium or big turners at the end of the innings and manages to keep his place in the team by keeping the website up to date and scoring steadily at the crease.

The remaining extraordinary greysmen will be presented in alphabetical order (and more will be added in time).

Ibrahim (aka Ibu) is the team gentleman. With his beaming smile (clearly shown here), he’s a demon right arm off spinner, holding the Mighty Greys record for most wickets in a season (37), and this was his first season for the club! He tends to bat down, way down the order, with a flicky, wristy technique that will one day surely blast some kind of attack out of the park. 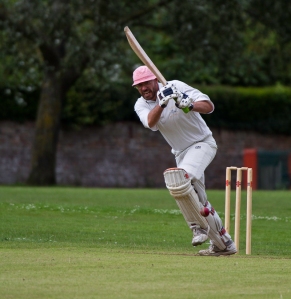 David (aka Dave, aka Double Dee, aka Vice, aka the Overlord) is an absolute weapon. A right handed batsman capable of tearing apart any attack at any moment from the top order or coming in lower down he has an awesome technique, is absolutely massive and hits the ball like a train (as shown here). He opens the bowling, with his left arm round the wicket deliveries swinging and seaming all over the place who knows what’s going on when he bowls. His hands are like buckets, he drinks like a fish.

Rick (aka Hatrick) is a recent addition to the club after an impressive winter net series. As a tall man, Rick first impressed with a slick right arm medium-fast action, bouncing akwardly for all rusty Greysman bar none. His highly correct right-handed batting technique has also impresssed TMG scouts though, with some stylish, solid innings already under his belt. 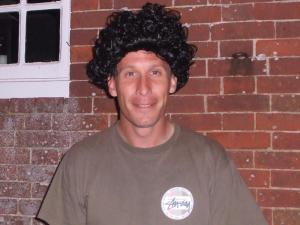 Tim (aka chubs, aka fatty, aka big man, aka hugh-g, aka e-norm, aka chops, aka blubs, aka flabs) is the ultimate family man. His commitment to the greys over the years was unprecedented and now understood to be untenable, but it clearly averages out to still be outstanding for many years to come. Despite his obvious weight problems, he moves deceptively quickly around the field, with razor sharp reflexes if the ball is above waist height and within wrist’s reach travelling at less than 5 miles per hour. His right arm seamers hold the record for the most 5 wicket hauls in Greys history and his blazing right handed long-limbed batting has lambasted most of the bowlers throughout the pub and village cricket scene in Sussex. 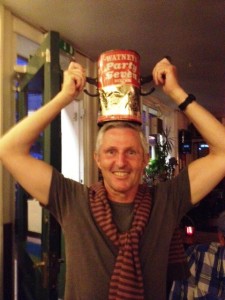 David (aka the Kid, aka the matchmaker) is a recent find for the Mighty Greys. His international exploration and general niceness make him an enigma for the club, especially seeing as it was EO who introduced him to us in the first place. His dogged right hand batting style, and super sharp slip, gully and cover fielding make him an asset for any greys lineup – if he’s in the country. He also has a reputation for match making, both for mighty greysmen finding love, and for mighty greysmen finding new players. What a find!

Biff (aka Biffo). A tenacious right handed opening batsman, Biff has steadily accumulated a massive 7000 runs for the club, almost all of them from the top of the order. Also a floaty, swingy, awkward late overs bowler, he has been known to poach many tail-end wickets from the mainstream bowlers over the years.

Guy (aka Guybo, aka Wristy, aka Watchout) hits the ball harder than any of us have ever seen. As a right handed top order batsman, the wrist action of this man is extra-ordinary. As a rule of thumb, we recommend not bowling full, or standing short on the leg side. He also bowls demon, inswinging left arm toe crushing stump whackers from 15 yards.

David (aka Chiefy, aka Chief Turningbull, aka Dave, aka Papa) is a right armed off-spinner who turns the ball a rather long way. If he played each week undoubtedly he’d challenge the very best of our bowlers for the leading wicket taker’s award. He bats right handed and has one hell of an eye. Don’t bowl short to this man cos he’ll whack ya, but his footwork is questionable at best.

Richard (aka Richie P, aka Mr Inflatable, aka The Penguin, aka Kim Jong) is a right arm medium deceptacon. He bowls with great guile and skill, and begins his runup with a trademark penguin like inflation. With a rather over sided cranial structure, Richie also resembles a certain North Korean father and son pairing when he dons his summer sunnies.

Ian (aka EO, aka IO, aka hot fingers, aka Dr Ian Van Ubernause, aka Otto von Abysmal) received his PhD from the University of TMGs for his longitudinal study into “the effects of nausiation of fellow greysmen”. EO -the hoster of great parties, the winner of epic matches, the finder of great pubs and the worst taxi driver in Brighton, deservedly won the coveted award for the Mighty Greysman of the Year back in 2011 for his remarkable final over antics against Hammerwood. Renowned in Brighton for his inability to give a straight answer, Ian tends to bowl first change, with his right armed loopy outswing bowling released from great heights that beguiles and bamboozles even the most lightfooted top order batsman – unless he drops short then he is anybody’s. His pace is awkward, his swing late. He bats down the order and in the last few years has learned to punch effectively with a straight bat, making him a dynamic and uber-useful lower order batsman. And on two occasions, entrenching his role as treasurer, Ian kindly left the club funds in the pub to be looked after behind the bar for over 3 months until he remembered they were there. He’s not a trusting, clear minded or unambiguous soul, but we do love him. 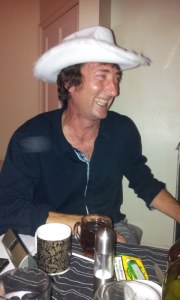 Rikky (aka Hehe, aka Shoe Pisser) will giggle before he starts any sentence. He’s a tall, swaggering first change (on occasion opening) bowler, who if he gets his length right will trouble even the best of kiwi imports from Pullborough. Not known for standing still at the crease, or in the bedroom, Ricky will charm the pants off the opposition, and their wives, and their mums.

Ian (aka Wig, aka Wiggy, aka Hopalong, aka the Bolton Cowboy) is a recent find for the club in 2014. After a steady set of winter nets, Wiggy (a right handed batsman) has shown some staunch resistance at the top of the order with his old school technique to steadily acumulate runs with a solid, stylish, very straight bat. He’s also the first man ever to take TMGs over the magical 300 mark in an innings.

3 responses to “The Mighty Greysmen”