Having made 166 and lost for the first time since August 2012′, the Mighty Greys found themselves once again batting first when they met Brunswick Village at St James’s in Ditchling.  Still smarting from the defeat, and the realisation that they had played like a bunch of stuffed toy animals, TMG made three changes, bringing in Ibu Dave the Kid and Chief Turning Bull McHugh for Delboy, Rikki and QB.
A better foundation was built this time, with Biff and Jerry slowly building a partnership before Biff was caught behind, soon followed by Jerry, uncharacteristically cutting to backward point. He would later make up for this by calling a no ball for three men behind square on the leg side. A brief appearance from Alex saw him playing across the line, so most of the overs saw Terry and Little Roo Alan patiently accumulate 50 or so, with Keith throwing up deliveries that came down with snow on them, deceiving Terry by bowling an unplayable wide two strips away from the off stump.
A late cameo from Dave Day saw him once again add those crucial twenty runs that are the difference between a winning and losing score and TMG went to tea 3 short of the 166 that had lost to the previous week.
Tea was an Alex spectacular featuring his trademark potato salad and copious cream scones, while we watched his protégées clump each other to all parts of the square on the main pitch.
Biff’s main concern  in setting a field was to ensure that Ibu, back at the scene of his crime, was placed as far as possible from Dave Hadrill’s collar bone. Brunswick made a worryingly fast start to their innings, with the Seth Efrican Lean making the most of an unusually off target Overlord, and the Village soon moved to 61 from the first ten overs, well ahead of the run rate, until Lean made the mistake of thinking that the Mighty Shadow never moved at mid on because he really was cemented into the ground. Falling low and to his right, Terry was oblivious to the shouts of “no fucking chance” from his team mates as he held on to Lean’s attempt to smash Robbie back towards the sightscreen. Seconds later the other ten Mighty Greys landed on his head and argued furiously about who had least belief that he was going to catch it.
Eight overs quality swing bowling from EO for just 10 runs saw the run rate fall along with regular Brunswick Village wickets until Biff put his heart, lungs and liver into stopping a late flurry from Barnes  and Shrives, until Dave was brought back to finish off the tail, with Alex catching Barnes at mid-on and the Village were all out for 133.

The Mighty Greys had returned to winning ways and back at the boozer there was only one subject of conversation. Alice! Then we put in our orders for the tooer to Devon. 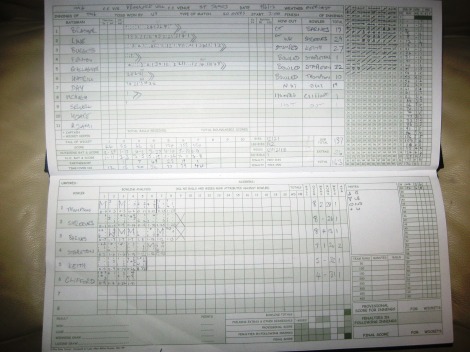