When you go to Denton it comes as little surprise that the tea comprises, no salad, and quite a lot of savouries encased in pastry.

Having won the toss Denton elected to bat, sending out the weightiest opening pairing seen in Sussex since the Tongan national team were last in town.

Opening with the ball for TMG’s were the suitably trim partnership of “the Wall” and “the Iron Chancellor” (Gallagher and Hoare). Both set about their task with aplomb bowling mostly good line and length keeping the Denton batters quiet. Hoare struck first bowling the Denton #2 (Jeff) off his pads. He was later heard to remark that Hoare had been lucky. Lucky perhaps for noticing Mr Jeff had really struggled to play anything off his toes which is where the tricksie Hoare had been aiming. Heh heh heh.

The crease was now occupied by Lee Poulton a batsman well known to TMG’s bowling attack, and the remaining opener D. Eagle who appeared to be warming to his task hitting the hapless old fella for a massive 6 and losing the ball in the process. Captain QB nursing his groin (deserved a PSM nom) started off bowling something that looked like spin? I think, and got suitably spanked until he reverted to seam–up off a couple of paces.

Burgess and Newland remained wicketless and Eagle scored a well earned 50, in a period of play that took the Denton score past 130. Things get a bit sketchy in the Denton scorebook at this point probably because their scorer Liam Poulton (son of Lee) joined his dad at the creased after Hat-Rick clean bowled Eagle for 58 (PSM nom). Liam announced himself by smashing Flynn back over his head for 4.

Father and son batted very well in unison with a plethora of lovely scoring shots the pick being Jnr launching Zonk for a humongous straight six that cleared the boundary fence, the trees, and the road to hit a vehicle parked on the other side of the road. Whose car was assaulted I hear you murmur in mild disinterest…

Mine. Yes the Bongo was banged and dented at Denton (psm nom). 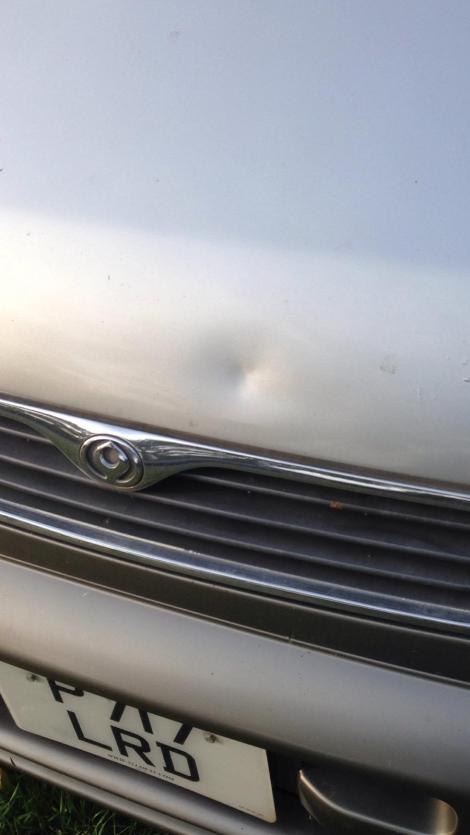 Father Poulton was finally removed by some smart fielding and glove work by Alex behind the stumps (psm nom) run out for 34.

Not sure of the score. The next batter was a fairly small boy, Warburton, who struggled to make an impression whilst Liam at the other end smashed some more impressive shots.

Denton finished on 185 for 4 off their 40 overs. Liam unbeaten on 45. It seemed a reasonable total on an unpredictable wicket.

Other notable moments from TGM’s in the field earning PSM noms: Zack hurling himself manfully about the field and appearing to develop an unnatural affection for the fencing as he lunged groin-first towards it; Biff throwing himself to the ground to field and in the act of rolling over releasing the ball in the general direction of the square; and probably the best bit of individual fielding (no votes) Hat-Rick’s diving stop at mid-wicket to a ball that was hammered hard and had four written all over it.

Tea was substantial as one would expect.

Suitably carbed up the TMG’s went out to bat; openers Line and Flynn.

The Denton opening bowlers failed to make any impact on the pair. It took Mr Eagle to come on to bowl to make a breakthrough bowling Biff with one that jagged back and clipped the top of off. Biff scored 16 including a fine cut for 4 (PSM nom).

This brought RoborBob to the crease and he started slowly playing himself in (it really works kids). Flynn at the other end was scoring freely and looked in great nick powering to an impressive half century playing a succession of lovely shots including some text book sweeps one of which earned him a psm nom. He finally holed out to mid–off, out for 60.

Mr Meek had been plundering runs at the other end and reeling in Flynn in the run chase. The Denton bowling was not the most challenging TMG will face this season but you still have to hit it, and Robor did that… REALLY HARD. He smashed 2 sixes one of which stuck in the fence (psm nom).

The departure of Hat–Rick brought Zack out to play, he likes to hit it hard as well. It goes like this rock back, and smash it. Or as Robbie H christened it “Zack, back and crack” (psm winner).

Denton found themselves unable to get any more wickets despite trying 8 different bowlers and Meek & Maxwell finished unbeated on 81 and 14 respectively. TMG’s getting the runs in the 30th over.

If you were wondering about RoborBob’s other 6 it was the final shot to win the match, class! (psm nom).

Other shots of praise earning noms: RoborBob block drive to a yorker for 4 (in my opinion should have won); Zack’s back foot drive “the Zack, back and crack”; RoborBob’s walloped one bounce four that nearly broke young Poulton’s finger.