The room is till dark.  It reeks of stale tobacco and alcohol.  All is quiet and still.

Without opening his eyes he reaches out and pushes the switch on the bedside radio.

Reaching out quickly he switches off the bedside radio.

He tries to move his tongue in his mouth. Everything feels stuck to everything else.

“That’s it.  I’m stopping smoking. My mouth feels like the inside of a Turkish wrestler’s jockstrap. Anyone who catches me smoking today has my permission to shoot me.  Seriously”.

Try to go back to sleep.  Or maybe a discreet Sherman.

A pang in the groin area. There’s something hard and woody going on down there.

Rolling off the bed he lands hip first on the floor, with a massive floorboard-shaking thump.

Now everything hurts.  Every part of his body, neck, shoulder, ankles.  Would be quicker to list the part that don’t ache.  And I only bowled five overs.

Silently groaning, he slowly gest to his feet with the grace of a three day old giraffe on ice.

Still dark on the landing.  Can’t see a thing. He opens the toilet door.  Brilliant!  The light comes on automatically when you open it.  None of that flapping about for a bit of string any more.

Deep and loud snoring is interrupted as the bedroom door slowly opens.  Light floods in as the beautiful partner brings in the bedroom tray.

“Shadow!”, she intones softly as she lays the breakfast tray on the bed.

Yes. Even she calls him that.

He unglues his eyes and surveys the tray.  An enticingly arranged plate of pork scratchings and twiglets with sprigs of chopped parsley scattered on top. Frothing pint of beer.  Schooner of port.  Glass of whiskey, shot of Tuaca, all to be washed down with a perfectly mixed Old Fashioned.  The perfect breakfast for an elite athlete.

“Shadow!”, she says, eyeing a yellow handle poking out from under the covers.  “Why are you sleeping with your bat?”

“Well”, he croaks, reaching straight for the port, “I always do that when I win PSM”

“Was it for falling over again?”, she asks gently, a hint of sarcasm in her voice.

“No”, he replies, deciding that it’s time for the first fag of the day.

“For getting smacked in the bollocks again?”.  Slightly more scornful this time.

“No”, he says, reaching under the covers for his rolling tobacco.

“Well it can’t possibly be for doing something good”, she says, with incredulity.

“Help yourself to my Old Fashioned and I’ll tell you”, he says, sitting up and pulling a rizla out of its packet.

The September sun is shining down on the Mighty Greys as they stand poised in the field.  With the iron age fort of Cissbury Ring gleaming behind him, under a Simpson’s sky, Captain Ben runs in to try and extract maximum swing from the sloping Findon pitch.

Thwack!  The Findon openers are having none of that, and the straight and midwicket boundaries get a right pummelling.

Findon are going at seven an over before Robbie finally traps an opener in the twelfth over, bringing Mr Freeman to the crease. He doesn’t last long before the Shadow gets him LBW for O, dismissing him for the second time this season.

In all this carnage, with all the other bowlers being smashed to all parts, Hammy Hoare bowls his eight overs for just 27 runs, repeatedly beating the bat and trapping “Matt” the opener LBW .  It’s enough to make you realise why he’s taken more wickets than any other Greysman in history.

The runs keep piling on.  The field gets pushed further and further back.

Ben pulls himself off, then pulls the Shadow off too.  The carnage continues as Findon reach 125 off the first 20 overs, with the opener (checks phone – Jabe?  Jase?) helping himself to 77 of them.

He tries to drive Dom, bowling the fourth ball of his first over, but outside edges it straight to the waiting hands of the Shadow (PSM) at gully.  At the other end Dimmu is bowling with pace and goes straight through Lambert, splaying his middle and off stumps.

Any hoped that we might have got through to the tail are dashed when But the runs keep piling on, mainly from the bat of Howell, who looks well set for a century.

At the start of the final over, he’s on 9, getting to 99 before losing the strike and never regaining it.  Findon have set a target of 268.  Almost seven an over required.

The way successful teams chase down big totals is to go at them hard in the early overs and get ahead of the rate.

This didn’t happen with the Greys, and after ten overs we had scored just 30, and the run rate had crept up to nearly eight an over.

All the while R/B and Dimu were going strong, we were in with a chance.  Dimu, in particular, batted beautifully, driving anything outside of, blocking on middle and smashing anything on leg through midiwkcet.

He hit 10 fours and two sixes in his quickfire 77.  It was great to watch. And he still owes us a jug,

When he was caught at long off, R/B also finished his batting for the season, amassing a total of 654 runs from 15 innings at an average over 50.  Very well batted R/B.

At 156 for 3 off 27 we were still in with a chance, but wickets fell and we eventually limped over the line with 202 off our 40 overs.  Against most teams this would have been a winning run chase, but not today, and the Mighty Greys suffered their third defeat of the season.

So that’s what happened yesterday, I said, stubbing my second roll up of the day out in the parsley sprigs, and picking up the whiskey.

I looked across at the beautiful partner, slumped against the headboard, eyes glazed over.

“You are still awake, aren’t you?”, I asked. “Really clever what you did with the bathroom light by the way”.

“Yes”, she said, jerking back into life. “That’s what I’ve been trying to tell you.  You’ve pissed in the fridge again.” 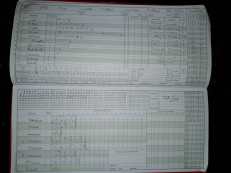