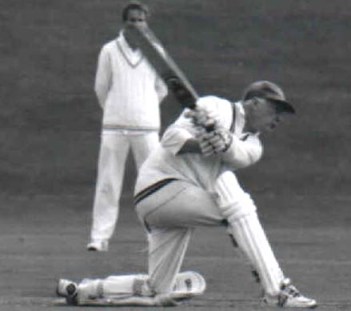 Late summer sun, a mystery virus, self-imposed exile at a reeducation centre in the West and intense cogitation under a cored water melon thinking cap all combined to convince Mighty Greys leader Biff Line to break with convention and ask Poynings to bat first on a brown dry pitch.

At first the boldness of this move seemed questionable as the Poynings openers set about the Overlord and Undertaker, creaming fours past the Greys ring of rust, with Prodger clubbing Day past Burgess’s outstretched fingers for the Grey’s first drop of the day. A reprieve soon followed as Guy “The Arm” Malyon and Alex “Stumpy” Fenton worked seamlessly together to run out Brown Cap.  A few balls later a sharp edge off Robby from the new batsman flew into Covill’s arms at first slip and then out again. The tall, blue-capped Prodger continued to bash balls onto the boundary, until the introduction of Ben “Quiet Death” Newland had the number three plumb LBW.

EO bowled well from the bottom end, arcing outswingers across both batsmen until one clipped the top of off to take out the number 5.  Neither Ibu nor Ricky (bowling too short)  had much luck until The Arm, prowling the mid wicket boundary, threw in with a single bounce and Stumpy ran out the number six.  At the other end Dave Day risked risked life, limb (but more likely plates in his collar bone) to fend off Ibrahim as he took a skied catch at mid on to finally dismiss Prodger on 80.  A late flurry from someone called Gary saw expensive runs being conceded in the last few overs as Poyning posted a total of 204.

The Mighty Greys, no longer fazed by totals of this magnitude, feasted heartily on a sumptuous mixture of sandwiches, pork pies, six types of cake and bulbous red strawberries.  These same cakes quickly saw Poynings temporarily reduced to 10 men as Prodger, having turned purple from an allergy left the field to seek medical advice.

With Jerry Brasher sitting out the game, confident that his 100 run lead in the batting trophy was unassailable, Biff and Aussie Scum Delboy set about dismantling the total.  With Poynings’ openers nowhere near the quality of the MG opening attack (but then who in Sussex Sunday cricket is?), the ball soon started to scorch the outfield as both openers arrowed the ball to all parts of the boundary.  80 runs had been scored when Line, no longer anaesthetised by neurofen and paracetomol, found himself stuck on the crease and plumb LBW.

The expectant crowd poured out of the bar areas all around the ground to welcome back Guy Malyon after too long away from MG opening line up, but his trade mark mighty and wristy lofted clubs back over the bowler’s head never materialised and he fell cheaply, soon too be followed by Alex, playing round a straight one.  The crowd retreated back to their pints as an ageing pro, stooped and gnarled by the years, ambled uncertainly and indirectly to the crease to be greeted by a far superior left hander, eyes ablaze, bat smouldering with scorch marks.

It’s early May and the Greys – not yet Mighty – are hosting an event somewhere between a jumble sale, a cricket match and a beer festival at their unofficial home at the University of Brighton.  Gale force winds are howling down the A27 and a murder of crows is screeching at the tops of the pine trees.  In the hills of Jalalabad, Ibrahim is still not yet a twinkle in his parent’s eyes.

The Greys, five years into their destiny, are mixture of the frighteningly powerful (Andy Williams), the artful (Jerry Brasher and Mike Walder) the crocked (Dave Smith and Paul Sidnell), the unkempt and dangerous (Bob Golby), the mercurial (Richard Hibbitt and Alan Dilley) and the plain mad (Andy Lulham).  Inevitably there is someone in shorts and black trainers, referred to in the score book as “man in pub”, secretly wishing he was more charm-resistant, holding a open can of Stella in one hand and a full one in the other, a fag hanging out of his mouth.

After some late night chicanery in a Southover boozer, the Mighty Greys have signed an unknown quantity on a Bosman from the Midlands.  They don’t know what he does – bat? bowl? field? – and neither does he so they hide him in the field behind Brasher and Golby and give him a couple of overs at the end.  He just looks so fresh faced and won’t stop talking.  Even if no-one’s listening!

Now he’s coming in to bat at number seven.  His pads are white, his 28 inch waist Whites are white, his eyes are keen and there is even brown hair poking out from under his peaked cap.  There is a spring in his step as he as contemplates smiting the opposition to all parts of the outfield. He is carrying Lambo, the club bat, which he swings around his head and from side to side. He takes his guard, surveys the off side and imagines the ball as it cracks off his bat and bisects Cover and Mid Off and hurtles towards the boundary, into the car park and down to the railway line.

He can see the seam on the ball as it leaves the bowlers hand.  With his foot to the pitch of the ball, he brings Lambo back above his shoulder, drops his head and swings rapidly and with conviction through the line of the ball.  Unerringly it hits the inside edge, thuds into his pads and squirts away to backward square, stopping a yard  behind the Square Leg umpire.

“Run!”, Golby shouts, already making ground towards him. “Run!”  The Greys novice, pads flapping wildly, heart pounding, reaches the other end just as the ball bounds past him and onto the stumps.  All the fielders raise their arms and turn look to the umpire.

But he’s home, and the clock is running.

The Greys veteran peers through his glasses to the umpire at the other end.  His Whites are grey, flecked with green and punctuated by holes, splits and rips.  His 36 inch waistline is overhung by a lifetime of keeping Harvey’s the brewer in business.  His head is protected by a helmet, hiding a tired mop of grey hair.  His pads still show spots of blood, a blow to the head from the helmetless days.  There are more marks on the edge of his bat than in the middle.  His legs, covered in bruises and scars, feel like planks of wood strapped to each hip.

He sees the bowlers hand above his head but he doesn’t see the ball release from it until it is half way down the pitch. Get forward.  Block.  Get forward.  Block.  At the other end the diminutive Aussie import drives, pulls, hooks and glides the ball past increasingly frustrated fielders.  All timing and intent with not a sniff of a chance.

Gary, convinced the world a personal conspiracy to annoy him and only him, flights the ball into the air and into the rough outside off.  It thumps into the veteran’s pads.  Behind him the wicketkeeper shouts so loud that the bails rattle in their groove. That’s got to be out!

No!  No!  Please no! Not now.  Not on 3999.  It will rain next week.  Balcombe will cancel the week after and then it’s the endless, interminable horror of an English winter on the downs before I get another chance.

Line, impassive behind his shades, says motionless as he quietly intones.  “Not out”.  Disbelief.  Aggression is in the air now.  Gary picks up the ball, swivels round and it pitches, leg side this time.  A tickle to fine leg.  Run!

Knees creak.  Achilles tweak.  Sweat pours down his neck.  He slides his bat into the crease, all the time expecting the ball to land and smash the stumps apart.  But it hasn’t.  He’s done it.  It took him twenty years and 265 goes and but he’s done it.  A victory for doggedness and willpower over ability and skill.

“Well done mate.  4000 runs!  Not bad” the Brisbane boy chirps, neglecting to say that he’d done that too, but it had taken 200 less attempts to do so.  And, without intending to labour the point any further he effortlessly steers the next ball away to bring up his 16th century for the Mighty Greys, and in the process puts the result beyond doubt.

9 responses to “TMG vs Poynings September 2012 by Tel Burgess”