TMG vs Lindfield, The Sequel.

It was another glorious day as the greys arrived for the second game of the two match mini-series against Lindfield CC.  The previous week had seen the Greys chase down 196 so we were confident of another victory; especially as the Lindfield youngsters were unavailable, giving the opposition an altogether more mature appearance.  The Greys had issues of their own though with our fearsome opening bowling pair of Hoare & Day in various states of disrepair and many other members of the squad in less than peak physical condition.

Biff won the toss and elected to bowl first, and with the first choice opening pair crocked responsibility fell on Gallagher and Southon, the later of which had managed to injure himself falling off a skateboard (or so he says, the wrath of a jealous husband/boyfriend seemed a more likely explanation, maybe he fell off a skateboard whilst attempting an escape).  Both of the fill in opening bowlers were able to exert plenty of pressure, keeping the Lindfield scoring to a minimum.  Ricky overcame his injuries to bowl a tidy spell, removing the number 2 batsman by inducing a top edge that was brilliantly caught by Jerry, running from behind the stumps to snaffle the ball with a diving catch at square leg.  Ricky finished his seven over spell with excellent figures of 1 for 21.  At the other end Gallagher was also keeping it tight, but the fall of the first wicket brought Lindfield’s centurion from the previous week to the crease.  With Newcombe having scored the majority of the oppositions runs in the first of the two match series it was important that he was got rid of early, and amazingly Gallagher obliged.  After getting hit for a couple of boundaries by the tall left hander, Alan managed to get one to come back up the hill to sneak through the defences of the batsman, bowling him off stump.  It was an important wicket, and as such won PSM for the day.  Gallagher finished with 1 for 13 off his 8 overs (and he was very pleased too).

Next up to bowl were Robby Hoare and Dave McHugh.  Robby, struggling with injury was restricted to coming in off two paces, and his bowling was affected.  He failed to find his length, or any length for that matter as early on a load of full tosses were bunged down, easily dealt with by the batsman.  He also had to cope with a sustained period of mental disintegration emanating from Jerry behind the stumps but overcame this to induce a couple of chances, one missed because Ricky only had one fully functioning limb and the other because Jerry was too busy thinking up his next sledge to catch a chance off the batsman’s glove.  Robby found a bit of rhythm in the end but failed to take a wicket, ending up with 0 for 24 off his 6.  Dave McHugh meanwhile was bowling well, and after a tight start got one to skid through and bowl the Lindfield number 4.  His next wicket came only two balls later, with the ball ballooning off the top edge to be caught by Dave Day at a slip.  McHugh also removed the other opening batsman LBW to finish with 3 for 23 from 8 overs. By this stage the whirling dervish that is Terry “The Shadow” Burgess had been introduced to the attack.  With flight and guile Terry bamboozled the opposition batsmen, using the tactical high and wide delivery to perfection to induce a false sense security in the batsmen.  This lead the Lindfield number seven to play a sweep about half an hour too early one of those viciously straight balls to be plum LBW, giving Terry 1 for 18 off 4.  Next it was Guy’s turn, and as some of us suspected this spelled doom for the Lindfield lower order.  Quick and swinging, Guy the destroyer removed the final 4 batsmen, all bowled, for zero runs in a mere 10 deliveries, amazing stuff which allowed the Greys to take a slightly early Tea with the target set at 102.

When it came to the second innings Jerry and Biff were merciless, taking advantage of some gentle bowling and less than stellar fielding they smashed the ball to all parts.  Biff struggled to find his timing early, and gave a chance to mid-on, but was soon in the groove.  Jerry played well from the off playing a number of lovely shots, special mentions for a perfect square cut up the hill, and a smashing drive through extra cover.  In the end almost every ball was flying to the boundary, and the game was put to bed by Biff, who having found his timing played a couple of glorious shots, including a sort of back foot punch over mid-off for 4, and then the shot to win the game, a sashay down the pitch to smash the ball over mid-wicket also for 4.  In the end it took a mere 12.3 overs for the Greys opening pair to knock off the runs for a 10 wicket victory, Biff scoring 54 and Jerry 44.

It was a comprehensive victory for The Greys, overcoming our own injury problems and putting Lindfield to the sword for the second week in a row.  It was a shame that a few of us missed out, Alex, Dave the vet and Double D didn’t get the chance, but in the end TMG were just too ruthless.  There was one upside though, an early finish and more time to drink beer in the sun before heading back to pub.

An excellent day, and remember, Don’t Fuck With The Mighty Greys!

PSM, Alan for the ball of the century. 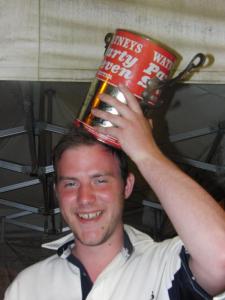