It was a lovely sunny day; just like last Sunday, and the Sunday before that. We set off from HQ in high spirits, listening to the Stepkids, and talking about the game. After about 15 minutes, just as we were being tortured to a standstill by a traffic jam filled with Kia Seeds, and Pomegranate-tinted 4x4s – Dom noticed that Zack had been sarcastically driving East instead of North.

After queuing for a completely unreasonable amount of time, we got the car turned around and headed West – although with the benefit of hindsight, everyone (including Ibu), is now prepared to admit that Northwest would have been a better choice.

After one or two minor mishaps, we arrived at the game just in time to see Our Glorious Leader and Jerry “jug avoidance” Brasher going out to open the batting.

Zack’s forgotten his trousers; Our Glorious Leader provides – even as he plays a crisp square cut for 4 (PSM nom) – such is his power and his wisdom, and his grace, and his open kit bag generously stocked with spare kit.

Warninglid boasts a beautiful tree-lined cricket ground, bordered on two sides by rows of single and double-storey brick houses, fringed with rambling English gardens and enthusiastic hedgerows. The occasional splash of Ivy; a smattering of Marigold, Delphinium, Hollyhock and Peony. Roses round the doorway, Lavender down the paths. Thick green grass. Smiling dogs.

To the south of the pitch are about half an acre of fairly well managed allotments, they’ve got these little three-quarter sized sheds – in varying states of disrepair; mildew and rot creeping up out of the long grass, walls dusted green with algae; paint peeling on the window frames.

Somebody is growing potatoes. I sense Radishes, Spring Onions, and tiny sprouting Lettuces. I hear the booming of Marrows, the steady hum of Carrots, the reedy notes of the Rhubarb (a bit like an oboe or a bassoon), huge sulphurous Cabbages rubbery squeaky, Tomatoes chiming in here and there, a fizz of Nettles, the crackle of the Brambles like the needle on old vinyl record – probably the London Philharmonic belting out some rousing old empire days tune.

England on a summer’s day. Not a cloud in the sky; Not a copy of the Daily Mail in sight.

The nightmare of EU oppression had faded these past months, and seemed now little more than a faint memory of a dream of another lifetime lived out in a distant land, where there were people who knew about cooking and could speak More Than One Language.

First to go was Jerry. Ridiculous bounce. Pitched up, maybe back of a length but not short; whistled past his chin, grazed a glove; caught behind for 13.

Burgess and Fenton both fell victim to the bowling of Parsons and the catching of  Hollingham, both out for 0. Double ducks.

After a long and hard fought innings Our Glorious Leader was at last undone – caught at point for 39.

Dom “the Dominator” Ashton owed us some runs this week, and we were not disappointed – it was fine knock, some glorious strokes, timing it nicely. He wasn’t bothering with running singles today – his scoring shots were five 4s and a 6 lofted casually over mid-wicket (PSM nom). Sadly some clumsy footwork got his toes tangled and he stood on the sticks before he could really rack up the runs; gone for 26, out hit wicket.

People sometimes call him Zack “the Rememberer” because he’s good at remembering stuff. Also, Robbie sometimes calls him “Scrapper Dykes” because of some sort of altercation with a nauseating sleaze-gnome who just wanted to be “friends”, Zack can’t remember any of it though because he was drunk. On beer. All kinds of other things probably happened that night that should probably be accounted for. Someone probably should have issued a press release and public apology.

After getting over-excited and trying the smash the first ball for 4 through cover, Zack managed to calm down a bit. Couple of singles, a four, a two. A straight six back over the bowler’s head (PSM nom). Made some runs; scrappy performance. He needs to sharpen up his technique a bit, show a bit of discipline, stop mumbling.

Solid work from Gallagher, steadying the ship, and making a 52 partnership with Zack. Blocked it out for 19 dot balls, and was just starting to make some runs when he caught a leading edge and skyed one, caught by the wicketkeeper. Out for 8, but a good knock, including 5 penalty runs after the ball hit the wicketkeeper’s helmet (which was laying on the ground) – that’s twice in 4 games, last time was at Ansty.

In comes Newland, smashes his first ball for 4. Zack tries to take a quick single that isn’t really on, Ben sends him back, run out for 44.

Next is Azami, a few nice shots before getting trapped LBW despite taking a fairly decent stride down the wicket. Out for 4.

Then a couple long-legged loping singles from Sewell to wrap up the innings.

And we all go off for Tea in the white clapboard pavilion; a long wooden table for each team piled with sandwiches and cakes, a big pot of tea and a jolly matriarch called Joan to pour it.

The Warninglid openers stoll out to bat, wiping away the donut crumbs and having a last few swigs of tea before they take to the crease.

The wickets come quickly, the first 5 go to Newland. A sharp catch taken by Azami, a classic LBW, then a clean bowled – crashed into the base of the stumps to take out Parsons who’d caused TMGs so much trouble with his bowling (PSM nom). A catch by Zack at cover which got a PSM nom for being nonchalant. “.. the batsman really got hold of it, and it was still rising, but I didn’t really have to move or anything, just had to hold on to it”. Next was a tidy catch by Gallagher at slip to wrap up the run of 5.

A couple more wickets fall and the Lid are 37 for 7 off about 16 overs.

And The Mighty Greys turned as one and said “SEWELL”.

Sharp stop by Dom’s knee at midwicket, left a nasty bruise but saved a certain 4.

Terry’s weedy throw at the stumps. Dead on target, but just not powerful enough to take the bails off.

Despite our best efforts the Warninglid no. 6 and 9 clung on, creeping up the run rate, until their no. 6 finally fell to the bowling of Gallagher with a good yorker, line and length, just swinging in a bit. “I actually meant to bowl it there as well! Quite pleased with that!”. (PSM nom).  Solid bowling from Gallagher, unlucky not to get more wickets.

Next to go was no.10 – the victim of some top bowling from Azami who beat the bat and got a sharp stumping by Jerry. He was unlucky not to get a third wicket with a near perfect ball (PSM nom) that got an outside edge, but just beat Gallagher at slip.

The Lid were creeping closer. As they passed 150 the Greysmen were getting desperate, the nerves were getting to Newland who took his 2nd not-catch of the day, which was a multiple not-catch with extra juggling (PSM nom).

Then, praise be to Our Glorious Leader, their no.10 scooped one towards short mid off and Zack scampered in from extra cover to take a decent diving catch (PSM).

“That was closer than it might have been. Well, it was closer that I thought is was going to be when they were like 42 for 7 or whatever it was” – Ian Sewell

Don’t fuck with The Mighty Greys!

P.S. I’d just like say a special big up going out to today’s square leg umpire Rick “the Hat” Hatrick, who took to the field again today for the first time since he injured his knee back in the spring of two thousand and fifteeeen. Big ups bruh. Peace yeah. 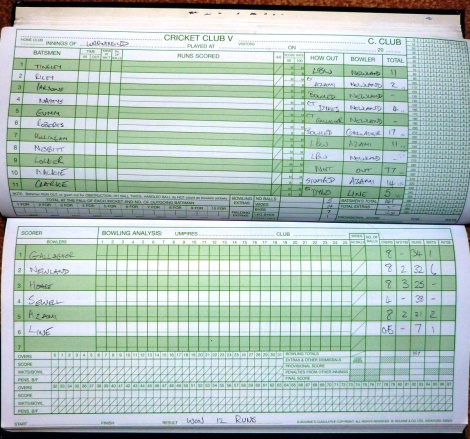 and some pics from the pub before the match… 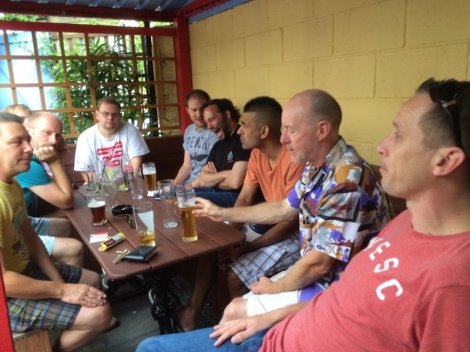