The sun beat down as we approached our destination, the piercing blue sky streaked with sinuous cirrus clouds whisked into feather shapes by the high altitude winds of the English Channel. This was it, our date with destiny had finally arrived after months of planning and meticulous preparation, and the stark reality of what we had been training for all winter and early summer was upon us at last. D Day. Destiny Day? Decision Day? Designated Day? Damned Day? What does it stand for? In the words of the Young Disciples, apparently nothing, but we have our very own D Day, and he may not be the greatest amphibious assault ever launched, but at least his D stands for something. The Brunswick Village game is a harbinger of impending Mighty Greys invasion of Devon  as much as a Mulberry floating harbour was a sign of the imminent Allied invasion of Normandy and it gets the mouth watering and the organisational juices flowing. Plans are formed, drivers designated, chefs appointed, Jerry gets the beer and the madness of a Greys tour, a true test for body, mind, spirit and liver begins to take shape. Establish bridge head, knock out German machine gun, eat scones and drink Harvey’s. All in a day’s work for a touring Greysman/Allied soldier.

We started our pilgrimage to Santiago de Montefiore in fine spirits and were even able to praise the driving skills of Ian, who managed to not crash on the approach to Ditchling Beacon, despite the attentions of a car heading straight towards us on our side of the road. The sanctuary of the car park duly secured, it was game on as we greeted the ever friendly Villagers and watch with baited breath to see if Skip would spare us the sweaty torture of fielding first on the hottest day of the year so far. This he did, and he relayed the news to us with the universal sign for “we’re batting”, ie the walking, one handed, imaginary forward defensive.

Shorn of Jerry from the top of the order due to complex selection policies, and a sore thumb, Del continued as a reluctant opener and never really hit the smooth flowing run accumulation to which we have become accustomed. Citing a hangover (since when has that been a excuse ? It makes most Greysmen bat better- maybe that’s what being a proper cricketer is all about), he was well caught behind, after an innings which was naturally still peppered with some lovely shots.

This brought Guy the Destroyer Malyon to the fray, who wasted no time in setting about the BV bowling attack, ably supported by Biff, who was steadily building an innings at the other end. It has to be said that the Destroyer is giving the Greys middle order some much needed respectability, in the form of runs as well as GBH of a cricket ball. He didn’t clear the boundary this week, although he came bloody close with a huge hit over wide mid-on(moo), but he hit 11 fours over the quickish outfield with characteristic wristy force (oo-er). He slowed towards the end of his 79no, not surprising in the energy sapping heat, similar to the Amazon Jungle where The England Football Team will soon be delivering the familiar agony of renewed hope, but it was still a mighty effort, and will have done his average the power of good. Watch out Del. Biff stayed with him for most of it, while still not in the form of his life, played some decent shots and made a very useful 45. Terry soon followed, falling victim to his 5 part trigger movement, which brings him in small increments straight in front of the stumps, given LBW. I came in and tried to give the strike to Guy by running quick singles, just at the moment he had lost the energy to wield his slightly less than legal bat, and along with D Day, we helped to bring the Greys total up to 206 for 5, with Dave stumped off the final ball of the innings.

Tea was up to usual muster, with a very nice Lemon drizzle cake which may well have helped the wind section in the slip cordon later on. St James is a very pleasant place to play a game of cricket and to watch too, being close enough to Brighton to lure not one but two spectators (specgreytors, anyone? I’ll get my coat) in the shape of sore thumb Brasher and David save the world Hadrill. Well, one of them had flown in from Thailand, to be fair. That’s the kind of pulling power we actually have, people. He may be being affected by the new Thai environment, however, as he’s was talking about framing a Harvey’s beer mat and not coming to the pub as he was going to see some nightjars. There was much talk of tour and people dropping out and in and out again, general excitement of those of us not too busy with insects to be going to Devon, and other nonsense and it was back to the matter in hand.

Keeping wicket always gives you a different perspective on a game, and let’s you witness the quality of our opening bowling pair, Overlord and the bowler formerly known as the Undertaker, who I’m now calling the Enforcer, cos of being a rozzer in disguise and that. On a slow wicket they managed to extract some life and extinguished any hope BV had of getting off to a quick start with tight bowling and the Enforcer even getting in on the fielding act with a great throw to the far end to run out Simon “Mulf “Mulford (??? Man you’d…… actually, let’s not go there). Rob was unlucky to remain wicketless but figures of 9 runs off 8 overs don’t lie, and with Dave finishing with 1 for 15 off 9, BV were struggling. Enter the main bowling story of the day, the returning Ian Sewell, he with the mystical approach to numbers. He’ll like these ones….well, some of them anyway. After going for 24 off his first 4 overs with 1 wicket, he then found a superb rhythm taking 3 wickets for 3 runs in his last 4 overs, giving him a Sussex Baker, or Forfar. This included 2 in 2 balls, and damn close to getting an edge with the third one. The first of these balls was to remove the dangerous Arosh, who top edged one down leg side. I stuck out a hand and  lo and behold the ball stuck for PSM. Southon Man didn’t lose his head and despite almost certainly forgetting what his good book said (probably only Terry and Ricky will get that one, but don’t worry if you don’t get it, because your not missing much), bowled another tidy spell after yet another dishevelled night, getting one wicket with his worst ball.

Our assault on the BV batting line up was looking promising, and despite the game being village rules, the opposition had not exactly deserted the bunkers, even if a counter attack was now beyond them. Shrieves’ arrival at the crease, however, precipitated a change of policy, and things began to slow down as the overs slipped away. Apart from the occasional smashed 4, it was solid defence, as Mr Shrieves is no mug with the bat, despite claiming to be falling to pieces (and incidentally may have played more games against the Greys than any living human- which obviously doesn’t include Stan). A change of bowlers brought no change of fortune, with Alan Ant Gallagher bowling nicely, swinging the ball both ways and going for only 4 off four overs, but no breakthrough. Hat Rick faired no better at the other end, with the Villager Hawthorn taking a bit of a liking to his bowling and hitting some perfectly decent balls for boundaries. He also had a bat of dubious legality, fitted with a thin strip of oak. And so with a final throw of the dice, Biff turned to Overlord to see if he could break the partnership. He produced a low snorter which took the edge, but your humble scribe couldn’t keep up his end of the bargain, and the chance hit the deck, like a dead squaddie on Omaha beach. In a surprise twist, Skip found another dice, and threw Del into the mix to try to twirl them out, but it was to no avail, and BV managed to hold out for a draw, finishing on 107 for 7.

A couple of pints at the bar watching the sun go down and looking at photos, Biff discovering that his new stance looks a bit odd, and cooling down preceded our return to Brighton where we were given a an accountancy lesson from Ian (basically, its none of your business) and an audio treat from Ricky and his mobile disco, although I’m not sure the carrier bag full of sandpaper really is the best transport system for your 7″s, mate. Don’t know who told you that but reckon they weren’t Bill Whithers fans. It was, however, a lovely day, as is Dave. Roll on tour. Do you ever want time to speed up? 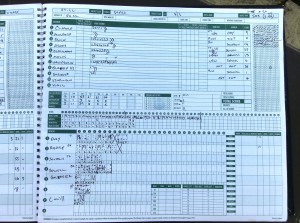