NEWLY-APPOINTED TREASURER USES OWN WALLET AS TREASURY – TEAM LOOKS ON…

Any of the above would, of course, stand as worthy headlines for The Mighty Grey’s recent skirmish over at Poynings CC, but personally this Greysman is plumping for the ‘theme tune’ option if only to push for the John Barnes-style ‘motivational rap’ needed from ‘Biff Doggy Biff’ should this melodious pipedream ever become a harsh reality.

En route, yours truly had quizzed Robbie H as to where he’d got ‘the black eye’ from… only to discover it was just Robbie’s really old face. (Thanks again for the pint though Rob – you’ll always be my special Streethawk…).

IO, on the other hand, looked positively radiant and (relatively) crease free, raising team suspicions as to a possible £200 botox blowout…

Little however, could prepare Heaven’s Eleven for the moment a real actual proper horse animal came into the pub as we were about to set off. 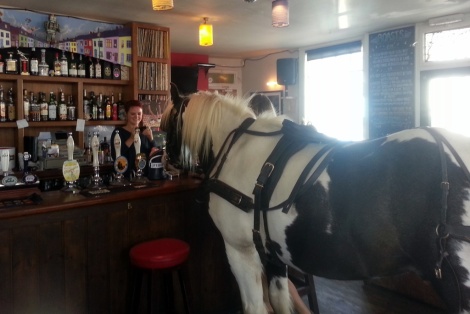 With a horse as our logo surely this was a fantastic omen for the upcoming match, despite the fact that said horse wasn’t in fact grey at all and – far from being ‘mighty’ – looked pretty bloody close to the knacker’s yard – while giving off an air of serious fatigue at the prospect of another day being pimped out across the pubs of Hanover… 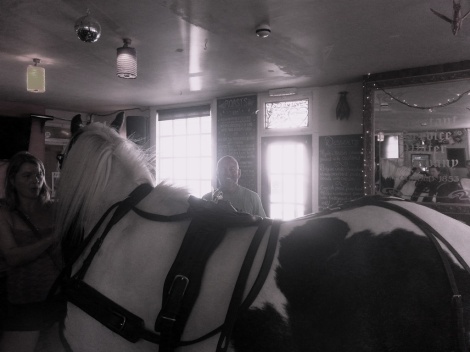 It’s species hadn’t, after all, spent the last 55 million years evolving in order to be  paraded around like some kind of odd-toed ungulate mammal bitch without getting seriously paid…

With the horse debacle over, the Greys set off to Poynings (ahem) ‘gee-geed’ up at the possibilities of a victorious afternoon in the field.

As the barbeque coals sparked to life and Biff strolled out to the square with the opposition captain, Alex took a private moment to feast his eyes on the similarly framed skippers. As he soaked it all in with clear relish, internally admiring the duo’s shapely calves as they glowed agreeably in the midday sun, lips were licked.

Never before has a Greysman seemed so at peace with the world, veritably swimming in the pastoral glory of the rural bliss that surrounded him, while greedily lapping up the lower leg-porn on display.

He took the opportunity to point out to the rest of his team-mates that said slender calves had a startling similarity to one another and smiled blissfully to himself, lost in the carefree joy of a good pair of muscle-twins.

But, just as yin circles yang, as sun begats moon and as heads is oft required to surrender its charms to tails, so Al was to turn defiantly on his (high) heels.

Sure enough, later that day, the universe was impelled to restore its balance once more.

W.G. Grace chuckled as he flipped fate’s cricketing shekel in heaven’s pavilion and – there in a small tranquil corner of the Sussex downs – the Greys would come to see a wholly different side of Al as (OOOHH EM GEEEE!) his dormant inner cat-bitch clawed it’s way through that frail, paper-thin metrosexual shell.

The man-calf-loving starry-eyed Jekyll didn’t stand a hope in hell against the vengeful, bitter wrath of the Hyde he had awakened, both raw in anger and sooper-faaahbulous.

Have the Greys found their ‘catty-bat’? Will the ‘Red Tormentor’ unfurl his manicured ‘spite-talons’ and hiss once more?

Only time will tell… but in the meantime here’s some artist sketches of the possiblilities. 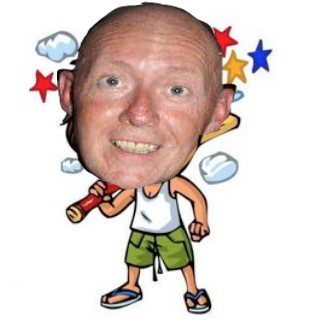 (sorry Al, couldn’t resist. I like it when you get angry…) 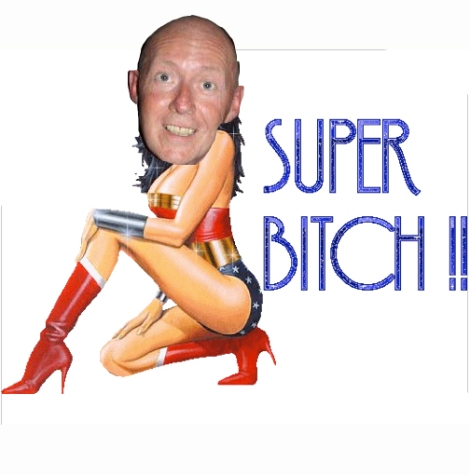 To the field and the swift removal of Edwards for a duck via a sweet seamer from Alan that found it’s way into he-who-shall-not-be-named-until-he-buys-us-all-a-pint’s gloves (and not the other way around).

Despite a shortened run-up (and somehow managing to see through the loose eye-skin), Robbie H once again did us proud, dispatching opener Wallace-Gayler (15), Jones (18) and Royle (2), all expertly bowled. With two fine maidens in tow, this was an economical display well worthy of note (3/22).

Comiserations to QB… No wickets, despite three dropped catches presenting him with the firm right to opt to never speak to Terry ‘it was the Sun’ Burgess, Ritchie (at least he was watching the game) and the ‘match-quitter’, he-who-shall-not-be-named-on-these-pages-again-until-he-buys-us-all-a-pint.

No. 3 Barnes kept his nerve and, with unwavering constitution and canny placement, cut, pulled and drove his way to 33 before a decisive field placement change from Biff led to a lofted swipe that headed straight down the throat of yours truly and marked the beginnings of a career-best spell from Ritchie P.

Biff soon had his moment (literally) in the sun too as he sent T. Brookes packing with a stoic catch from an ambitious six-searching drive – sturdy stuff.

With puffed-up ‘battle-chest’ on full display, Ritchie had finally scored a Michelle with a five-wicket haul, achieved via a fruit salad of full tosses, tempting fake in and out swingers stoically presented both outside off and leg stump and straight ones that rattled the furniture to remove Brennan (who dragged it onto the stumps) for 5, Newing (2) and W. Brookes (41).

(Seriously though Ritch, great fluid bowling there mate (you still good to pick me up at 12ish next Sunday yeh?).

Good to see Double D back with a solid late spell too and certainly deserved of a wicket (had Ritchie not mistaken boundary duties as ‘time off’).

In amongst DD’s 8 overs came the non run-out that landed PSM. Yours truly managed to strike the pegs with a sizable portion of luck and some severely debatable professionalism.

The first cricketing barbeque of the summer was welcomed by all… but Biff.

Fortunately a tray of sarnies (only just) pointed out in time did well to fend off the rising Hulk-rage we all know and love him for, leaving the way clear for Al to borrow the anger mantle a little later on.

In to bat. Brennan’s alititude-heavy presentation straight into the sun tempted Jerry down the wicket as he popped one straight up and was caught. Previously, Biff had played some excellent strokes before Newing’s delivery straightened up and bowled him for 12.

‘They’re keeping low at this end Rik’, he shared as we passed on the out-field.

Almost immediately one kept low at that end (read ‘great delivery badly handled’) and yours truly suffered the death rattle – out for a duck – making way for Alex to build a superb innings. From a nicely tempered start came a flurry of purposeful batting in all quarters of the field. A clutch of boundaries, well run quick singles and much more, marvellous stuff Alex.

Tel showed off his legendary pulling techniques too and reached the rope on several occasions before a lupine howl indicated his frustration at skying it straight to T.Brookes, who held firm.

With DD came the commencement of a superb showing with the blade, including  several stunning cover drives – and more – that made the onlookers swoon as our total ticked over nicely.

As a stoic partnership built, things looked briefly shaky for Al when a floater from Poyning’s elder statesman – once more via the sun’s rays – led to a strong appeal for LBW, but to no avail. As umpire QB took the firm protestations like a man, he informed said looper that he couldn’t give anyone out LBW if he couldn’t see the wicket for cricket jumper… tensions rose as a result.

Then, to further charge the electricity in the air, came that ‘Meooooow’ comment…

The ‘Top Spinner’ – as they called him – perhaps a little keen to quicken the over rate, came in just as Al looked up…

‘I know you’re game’, growled Al in the spinner’s direction (with a far more sinister post-watershed subtext). The gloves were both on and off simultaneously as the ‘Red Tormentor’ showed a feline streak akin to Naomi Campbell on Red Bull.

Meanwhile, unfazed by his partner’s bitch-fit, DD strode on to 40 before sending a drive into the hands of a young boy in the outfield, putting an end to a partnership that had TMGs believing they could go the distance, particularly when Al’s hard graft led to his deserved half century soon after.

It was the second time in the match that Alex had got the horn.

It is at this point – dear fellow Greysmen – that I urge you all to click this link of a sad dog, left alone in the rain, in order to render a suitable mood to accompany the reading of the remainder of this match report…

Greysmen old and… er… older, my cricketing brothers, despite Ritchie P’s bowling masterclass, despite the proud efforts of Double D and ‘Nutjob’ Fenton at the crease, despite… well… despite everything… the Mighty Greys were once more to fall short.

Once more the Greys were forced to surrender their mightydom. Once more Sunday’s soldiers couldn’t quite muster the strokeplay needed to snatch victory from our oh-so-youthful adversaries.

IO, run out for one. QB, bowled for 8. Ritchie, caught for a duck. Ballbags.

Although Alan valiantly fought on and got down the wicket for anything vaguely hit-able, the match soon slipped out of reach. One ball to go…

As Robbie H took to the crease, with him came one last heroic, air-bothering swipe of the blade.

Our hopes of a final 12-run match-winning super-stroke were dashed as cherry nested in mottled glove – it was all over.

WILL ‘THE BATTY CAT WITH THE CATTY BAT’ MAKE A RE-APPEARANCE?

WILL HE-WHO-SHALL-NOT-BE-NAMED-UNTIL-HE-BUYS-US-ALL-A-PINT BUY US ALL A PINT?

WILL THE ‘BATTLE CHEST’ PUFF ONCE MORE?

WILL BIFF CHOOSE DEL OVER THE HORSE?

WILL OUR SERIOUSLY LOOSE LOGISTICAL PLANNING FOR NEXT MATCH RESULT IN ANYTHING OTHER THAN ALL-ROUND CONFUSION?

FIND OUT NEXT WEEK… 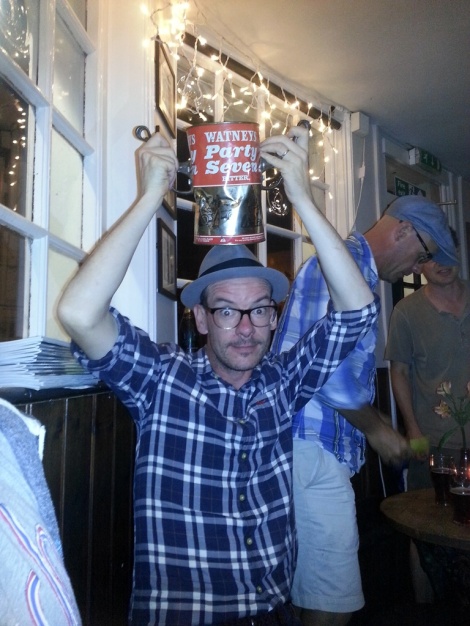 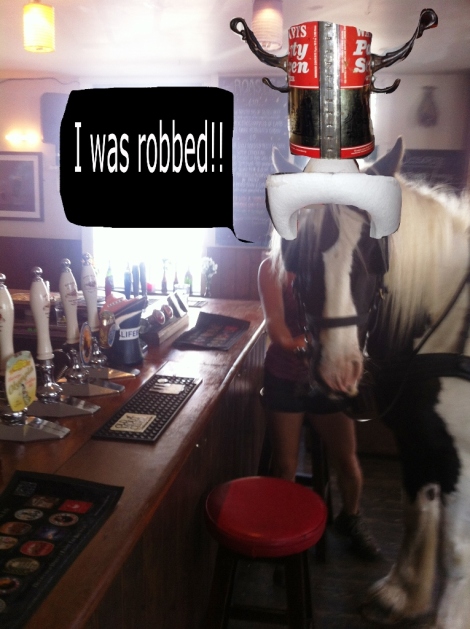 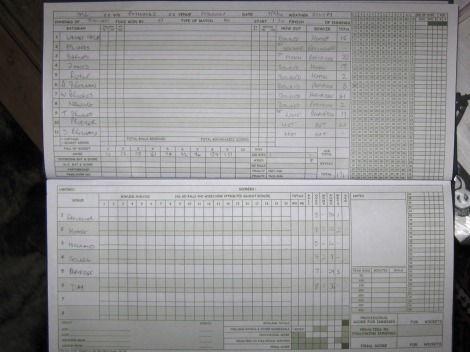 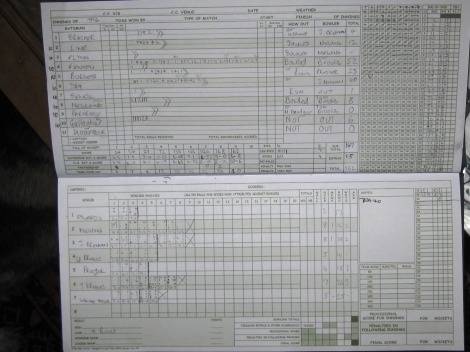 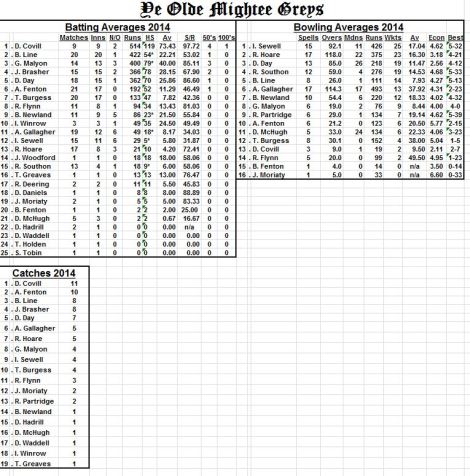