After enduring what seemed like weeks of torrential rain, and the Shadow’s endless Autumn Fashion Tips, the Grey’s were blessed with a glorious sunny day for the last match of the season.

After several agonising minutes of suspense, Terry, who had been acting as referee, came down from the mountain (or should I say ‘hill’), bearing two stone tablets; the first was inscribed with The Village Rules, the second declared that Comrade Biff had won the toss and elected to bat first.

After that, Balcombe took to the “field”, which was actually a large upturned pudding bowl covered in playdough and grass. [see diagram 1]

Things got off to an ignominious start, the first three wickets fell quickly.

Brasher caught at square leg for 1, Line caught at point for 4, Hoare run out for 1.

The Greys groaned, the sky darkened, God was looking sickly.

Dykes in at number 5, gets off to a shaky start, flashing wildly outside off stump 2nd ball. [see diagram 2]. 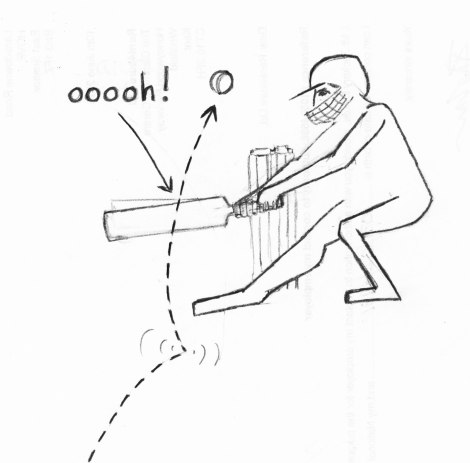 Slowly gets his shit together, starts to make a few runs. Keeps going. Tonks a few 4s. Then he taps the ball gently to the fielder at mid off, who drops it. Try again; the next ball is identical to the last – short, slow and wide, again he taps it straight to mid off, caught. Out for 57. First 50 for the Greys.

Solid 5th wicket partnership of 109 from Dykes and Burgess.

Terry ‘the Shadow’ Burgess has been on fine form this season, he sees out most of the TMGs innings, helping himself to a magnificent 76 runs, and sauntering to within a gnat’s whisker of being leading run scorer for the season.

Next its Woodford at the crease. Great display of power, smashes a lovely six off the second ball (PSM nom).

Ashton retires hurt after the third ball, troubled by a shoulder injury he picked up at Arundel – where he scored a tidy 36 in his first match since 1997.

The Balcombe openers stroll out onto the field. Gallagher and Newland open the TMGs attack.

Newland looks threatening, gets an edge, but it’s dropped at slip. Gets another edge but it falls short between slip and gully. Then at last the breakthrough comes, textbook bowling from Newland as Dutton edges a looper to gully.

Woodford is keeping wicket for TMGs today, giving Fenton a bit of respite, and a chance to do a spot of bowling.

After witnessing what can only be described as a fairly lackadaisical effort from Balcombe’s keeper during the first innings, Woodford shows him how it’s done.

Gallagher charges in to bowl, good bit of pace, little bit short of a length, beats the batsman, it comes through chest high to Woodford who takes it on the chin; slight grazing, not much blood.

Next wicket falls to Fenton’s sly offspin attack; beats the bat; stumped by Woodford. Balcombe are 64 for 2.

Some parts of the pitch were a serious challenge for the fielding side [see diagram 3], but we battled on anyway. 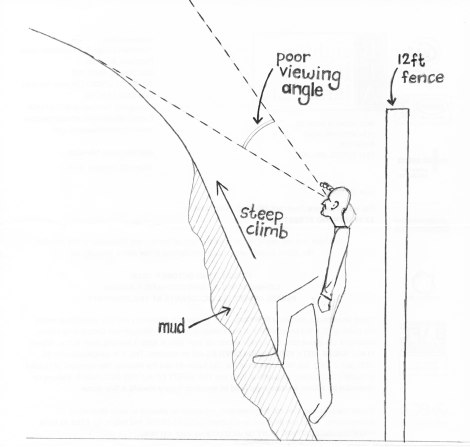 The game was looking tight, Balcombe were managing to keep up the run rate, and TMGs needed wickets. Azami bowled well but the breakthrough didn’t come. Solid bowling from Line taking out Diggins before he could to do too much damage, LBW for 20. Brasher next into the attack, he quickly takes the wicket of dangerman Mitchel a.k.a The Giant, caught behind for 6. The next (junior) Mitchel takes to crease, he toughs it out, but Brasher shows no pity for wee lad, tearing through the top of off stump with a peach of delivery.

TMGs we’re looking like they might just snatch this one away from Balcombe despite the best efforts of their opener, Botting, who was nearing his century.

The next batsman proved a tougher nut to crack, he managed to eek out the runs, despite TMGs fiercest efforts, and eventually the pair managed to nudge Balcombe over the line with seconds left on the clock. 178 for 5.

A solemn moment followed as Biffo Line, our glorious leader, gathered TMGs in the dressing room to announce his resignation as Captain of The Mighty Greys.

This truly was the End of the Line. [see diagram 4] 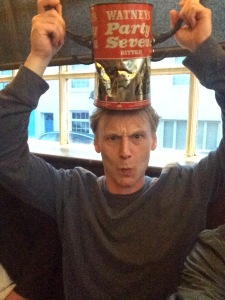