I haven’t slept for days. I’ve started biting my nails and if there was any I could grab hold of I’m sure I’d be tearing my hair out too. I look down at the introduction I’ve written in my notebook:

Not 20 minutes since the last ball was bowled, a ball taken at slip by Southon to see off the last of the Angmering batsmen, we sat on the steps of the rec ground pavilion watching the sun finally disappear over the horizon. As Jim Morrison once said, “this is the end”.

But lets start at the beginning. Well, my beginning at least. A little over a year ago a Greys team sat, inevitably, round a table in the Constant Service having just been soundly beaten by Balcombe. Scanning his drunken compadres and smiling, the captain with the threatening sounding nickname turned to me and said, “mate, this is the greatest cricket team in the world”……….I didn’t quite understand what he meant.

It’s too prosaic. I think back to how disappointed Eeyo was with my first match report. “It’s fine” he said, “but its a bit boring. A match report can be anything; it doesn’t have to be like one in the papers. Use your imagination”.

I glance back at my intro. “my beginning” just sounds so pompous, and the Jim Morrison thing just seems forced. I mean, if I was going to litter the whole thing with Jim Morrison quotes then maybe it wouldn’t seem so out of place, but Alex has already done that brilliantly with Prince – and Prince had just died when he did his so it actually had some context. This is just shit.

Need some inspiration. I flick through some of the pages of scrawled notes I have on the match:

Rikki bowled his first ball completely naked! You don’t see that every day.

You really don’t see that every day. This is good material; I’ve got stuff to work with here. Why can’t I find an angle on this?

I think back through all of this seasons classic write-ups. Ben’s incredible, sprawling, stream-of-consciousness work of genius from the Sidbury game on tour, Alex and Tel’s Crossword, Zack’s flora-and-fauna-obsessed ramblings and (to my mind, the funniest of the lot) Eeyo’s incredible cross-channel report written in conversational franglais. This has become just as competitive as the actual cricket; and this is the last one of the season! It’s got to be good!

I can’t take the stress.

My computer makes that ‘PING!’ noise. Psychic Terry The Shadow, sensing my torment from an office somewhere in Kent (I presume), has sent me an email:

Dom – when we play a team with someone called Phil Mitchell in it, surely the MR writes itself? I wanna be Dot Cotton – nailed on!

Terry you fucking genius! Yes! Why did I not think of that?! Of course, Eastenders. Suddenly I feel calm, my shoulders relax, I’ve stopped sweating so profusely. Terry has rescued me. It will write itself. Terry wouldn’t lie. Ok, Eastenders, here we go……

Slowly it dawns on me…..I haven’t seen an episode of Eastenders since 1989. I email Terry back:

Tel – I need a bit of help. Which Greysmen would be played by which Eastenders character?

Terry responds with the speed of a man who is perhaps only pretending to have a job and actually spends his weekdays watching and re-watching Eastenders omnibus’ he records on Sundays:

Alex is Ian Beale, the small businessman with his finger in every pie.

Biff is very obviously the real Phil Mitchell – the Angmering one is an imposter.

Masood the Muslim postman is either Jerry or Ibu or both

Rikki is Kush – he goes round getting all the women pregnant

I’m afraid you’re going to have to be Grant Mitchell.

Robbie is the policewoman whose name I can’t remember, or Les Coker the undertaker.

Alan could be either Jay or Billy Mitchell.

Someone (don’t know who) could be Martin Fowler, who runs a fruit and veg stall. He’s tall and could probably bowl a few Jaffas (sorry!)

Also Patrick Truman, a West Indian stereotype who came over in the 50s and still listens to ska, drinks rum and spends his life in the bookies.

I am still Dot Cotton, a decrepit old woman who is the moral compass of the programme.

Not that I’ve ever watched this programme of course.

‘I know Dot Cotton’, I think, and I’m aware of Phil and Grant Mitchell just through cultural osmosis, but nothing else really means much to me. Have I got time to watch several hours worth of Eastenders to get caught up? I start sweating again. I’m not the man for this….

“You are the most mentally-fragile cricket mat…….”

“You’re talking yourself out of it”

I go back and leaf through some more of my notes from the game:

Ben yet again bowls beautifully and gets his career-best figures of 6 for 7! He now has a Greys record of 45 wickets over the season.

Fucking hell, that’s incredible. I owe it to Ben to preserve these accomplishments in some sort of decent written form. I’m letting everybody down. There’s got to be something here I can hang this whole report on:

Evil Ben hits a great boundary on his way to scoring a fantastic 25!

Why oh why do we do PSM and not man-of-the-match?? Evil should be writing this fucking thing! He scored loads of runs and fielded brilliantly; I basically did fuck-all compared to that! Come on, please, inspiration must be somewhere on these pages:

Jerry looked imperious. An incredible upper-cut for 4 over the slips, a meaty pull and another mighty blow over extra cover. He just looked so…….strong.

I start to panic.

I turn and look at the dog sat on the sofa behind me.

“Just scrap all this and do a song,” she says, “You could do a cover of The Streets but change the words to be themed around the game”. She starts to sing, “dry your eyes mate, I know its hard to take but the cricket season’s over……”

I’m having a nervous breakdown. I need to sleep. I can’t do this, it’s too much pressure.

“You are the most mentally fragile crick…..”

I look back at the notes. One last try to find a way in. It doesn’t help. As I flick through, the notes get ever more scrawled and less descriptive:

Jerry’s low catch behind stumps off classic ‘one that just leaves you a touch’ ball from Alan.

Terry straight drive all along the ground past bowler for 4. Magnifique!

Arrrrrghhh! These are all just things. I need a fucking IDEA!! Last report of the season!!! Somebody help me.

Fuck it. Fuck this. It can fuck off. I’m not going to bother with any stupid ‘angle’; all these match reports are getting too fucking pretentious anyway. I look back at my intro.

‘That’ll do’ I think to myself, ‘Wash your hands of it’. Intro, a few of the notes sorted into sentences and then basically all you need is a few of paragraphs to wrap it up:

Not 20 minutes since the last ball was bowled, a ball taken at slip by a completely naked Southon to see off the last of the Angmering batsmen, we sat on the steps of the rec ground pavilion watching the sun finally disappear over the horizon. Its a nice scene. Calming.

I thought about the season. Biff carrying his bat at Luppitt after a two-day bender, Terry defending 24 dot balls in a row to rescue what would have been a certain defeat in Ben’s first match in charge, Alan’s unplayable spell of fast-bowling at Denton, Eeyo cooly winning us the game in the last over after a great team performance at W.G, me and Zack going full Lincolnshire at Bodle Street, Alex’s knock at Streat, Ibu bowling like a wizard for the last few months, Robbie’s metronomic brilliance, Hat-Rick coming to half the games despite being injured, Double D touching a man’s willy, Wig getting 65 at Denton then not playing again to protect his average…….the list is endless.

Sunday cricket. Civilisation at its most civilised. Days in the sun, in the country air. Applauding strangers on and off the village green. Two spectators, an old man and his dog – they’ve seen it all and they know what’s important. Outside. Together. You look after me and I’ll look after you.

A Pine-Marten swoops down and lands on the fencing by the pavilion steps. He tips me an approving glance. ‘Good to finish with a win’ he says. Too right.

It’s time to go and get back to the pub. I turn to the captain who’s named after a cuddly bear and say, “mate, this is the greatest cricket team in the world”. 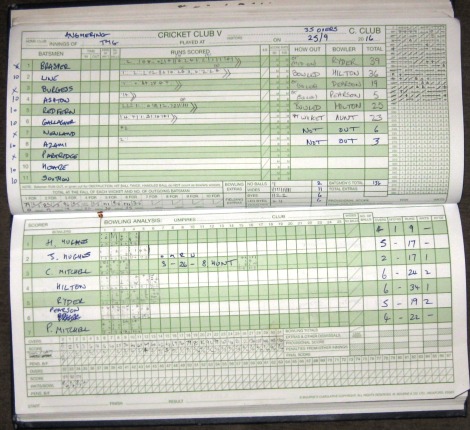