Yes the match report…Balcombe  come fraggle rock! From the sublime to the Rickydickulous!!!
Anyway… Had a good start did those mighty Greys’s with the opening gambit of batting! ( who won the toss?) I was lost with my girlfriend Jane at the time after trying to follow a  fellow greysman jumping a red light who should know better… Naughty boy !!
Anyway Jane was a good omen as a, not been to cricket much and b, maybe I was trying to impress!
So it was a fantastic start with Biff an Jerry racking it up to such a rhapsody that ooh looks good… Enter QB to suggest change of umpire, on I come and do ones duty with scant knowledge of it all but if it pitches down leg somewhere! Anyhoo got a curve ball which looked hi an should of called no ball but got slightly confused as Biffs waist band is a bit on the mr Pickwick side and as the ball hit the stumps I on reflection got carried away to impress the girlfriend with my finger action and should of called my fellow umpire mr Partridge for he thought not out! Doh. Lessons learnt enter D Covil with fab style and panash had a great knock until I gave him LBW. (Not happy) oh well we were going great guns and on a roll with everyone but me batting with aplomb.
Tea fab with hosts being most kind to baby Jane etc.
On we trot and me an QB open the bowling aft 250ish village rules is a good knock…. Pressure on Balcombe ! (Again). I took a shine to the ball and whacked enough balls in to bamboozle the batsmen to gaining my 100th wicket after some fine catching from jerry (most notably) slow diving like Jason Statham.
Yes an all round good performance by yours truly cumulating with clean bowling the disco bails LED going mental after Terry predicted it was going to happen!( bit spooky)
Well it wasn’t all about me but a jolly good team effort….and Jane thought so too “How was the cricket ? You redeemed yourself well done .., was thinking how sexy you looked when rubbing the red ball against you 😛😛😛 xx 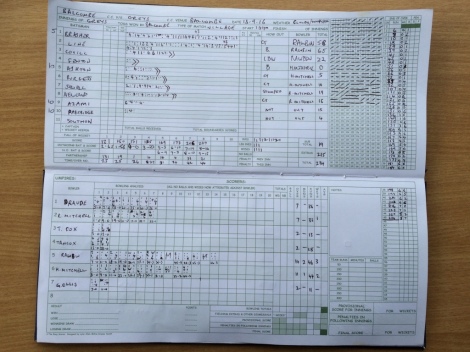 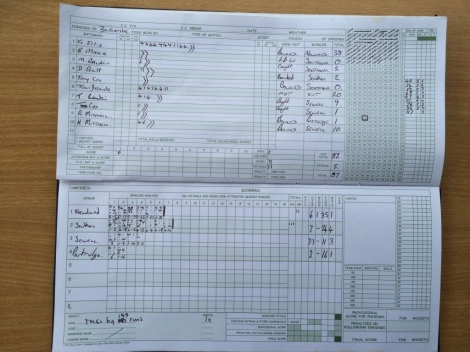 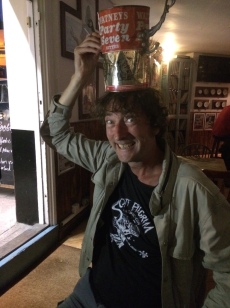 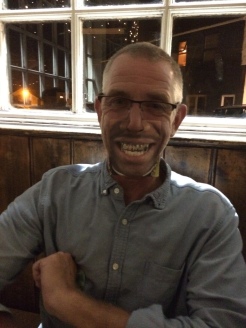 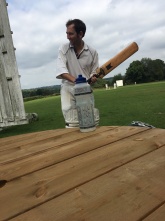 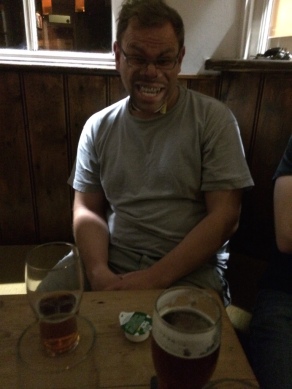