(Disclaimer: In reality this game was played in a good spirit. All contentious incidents have been warped beyond recognition to fit the Aggro theme)

T’was as fine an Autumnal September Sunday as any cricketer could wish for, and all was right with the world. Laid before the Mighty Greysmen was a timeless Sussex vista belonging to the ancient cricket club of Lindfield.  A light south easterly breeze wafted warm air up the grassy slope to the pavilion and The Mighty Greys had brought a strong team.

It was to be a 36/34 time game with draw possible, and the skipper won the toss and elected to bat.

Things ticked along fairly calmly to begin with, the odd bad ball being dispatched, until the 11th over when “Belligerent” Biffer Line was bowled for 11 playing a back foot swipe. It would be fair to say the Biffer was not best pleased with his own shot selection and the peace was disrupted for the first time as Biff retired to the changing room to collect his thoughts.

Del(inquent) Covill and Hatrick (Hater) Flynn batted nicely together with one of Hater Flynn’s sweeps up the hill being nominated in PSM dispatches. Haterick was caught behind for his habitual 32 (did he say 6th time this season?).

Dom(inator) Ashton came in and scored at his usual quick rate but it was with some frustration that his innings was curtailed on 13 when he was bowled.

Duncan (Disorderly) Edwards was bowled for 8 much to his annoyance, and once more declared cricket a stupid game.

Alex (Altercation) Fenton came in to face some Spiegelesque bowling from March and so it was time to deploy his trademark Dance & Dab technique; a cavalier charge down the wicket followed by a gentle push into a gap. Unfortunately while the first component was completed successfully, the second wasn’t, and Alex was half way down the wicket by the time the ball came through to the keeper who had removed the bails at his leisure.

Robbie “Robodeath” Hoare was promoted up the order and in an aggressive mood. He swung hard, ran at hamstring threatening pace between the wickets and smashed the ball up the hill with backfoot cover drives. A curious incident happened when Robodeath seemed to veer off course and collide with the oncoming Del(inquent) Covill. Could it be that Robodeath had been sent back in time to kill the antipodean? Or could it be that his stabilisation chip was malfunctioning? After all he did swing so violently at one pull shot that he pirouetted and landed on his shiny metal ass, much to the amusement of the watching Greysmen.

Meanwhile Del had been remorselessly piling on the runs as he has done whenever he has played this season. His innings contained the only 6 of the game, a bludgeon to cow corner. Finishes with a quite ridiculous season batting average of 112.25.

The Mighty Greys had amassed 188 runs which looked like a good total.

Tea was sandwiches, crisps and cake. The vegetarians were particularly narked by the lack of Cheese.

The wind direction had changed and the clouds had drawn in. Where these ominous and forbidding signs?

“Alarming” Alan Gallagher and Q(uarrelsome) Ben Newland both wanted to bowl down the hill so Zack “Scrapper” Dykes was promoted to open form the other end. The new opening pairing did a fine job with good control and pace. Scrapper Dykes was first to break the deadlock in the 6th over with a sumptuous cutter to bowl Brand, followed by dismissal of Tressider next ball. Alan joined the party next over, upsetting the top of Green’s off stump first ball. The score stood at 26 for 3 after the openers had completed their 5 over spells and the total already looked out of Lindfield’s reach, but could they hold on for the draw?

Q(uarrelsome)B relished the gravitational assistance afforded by the pavilion end and bowled with an extra yard of pace and good rhythm opening with a maiden before bowling opener Birch with a signature in swinging yorker.

Terry “The Shadowmaker” Burgess kept things tight at the other end with his 5 overs going for just 17. It was during this spell the Robodeath’s core programming appeared to kick in once more when he wanged a ball headward at Covill from point blank range. Only a wary attitude, lightning reflexes and extreme evasive manoeuvres kept the wicket keeper’s head unbonked.

Left handed Lindfield skipper Whear was providing more stubborn resistance with sound defensive technique necessitating a change of tactics to a fuller length outside off stump with swing taking the ball away. Eventually Whear was undone by a one-two of slower away swinger followed by a quicker ball swinging up the hill and removing his off stump, a moment later voted the Party Seveniest of the day. Quarrelsome B ended with figures of 5 overs, 2 maidens, 2 for 6.

The skip decided to bring on Alex “The Altercation” Fenton for some loopy bamboozlers, one so utterly unfathomable that both the batsman and wicket keeper Delinquent Covill missing a ball that can’t have exceeded high teens of miles per hour.

At the other end Robodeath Hoare seized another opportunity to line up Keeper Covill in his cross hairs when he was brought on to bowl up the hill. It was only the intervention to stumps and batsmen Cannon’s leg that prevented him from bagging his quarry. This LBDel incident proved to be the most contentious moment of the day. Robodeath let out a muted appeal perhaps disappointed that the ball hadn’t actually smashed Covill on the temple. The Lindfield ump thought long and hard about the decision before coming to the conclusion that there was no way for him to deny the appeal. Cannon showed himself to have a short fuse when after claiming that the umpire had been pressured into giving the decision, refused to leave the wicket for some time before eventually trudging back to the pavilion.

Robodeath’s excellent spell was capped off with a Delinquent stumping, leading to season’s best figures to 5 overs, 2 maidens 3 for 9.

Biffer Line and Dominator Ashton now had just 5 overs to take the final 2 wickets for victory, and the skipper duly bowled a corker swinging around March’s leg to hit middle stump.

Alas Newey and Jones showed good judgement and skill to block or leave the remaining deliveries and the TMGs fell one wicket short of victory despite an all-round high level performace. 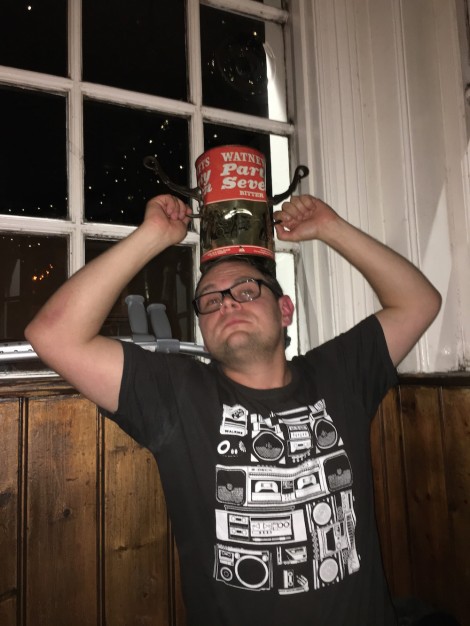 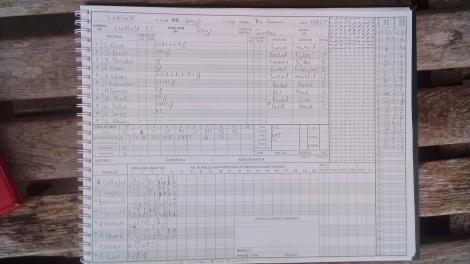 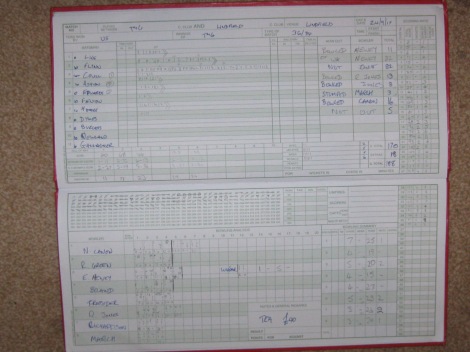 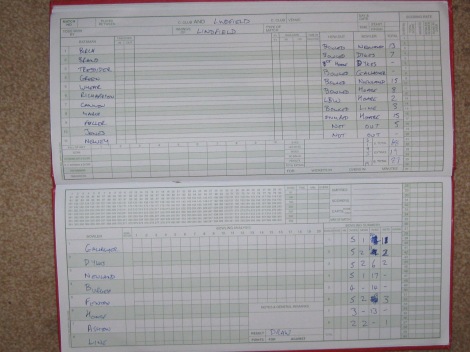 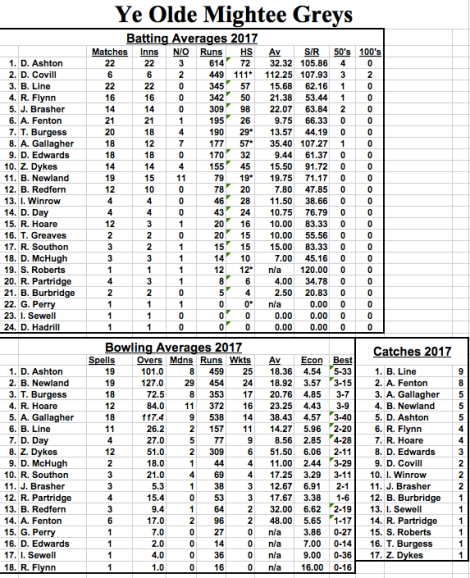 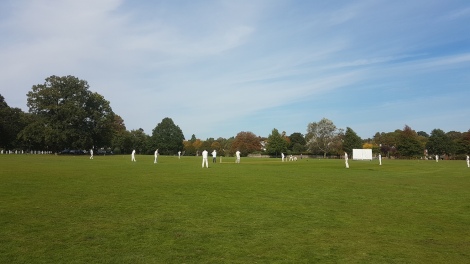 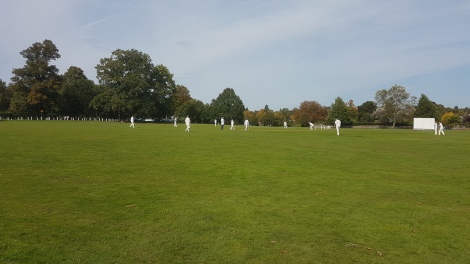 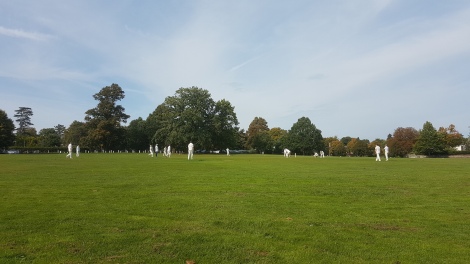 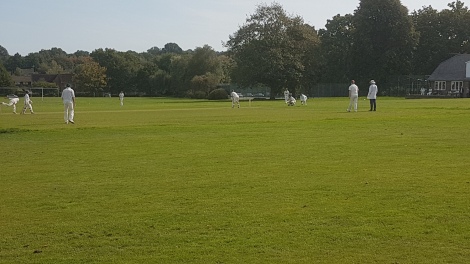 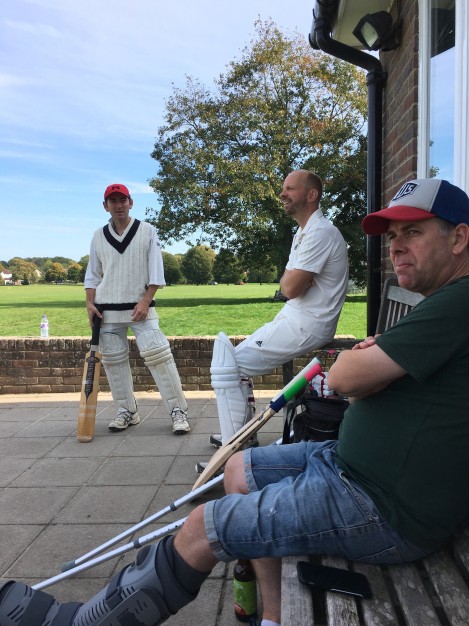