FRIDAY : The Internet is ablaze with the stirring call of democracy as TMG’S own Gina Miller’s demand a vote on the right to do something most other people don’t want to do .” What do we want , the right to stand in Horsdean for 2 hours waiting for the opposition to turn up ; when do we want it errr now I suppose ” .With their intrepid bid thwarted the game was again scheduled to start as near to 3:00 as possible , known colloquially as Bodle Street time.

SATURDAY : I tried to uninstall WhatsApp while reading Richie P’s witty and entertaining match report ( some of this match report may have a Trumpian relationship with the truth ).

SUNDAY : Cometh the hour , cometh the team; playing like a true team out playing the opposition in all departments the boys in white put in one of their best performances of the year. A hatrick from Kane, 2 from Stones and a beauty from Lingard ( PSM winner still no match report ) saw off a poor Panama. On a beautiful day we took to the field at Horsdean to play a slightly abbreviated village style game ( 2:15 hours for the team batting first , 55 minutes and 20 overs for the 2nd innings ). A tight opening spell by Dom ( 17-2) and Ben (33-2) kept the score in check with Dom in particular getting the odd ball to spit and seam off a length. The openers had reached 35 without loss when Dom found the edge , Jerry , behind the stumps, flung himself to his right to take a smart one handed catch low down ( a good proper cricket PSM ). Next ball was one of those you really don’t want 1st ball as a batsman on a length seaming in and hitting middle and off. Wickets then fell at regular intervals with Dimu (29-3), getting the dangerous left hander opener out plumb LBW.

A week on from a tour with no significant injuries ( Except , perhaps , the Cullompton sewage system; you know who you are ! ) Tel , bowling from the sea end decided the best way to deal with a ball being hit hard, and I mean proper hard , straight back at him was to stop it with his lower leg on the full. This was depending on your point of view a brave blocking of a certain 4 , a dropped catch or Tel’s ambitious attempt to run out the non striker by executing a rather painful Cruyff turn. Luckily no serious damage was done and Tel gingerly trudged off/ went at his usual pace with Alex completing the over. With good solid ground fielding B&H Crescent could never get a decent partnership going and with Hatrick (10-2) bowling with considerable zip , Biff tying up one end it was up to Al to bowl the 33rd and final over where he took 2 wickets in 2 (no) balls the first costing 2 runs as Zach exuberantly celebrated a fine catch at long on and the 2nd hitting leg stump to an attempted reverse sweep. This all meant TMG’S needed 132 to win on a tricky wicket.

In reply in a very un Greys like fashion  we never felt in much trouble . An excellent opening stand of 58 between Biff (44) and Hatrick (21) took the sting out of BHC.Some delightful cuts and leg clips from Biff were complimented by some lusty ( oh err missus ) blows from Hatrick culminating in him attempting to trademark his own shot now known as the “Danish” or the “Rind less”  ( a cut played with a pleasing on the eye ” lean back”). The middle order kept plugging away with Al(9) including 1 lovely 4 and Alex (2) getting out but Zach (20*) and Duncan (12*) saw us home with a load of overs remaining. Dunc , maybe , upset that Hatrick was trying to steal his thunder by trying to rival the Duncy Clunk managed to pull his hamstring although this may have something to do with him seeming to be wearing his Berlin Love Parade costume under his whites.
Beers were had in the late sunshine before returning to HQ; all in all football/cricket was the days winner. 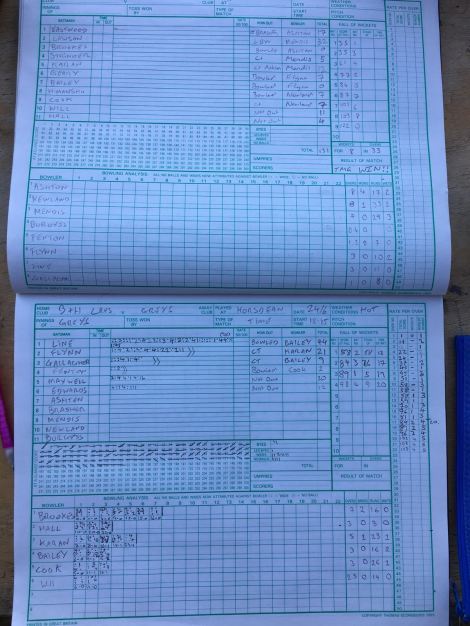 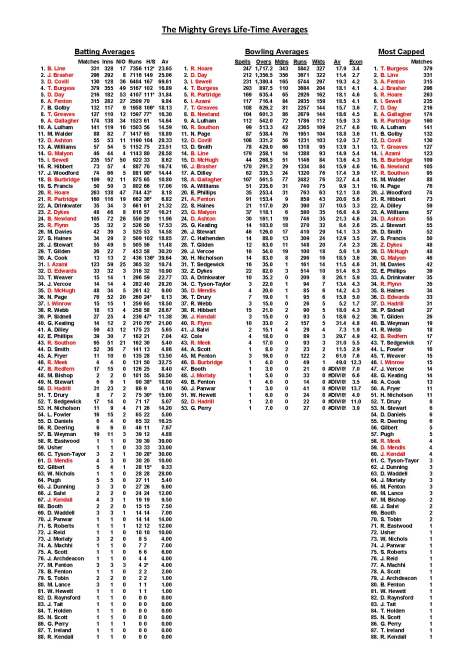