The Greys first game in Brighton since B&H Crescent last year was against new opponents , Cutter’s Choice, at Horsdean. With predictions from Alex’s Norwegian weather people of a hurricane monsoon , a fine spring day greeted the players. The Greys skipper called tails again (as it was their home game but they “don’t do tea”!?)and finally the sovereign landed that way up , the Greys were batting!

Whether he crossed a black cat’s path or he’s just a jammy git , Jerry got some early rubbish and Biff got all the good stuff. Or maybe Biff had had too much of the Marlboro Sauvignon Blanc at the test match the day before. Whatever , a regal opening stand of over a hundred ensued before Jerry was caught on 53.

This was followed by a collapse as batsmen from Delbert at 3 to the Kid at No.6 and beyond were dismissed cheaply. There was an echo of Shania Warne in the Ashes when the Shadow left one from Duncan that turned from the next track to bowl him. Unnoticed during this Biff joined the Greys senior service with a magnificent hook bringing up his 5000th run for the club , before falling for 69. The Choice kept at it to roll up the innings for 174.

The tea , provided by David ‘Kid’ Hadrill (and Chrissy), was absolutely super ,kings it was fit for! With all that on board Cutters had as much chance of chasing down the total as a camel has of winning the Derby and the Greys openers did early damage with Overlord claiming 3 for 5!

However Doug’s first ball boundary was obviously not the lucky strike it appeared to be as he did the same to the next two. More king size hits followed before Quiet Ben bowled him with his trademark in-ducker to Ricky’s great relief. With him gone and it getting cold and grim a dyslexic cry of JPS went up and the openers were brought back. Despite Rob spoiling the all bowled card with a nice c&b they couldn’t stub out the innings. With 50 odd needed off two Biff managed to drum up the courage to bring Alan on who smashed the stumps with his third ball to conclude the match.

Then it was back to the Embassy of the Greys Republic (aka the Constant) for a session gamely attended by several Cutters.

Holy Smoke! I think that got the butt of the joke in every sentence Tel. 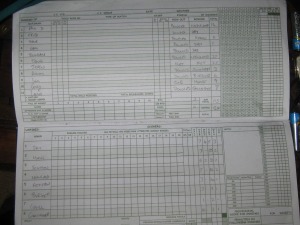