The land that time forgot.
Something odd happens as you pass through the Cuilfail tunnel. At one end you leave behind the cold encroaching sea fret rolling in from the sea, inner city Brighton with its grime and graffiti, speed cameras, rush hours and rows of fast food joints promising instant gratification.

Come out the other side and it’s another world. The sun is blazing down, steam trains still run from Uckfield to London. In the fields Sussex shepherds in smocks speak in Sussex dialect while handmaids harvest vegetables in trugs. Even the Bloomsbury set haven’t yet moved into Charleston.

We’re in another time and another place. No-one is in a rush and nothing happens quickly.

Rikki is sitting next to me in his wicker garden chair reading the Times, hair slicked down and parted in the middle, gazing at dense columns of text occasionally broken by a monoprint photo.  Looks like a dreadnought to my untrained eye . Alex is wearing a solar helmet and unpacking the hamper. We are all bathed in the afternoon sunshine, glasses of chilled cider in our hands, lush green grass under our toes. The salad days are here forever.

What’s  the time?, I ask Rikki, cheroot hanging from the corner of his mouth, straw boater perched on his head. He peers intently at his paper.

“It’s 1913” he answers cheerfully, after what seems like an age. ” Just found out about the Titanic. Dreadful show” he says.

“Anything else in there? “

“Papers are all full of Prussian sabre rattling towards the Belgians these days.  Grey says he won’t stand for it”.  Rumours of war everywhere, the end of an era looms.
“So what’s Gerry up to now then?”, I ask, quizzically
“He’s got an infected toe, Rikki replies, enigmatically.

I turn to David, casting a professional eye over the cows in the field as he tethers his Landau under an oak.

“What’s the time.is it old chap?” I enquire.  Slowly he removes his fob watch from his immaculately pressed waistcoat pocket.

I’ll try again. Biff?   “Mine’s stopped too. Rather rum if you ask me”, he says, pushing on the stopper of his beer bottle.

Yes, here in Bodle Street  time has stood still for at least 100 years.  Nothing ever changes.
From the road behind the hedge we hear the sound of an internal combustion engine backfiring. A huge vehicle pokes its way through the gate and begins to roll down the hill towards us.  As it disgorges itself it seems like everyone from the White Horse are on board – men, women, children, dogs, even a Dachshund, not yet the enemy of the people.    Thrown out of the pub at two, with little to do until it reopens at seven, the Bodle St locals have arrived in a charabanc!  It’s time for the Sunday picnic.

After a while one of them approaches us.  “City boys.  How about a game of cricket? “ he snarls “Or don’t you play with Oiks like us?
Cricket! What a good idea!  Ra ra! None of us had even thought of that!

“What about a timed game?”, he asks “No!, Biff says firmly with a genuine look of horror in his eyes. “We might still be here in 2013, especially if we break for drinks”.

There isn’t much daylight left so we agree to play 30 overs and before we know it Biff has tossed a Bun Penny, still in circulation, and we’re on our way to bat.

Looks like the whole village is here. That man over there who looks like he’s drunk most of the Harvey’s ever brewed – he must be the Blacksmith. And that chirpy one who bowls left handed – what does he do? Maybe he’s a poacher and that’s why they don’t talk to him!

Poor Derek, six weeks off the boat from Van Dieman’s land and he’s soon bowled, top of off, after some trademark drives along the ground.. A promising partnership between Biff and Terry ends when Biff his bowled off his pads, and Alex falls soon after with the score on 79.

But we don’t care. The sun is shining and this is the golden age of country house cricket. Bodyline hasn’t yet happened and no-one has yet heard of placing fielders on the leg side, even if that’s where all the runs are being scored.

Star bowler for Bodle St is little Tommy, coming in at full steam and swinging it off a length every time.

Alan, surely destined to be an officer in the coming war, comes to the crease when Terry, waiting patiently for a waist high ball on leg stump, lofts it high on the leg side and it crashes into the trees with pleasing clatter.

He falls for 47′ trying to lift a full toss over third man. Alan plays a couple of delightful cover drives before he, too, skies one.
Richard comes out and plays the Dave Day role perfectly, thrashing 21 off 15 before missing a straight one and that’s it. We’ve set Bodle Street 150 to win. Easily defendable, despite missing half of our opening attack.
There is nothing like a tea at Bodle St. In some places we are lucky if we get some curled up spam or dairylea sandwiches. At Bodle St we line up for three types of barbecued chicken,  a pressure cooker full of rice, a range of exotic fresh herbs and spices, all washed down by a tray of doughnuts. Even the Elderflower Cordial is homemade and delicious, served out of an old flagon bottle of scotch.
The Mighty Greys lick their plates clean and drink deeply of Somerset cider. Slumber descends as they sink into their chairs and soon all that can be heard is the sound of men snoring after Sunday high tea as the sun sinks lower in the sky.

We wake again as the charabanc returns from the White Horse down the road. Nothing happens quickly here, and there is still time for us to pop into Eastbourne for a quick shave and a shower before the Bodle St openers get their pads on and stroll into the middle.

The sea mist has caught us up, and the light is fading fast. It’s about to go off all over Europe.

Robbie, trotting in gently off 5 paces in the evening moonlight, finally gets his 250th wicket for the Mighty Greys, but soon after Colin and Martin start smacking the ball the boundary and Bodle St have 70 from the first 10 overs.

Time to see if the convict can nick us a few wickets and remove the threat of Martin.
“Bowl 6 balls at his stumps and I guarantee one of them will get him” Biff says and sure enough Martin is out 4th ball, bat pointing at the sky, middle stump on the ground.

A few more wickets, a run out and Bodle St are 8 down with 30 needed from six overs. No one says it but everyone is thinking it: “ no way are we ever going to lose to this lot”. The lazy day in the country is becoming a panic in the gathering gloom.

A couple of quick wickets for Biff, a hasty count back on the overs by the scorers, reading the scorebook by candlelight, and the equation is 8 runs to win off 6 balls. The stars are twinkling in the darkening sky and owls begin to hoot in the woods.

Little Tom, batting with the maturity of a 25 year old professional, pushes a quick single and brings Jake to the crease. Biff bowls a straight one at the stumps, you miss I hit. Jake lofts him high over Ibu’s head for six and scores are level, until a quick single brings a victory to the Street with one ball remaining. Wee Tom is beside himself with joy and so he should be. Bodle St’s first victory since the Crimean War.

A subdued Greys travel back to Brighton scarcely able to believe what’s happened.  How are we gonna tell Dave?

In the Garden of the pub (which has been renamed the Redundant Handpumps –a Harvey’s pub in name only) Ian surprises us all by turning up with a fully lit 21st birthday cake for Ibu, with subbuteo fielders arranged on top according to the Rikki Southon School of Fielding, and for a moment, the salad days are back again. 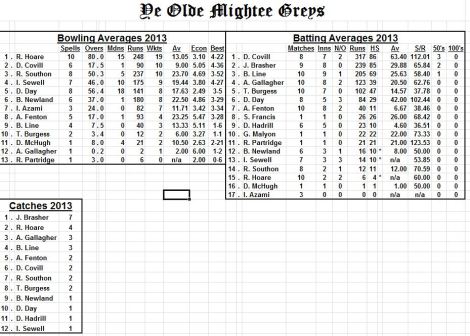