The game at Warninglid approached with mixed feelings for those of us who take any notice of the emails from that hard working Professor of bat grips, bicycle frames and  sciency stuff. It was not to be that the newly christened “Warning-lid”, the white cowboy hat of shame, would be worn by Alan during the game, as he had managed to compile a match report in the nick of time and thus avoided having to wear it on top of his batting helmet. On the plus side, we were going to the  publiest (I’m very pleased with this new word) ground on our current schedule, and always settle in for a pint before the game in the pub garden, which is how it should be at every ground. The Greys future youth policy were also there in the shape of James Hoare and Albie Day.

The square looking much better than expected and the pitch an almost straw colour. A less experienced reader of a pitch may have been fooled, but Skip perceived it was only a thin crust (insert your own pizza joke here) on top of the wicket and underneath was full of snakes and other devilish demons. He put the ‘Lid in, confident carnage was about to ensue.

Rob opened from the pub end, initially deciding  not to bother with the pitch at all and bowled full tosses for the first two balls. These were both smacked gratefully to the square leg boundary by one of the youngsters opening for Warninglid, and with a little bit of swearing, Rob changed his policy, and had a go at making the ball bounce. Some order was restored with some great deliveries. James had already stopped watching, unfortunately. In his next over, a  rethink, apparently, because we were back to the full bungers,  with the unsurprisingly same result from the same batsman. The opposition were suddenly 16 for none off two and a bit overs, with Biff at a loss as to where to put the field. “I can’t decide whether my bowlers are brilliant or crap,” he said to no one in particular as someone was dispatched to the leg side boundary. However, Robbie finally decided bouncing the ball really was the way to go after all, started the bowlers’ mission to make the field positions utterly irrelevant, by bowling the opener and number three in consecutive balls. The second of these, apparently unable to quite take in what had just happened, lingered at the crease for an unseemly amount of time. We later found out this was his first game for Warn, as we call them, and he obviously felt he needed to make it look like this was not what normally happened when he batted.

Meanwhile, at the other end, Dave was picking his way down the slope to great effect. I think I remember, because he only mentioned it 30 or 40 times in the pub afterwards, that Dave got 4 wickets in the game last week, and bowled what may have been an even better spell here. Swinging in and seaming/cutting away, he bowled 5 overs, 4 maidens, 2 for 6, possibly with only two scoring shots. One of his wickets took PSM, a snorter of a ball, which I could see changed direction off the pitch from where I was standing at point. Robbie removed a further two Lidders, and their innings was unraveling alarmingly, as a series of batsmen were either befuddled by the pitch or sealed there own fate with wild swishes of the bat. 6 batsmen were back in the pavilion, all bowled, when Ricky and Ian came on to bowl. A little resistance came from the solidly built Church, with some mighty blows, but he couldn’t stand up to the dissolution wrought on him by Ricky, who trapped him LBW, unfortunately not demolishing his stumps, which would have worked much better for the tenuous extended metaphor I’m trying here. It proved the only dismissal not bowled in the innings, as Ricky cleverly came round the wicket and told us later he’d used the shiny ball, presumably dazzling the batsman into surrendering his wicket. Between them, Ricky with 3 for 15 and Ian bowling tidily at the top end with 1 for 22 finished off the resistance. The pitch had behaved as expected after all and Warninglid were licking their wounds with a insufficient 58 all out. 9 bowled, 1 LBW. One for the statisticians there.

Straight round it was, as tea wasn’t ready and it was too early for tea anyway. We may be many things, but we’re not savages you know- can’t have tea before 4pm, any Englishman knows that, old boy. It seemed to make much more sense to go out and smash a cricket ball all over the park, as Biff, Jerry and then Guy set about the Warns bowling. The younger Lidders hadn’t learnt much from their own innings, tried bowling fast and short, much to everyone’s delight, and despite Biff generously guiding the ball into slips hands having scored a quick fire 22, we knocked off the runs in the 8th over, the winning total including 7 fours and 3 sixes. Guy 20 and Jerry 15 not out, and tea just delayed enough for decency to prevail. I’m wondering if we should be warning the opposition in future about the power of Guy’s hitting, as he is now striking the ball really hard along the ground and not just in the air like he used to.

As usual tea was a good one, which defeated even Ian with quantity, and was followed by a beer match, which was only notable for another off side four by Terry, and the fact that myself, Ben, Alan all get a mention for doing something on the day. Apologies to those people (apart from me, because I refuse to apologise to myself), but A. It was only a beer match and B. I’m not writing two match reports.

Back to the pub it was , where it emerged we were all invited to Wig/new Ian’s 50th birthday bash. Looking forward to him winning PSM in a future game and showing us how match reports are supposed to be written (probably amongst other things in the car on the way back from the game).

Another victory for the Greys, one of our most convincing I would imagine, apart from the game that shall not be named, because it still gets Biff’s hackles up. Find out next week if we can make it 3 in a row at Twineham, Wine ’em and Dine’em.

and the Warning Lid… 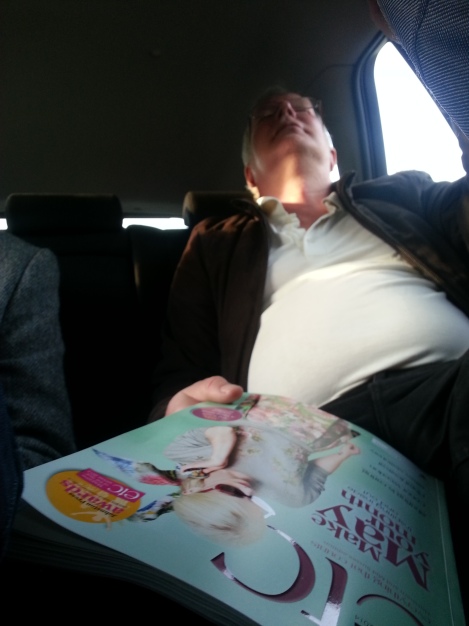 5 responses to “TMGs vs Warninglid by Alex Fenton May 2014”