Destination Twineham, weather suspect, pitch plastic. Not words to inspire those amongst us eagerly longing for a day’s riveting cricket… 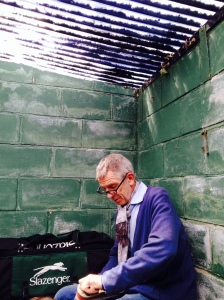 Wet and windy The Mighty Greys arrived at a blowy, but dry, Twineham. After inspecting the pitch, yes it was still there, Biff lost the toss and we were given the dubious honour of batting first.

Twineham represents the closest we get to what we practise on during the winter, flat and true with a bit of bounce, but not much else for the bowlers, especially those of a certain age who struggle to reach the other end of the strip let alone bowl with pace and venom.

With that in mind expectations of a high scoring game were, well, high, and it looked like we were not going to be disappointed. With Jerry off gallivanting Del was back into the fold for the first time this season and was straight up the order to opener, with Skip at his customary number 2. They set off at a fair clip punishing the loose balls although there was a noticeable dearth of boundaries due in no small part to the heavy outfield, but also due to the general lack of butchness of both openers.

It was in the 12th over, with the score 1 shy of the half century, that Del, showed a degree of ring rustiness, by missing a straight one that he was attempting to force through leg side and was bowled for 25.

Biff was joined at the crease by Guy, together they saw off the Twineham opening pair. The bowling change brought 2 wildly different bowlers into the attack, from one end Steinke a wily character, who bowls a heavy ball on a nagging line, from the other end was Chatfield who didn’t and bowled with little rhythm and varying line and length, predictably at the end of their combined spell the latter had taken 4 wickets and the former 1, those wickets fell and follows:

QB came out, but Biff sashaying down the wicket was stumped off the bowling of Trollope for 45. With the score at 110 Eo was next up and for a while it looked like the tail might wag but QB departed for 7 with the score on 123. The Greys’ 10 & 11, Robbie and Ricky, managed to conspire to give the bowler, Bunn, a hat-trick, all out.

Oh dear, 123, on a flat, true wicket, really didn’t look like enough and would require some very good bowling if the peoples favourites were to get anything out of this game.

A quick aside on the tea, which was dominated by a brace of cakes so formidable that even Eo was a little askance, wow good but heavy and sooo black.

Waddling slightly your mild mannered janitors shambled out to the middle to defend the paltry total. First up for your salty sea-dogs was DD, with his extra zip he could get a little out of the pitch and looked like he could be a bit of a handful, the batsmen Trollope (right-hand), and Hunter (left-hand) looked to have different game plans Trollope looking more circumspect, whilst Hunter looked to hit anything that was either short(ish) or up there. DD had Trollope in a little trouble, and Hunter playing and missing at shorter wider deliveries. At the other end Robbie struggling into the wind, with a wooden leg and unfamiliar shoes, bowled like a tart, particularly to Hunter who smashed anything on his pads to the boundary, like a real man. Things got a little better for Rob as he came to terms with the conditions but was banished to the deep after 6 over the went for 26, DD came off after 7 doing a little better going for 20, but uncharacteristically the Greys openers had failed to make a break-through.

Swingers Eo & QB, should’ve been the right men for the job as they work their magic in the air, but magic was in short supply as they went for a combined 55 of 5 overs, it was during the bludgeoning of Eo that Rob revealed a long shrouded phobia of trees, apparently. Hunter carted a long hop towards the point boundary where Rob heroically hurtled around the boundary without a thought for his own safety it was only upon losing the ball in the low evening sun that he had to take appropriate self-preserving action hurling himself manfully away from the ball, to the massed derision of all present, bastards. PSM.

Hunter passed 50, and your pin-up boys had still yet to get a wicket and things looked dicey, Alan having batted in at a bowlers slot was thrown the ball, and did ok, these days he’s bowling with control, and is starting to look like a real alternative. Ricky came on at the other end and went for 11 off his first and last over, Alan got 3 more balls before Twineham knocked off the required runs in 20 and a half overs, without losing a wicket, the discerning ladies objects of lust had been utterly spanked, beaten by 10 wickets. Crock of shite. 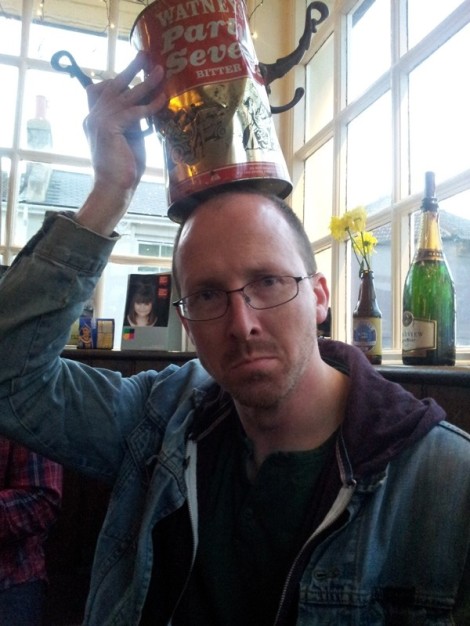 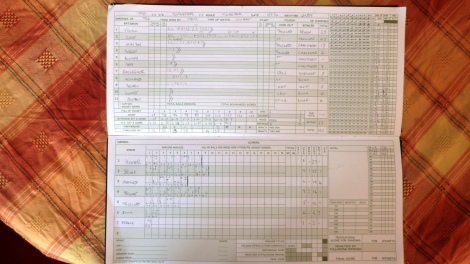 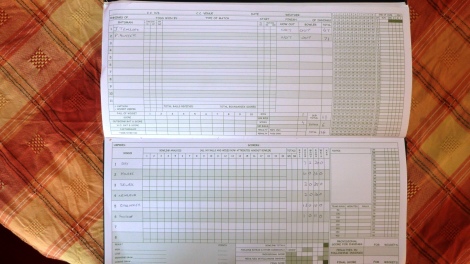 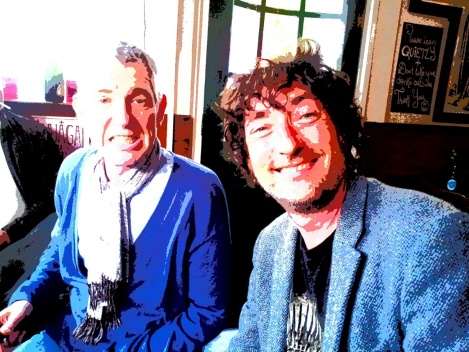 and then some pics from the pub afterwards… 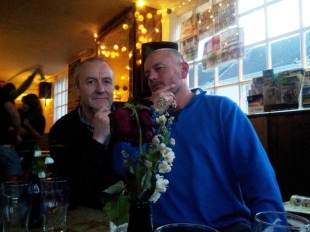