When my Dad first asked if I wanted to play on Sunday i was a bit shy so I ignored his text. He got a bit mad and shouted at me and called me names and made me play. Dad always says his cricket mates are really nice and a laugh and not vain, self-regarding loudmouths at all. I really respect my dad, even though i can now see the frightened little man inside.  So i fort i’d go along if it would stop him going on about” knowing your history” and his “legacy” and all that weird stuff!. I didn’t tell him about my interview at Gucci. He would have just started shouting again and I didn’t want another Chinese Burn.

In the pub it was good. Dad bought me a Harveys. He knows I like lager but it’s well long listneing to all them real ale-heads chattin’ shit. Anyway, “What ya sayin?, bruv!” I introduced myself to the well-old white-haired one. He looked at me funny and went out for a roly. I don’t think he was being unfriendly because he kept coming over to me all afternoon and sharing my tobacco with me.

I didn’t recognise all of the team, but at least the creepy one who used to put his hand on my leg when i was eight weren’t there.

The match started, with no time for me to practice any bowling – or the others by the look of it. The one with a shredded wheat on his head and the nice one who makes his own sound-systems – Wicked!, were bowling some dodgy stuff and getting hit. The grass was long and slippy but the ball was flying about, giving our men no chance. Well, … one! Dad says that Albie’s Dad is a sociopath and we have to feel sorry for him.

One funny thing happened though, when my Dad lobbed the ball back to the small one with lezzer hair, who weren’t watching, it bounced right on the middle of his head and he fell over crying. Well comic! – but no-one takes much notice of the one with lezzer hair.

The other team scored lots of runs, maybe 74, when the white-haired one, Word!, runnin’ sideways and back, jumped and stretched, both feet off the ground, and caught the ball.! Banging! It should be on YouTube with the parakeet dancing to Queen.

“Maybe this wasn’t going to be so embarrassing after all,” I fort, “Oh!” My dad was coming on to bowl!  Our other men were getting some tonk and they’re nowhere near as old as him. Mum says they only let Dad play because they felt sorry for him when he was in hospital. Anyway, he scuffled up like he used to on the beach at holidays and banana-bowled out their midget-man number 3, second ball. Third ball, he bamboozled their next old man- LB. The next kiddie blocked one before another banana-ball got him LB as well.  There was my Dad, relaxed and smiling, surrounded by back-slapping well-wishers. I hardly recognised the git-faced misery. The one with the purple patch said that it was a three wicket maiden that changed the game! ( Dad says to call him Alex, because I wouldn’t like it if he got upset.)

After that the other team got out quite often. The one with the motorbike was bowling and their bloke hit it hard. I did a dive and caught the ball. Everybody said it was a brilliant catch – even my dad, who was sniffing and rubbing his eyes for some reason. Later on, everybody agreed my catch was the best so i got to put the special trophy on my head and i have to write a Mach Report.

My Dad carried on doing his bowling for ages and got two more out – one bowled and another LB. He even got a run out too!, a underarm diving throw, back to the wickie’s end. I’ve never seen him so pleased with himself.  Not the usual self-pitying nause, as Albie’s Dad put it.

They had one batsman what our team couldn’t get out. Dad said it was because he didn’t do any stupid shots. He got over 100 runs so everybody had to clap for him. After 40 overs, Lindfield had got 196 runs. The last two men survived for 12 overs and made something like 60, even though me, and the old white-haired one, and the Alex one tried to tempt them into a skier.

After sandwiches we was in bat. The fat bossy one was wearing a shiny purple helmet which made Dad and his mates laugh. Aren’t grown-ups pathetic? The lezzer hair one was doing relly well. He was getting fours all over. Dad said he could swear the ball was going where he meant it to. “By-sekting the fielders” he called it.

The purple-helmet one was huffing and puffing, though, and getting stresst and tried to hit over mid-on but was caught. He got 16 and Dad said they’d done a good start (18 overs at 4 an over).  Our new batter had a head like a bomb, but my dad said to watch him go! I did. He tried to smash their leg-spinner and missed it and it bowled him.  In came Albie’s Dad who said he was injured for bowling but ok for batting. I remember bullies like him from school. To be fair though, he looked like he meant business.

The lezzer one looked knackered to me but was still hitting fours over the bowlers head. Dad said he had been “crushed by the general indifference” to his 50, and was never going to get 100

Our men kept getting runs, usually about five or six an over and while the sun droned and the scorers quietly argued, I helped Cara Delevingne from her Moriarty designer keks…..

“Here we go!” I was rudely awoke by the next six batters rushing about to find their stuff cos the lezzer had gone and hit the ball to fielder for once.

“Right up your street, then Tel!”, said Dad to the old white-haired one, in a snide way. We needed six off each over but he kept missing the ball. (Dad says the score book doesn’t support that.) The other team brung on a fast bowler and TOWH one was bowled. ‘Alex’ was next in and got a four first ball but then was out trying to go large! The nice one, what makes wicked sound systems, came in and did really good, scoring 11 off nine balls. Him and Albie’s Dad looked like they was going to finish it, taking cheeky runs and that. Dad said to not bother getting pads on but then Albie’s dad got run out with the score at 188 with three overs left. Shredded wheat-head was next in bat and he looked proper. There was some byes and a four from SWH but our score seemed to leap to 196.

My Dad’s skin went all grey and he told me to “get some fucking pads on”. TNOWMWSS had got bowled with five balls to go. I rekon he enjoyed the situation, needing to score one to win the game. Albie’s Dad said that he “stepped into it” but it looked like a spawny edge to me.

I had a nice time but my legs are killing me. It was the first exercise i’ve done in three years.

Dad, will this do? 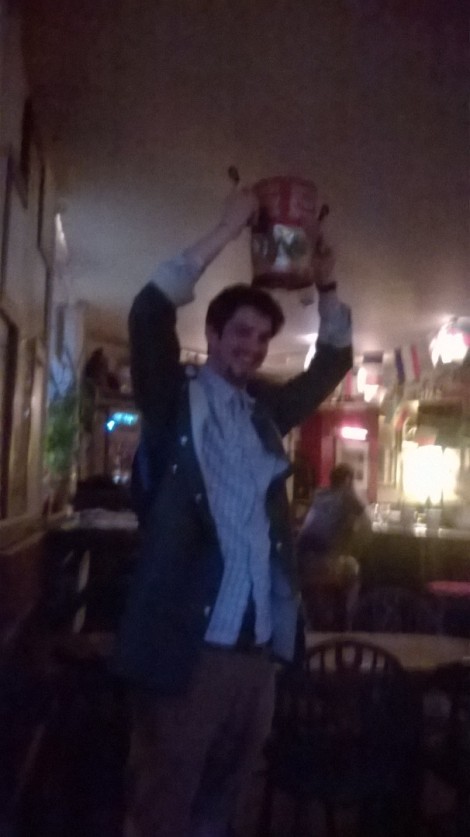 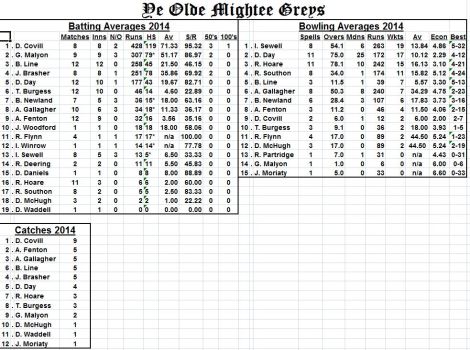 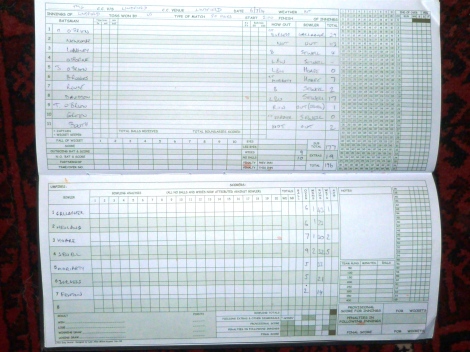 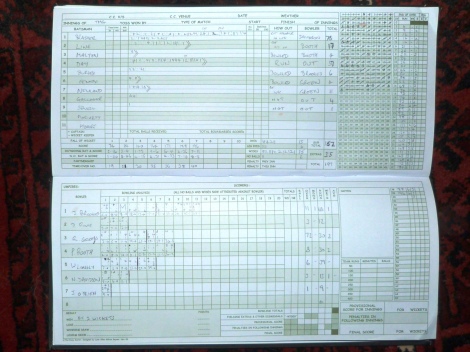