What usually happens is that we start the season well – everyone is available, Robbie and Rikki have had a winter to rest up their multiple tweaks and groans – Rikki with his very personal form of two-person physiotherapy – and we win a lot of games before and after the tour until August comes and people go off on holiday or Festivals with Beasts and stuff and Biff spends all week trying to find the eleventh man and we lose one or two we shouldn’t. But then everyone returns from beaches and fields and with a full cast we finish with a flourish, Mighty Greys style.

But that didn’t happen this year.  The weekly search for the eleventh man became a search for the tenth man as well, and we got into a bad losing habit right up to the last game of the year: Balcombe.

The name Balcombe puts fear and trepidation into the heart of any true Greysman.  Fear because it marks the last day of the season with only the horror of winter and endless snowbound days in January to come.  Trepidation because Balcombe  have a six foot nine giant called Mitchell who swings his four feet long levers at everything, and today we are missing Guy, DD, Delbert and Rikki and a host of others. Knowing this, we found time to have an extra pint in the Constant to steel ourselves for the long journey into Frackland and still get there in time for a few more from cans and bottles.

We’re playing Village Rules and they’ve got a posh new scoreboard that shows the batsman’s score in bright lights as he accumulates it.  As ever, Robbie and the Wall bowl well. Robbie arcs one across Mr Smith at pace and it takes an outside edge, slides across Jerry and is stupendously caught by the high outstretched right hand of Joggi Panwar at first slip.

“That’s got PSM written all over it!” I rush up and tell Joggi.

Quick as a flash – quicker than he caught it – he replies.

“But if I do, there’s no way I’m writing the Match Report.  You can do it old man.  Keep you busy during the long nights when the clocks go back”.

Next ball Robbie dismisses Mr Tata, caught behind by Jerry this time.  Cheerio to Tata can only mean one thing.  We all looked up to the skies to see Mr Mitchell sliding down his beanstalk.

“Fee fo fi fum!  I see the ball going aerially to all parts of the ground!” he shouted as he took his guard.

Robbie bowls on a good length but the outstretched arms of the eight foot six giant are long enough to hit the ball before it’s a yard out of his hand. No hatrick for Robbie.

And so it was that QB and Joggi got a frightful tonking from the seven foot three giant, but he was also dropped a few times, by Robbie (who had taken refuge in a hedge, with only his nose poking out) and, uncharacteristically, Biff at Long On. To add insult to injury, Biff brought himself on to bowl and got the same treatment as the others. Even though Jerry eventually managed to stump Mr Nine Foot Six,  Balcombe decided to declare on 203 for 3 with time still on the clock, the cheeky monkeys.

We wolfed down tea so that we could get some more beer in.

Biff fell early in the run chase.  Jerry, knowing that it was possible to catch Delbert for the Batting Trophy, fell on 20.  Alex and me managed to keep up with the rate until I played across a straight one and ran off the pitch and into the woods to hibernate until Spring.

Alex and Rob the Cabbie batted well – Rob looking increasingly confident at the crease, moving his feet, timing  and placing his shots and rocketing a few to the boundary.  Alex ,showing us his new circumspect self (I haven’t just said something rude here DD), came up with a couple of sparklers. Then Robbie twatted one to backward square leg and Alex missed a straight one and we were in big trouble.  Things were starting to look desperate, although we still had a few people who could bat still in the hutch.

As we all know, we can take the despair, it’s the hope we can’t handle.  Hatrick burned brightly but briefly like a Roman Candle, EO went off without a flare, Joggi threw in a couple of firecrackers and Alan and Rob fizzed like Catherine Wheels nailed too tightly to the wall.  With acres of time and overs remaining, we were all out for 158, still 45 short of the target.

Out, not with a bang but a whimper.  The season is over and we’ve just lost eight of the last nine.  Someone had poured Harveys all over our fireworks. “No way”, I thought “will you catch me nominating Biff for Greysman of the Year with a record like that.  And even if I did, he couldn’t possibly win”.

Soon after, a man in a cravat came into out changing room and said “Whenever we humiliate a team, we always like to force them to drink Port to rub it in a bit more” before whipping a bottle of Old Tawny out from behind his back and tossing it into my kitbag.  Having had humble pie for tea, we gladly swigged a mouthful of sour grapes before more beer from the bar.

Back at the Brighton boozer, the vanquished Greys were soon joined by Greysmen occasional and regular for the end of season session.  In fact, we probably had our best post-match turn out of the year (I still haven’t Dave).  We might struggle to get a full team out onto the pitch but we can always get a full house in the pub. We’re not called the Mighty Greys for nothing.

Thinking about my next Greys role as Chairman, the moral compost weighing heavily on my shoulders, I found myself asking my new rhetorical question on the way home. “Have we”, I wondered, “become a Drinking Club with a Cricket Problem?”

Is it time we joined Cricketers Anonymous?

Answers on a beer mat please. 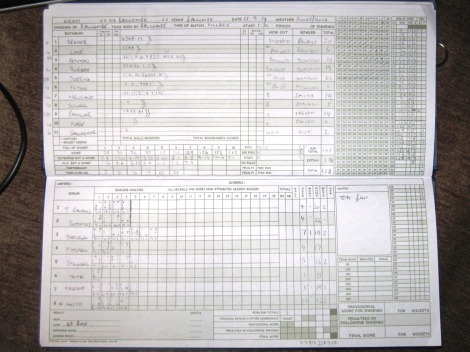 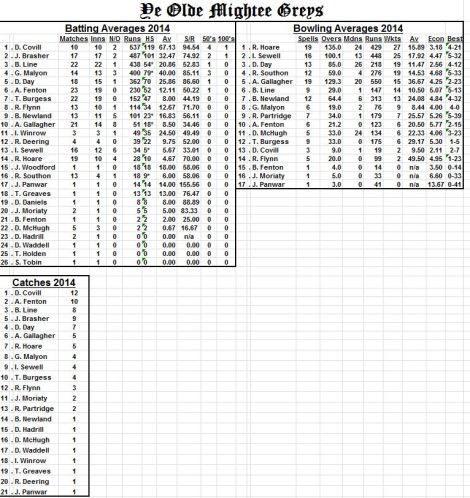