Another week another captain, this time it was the turn of Alan “Er…..I suppose I could do it” Gallagher, thrust into the limelight through a general  apathy amongst the rest of the team, and a surprise resignation of the previous and brief incumbent Robbie “Hammy” Hoare. (Tales from the Riverbank match report, anyone? Maybe not.)

There was a new Greysman in our midst, Dom, who had been labouring under the illusions that being a DJ is a proper job, and being up till 3am somehow precludes playing cricket the following day, but had seen the errors of his ways and decided to join his friend Zac in the Greys fold, becoming a second Greysman from the previously unexplored county of Lincolnshire. Unmanned drones have recently flown over this remote region of the British Isles and discovered that it is mostly made of potatoes.

Team assembled, we made arrangements for the journey to distant Bodle Street, land of mysterious drunken wealth and dogs. Having missed this fixture last year, we weren’t too sure about the quality of opposition to expect. Two years previously we had been beaten by a team of slightly higher standard than we were used to here, led in large part by an eleven year old boy with the cricketing brain of Mike Brearley. Luckily for us, he is now playing for Sussex, and the Bodle Street team had an unfamiliar look about it. Most notable change was the absence of Martin, who had apparently caught sight of himself in a mirror looking a bit funny and beat himself up, and hadn’t played in these parts for over a year.

The other thing which made the men of Bodle look different from usual was that they weren’t actually a team at all, as there were only 7 of them, and TMG, who’s confidence has taken something of a battering in recent weeks, began to think there might actually be a chance of victory. We may have to travel 30 miles to find a group of 7 men and boys who are bad enough for us to beat, but we have even less shame than cricketing ability, and happily batted first, in the somewhat unusual situation of having nearly  as many players on the pitch as the opposition. Two each of  batsmen, umpires and spare fielders, stretching our resources to the limit.

This may have caused a problem if early wickets had fallen as has been the new batting strategy for TMG, but it was not to be. Bodle Street openers were both young and with a bit of pace, but despite bounce varying between “Yikes!” and, “You’re joking, aren’t you?” Jerry and Wig kept out the odd good’un and punished the increasingly frequent bad ones to race to 50, despite the attentions of spare fielder Burgess, who was showing a degree of sprightliness at backward point which he hasn’t ever displayed when playing for us. His enthusiasm almost cost Jerry his wicket, when calling a quick single, Terry came very close to running him out with one of those languid throws he does that are travelling faster than you think. Direct hit, but Jerry just made his ground. Anyway, piss off Burgess, there’s only room for one Jonty in this team.

Unfortunately, Jerry found someone from Bodle Street at deepish backward square leg, dressed in something other than whites, who juggled, but caught the ball, and he was out for 30, with the score on an unprecedented, for this season, 81. Wig carried on, playing a couple of lovely drives along the way, and joined by Guy, the runs continued to flow. One of the Bodle Street spectators was eventually persuaded to get off his arse, stop drinking the beer, and relieve poor Ibu of having to field all match for both teams while unable to eat or drink.

Guy smacked a couple of big 6s, and Wig was out for an excellent 48. Zac came in managed not to pull his thigh muscle when setting off for a quick single, and was out after making 13. Alex injected his usual frenzied approach to running between the wickets, this time in an effort to get Guy his fifty, but he fell one short on 49. and we finished on 177 for 4 off 30 overs. Ok, Alex was involved in another run out.

Thai curry had made a return, and much chicken was consumed, although we had decided to switch to beer rather than the usual Barrel of Sheppy’s cider. Probably just as well, as there is a distinct possibility the popularity of this fixture with some of the younger locals is more the prospect of some free booze than a love of cricket.

It seemed in the spirit of the fixture to spurn the usual fielding drill, and so we made our way on to the field and waited to see what our bowlers would make of the Bodle Street batting line up on this tricky pitch. Short work was the answer. Skipper Alan set a ring of steel field, which was more or less irrelevant, as it turned out. He took two wickets in his first over, one caught behind by Alex for PSM, a one handed catch off one that climbed off a length and brushed the batsman’s glove, and the other clean bowled to a batsman who clearly didn’t fancy anything that quick. Alan bowled well again for his two wickets, and he generously took himself off to give Richard a bowl.

The story at the other end was a bit different, where we were treated to a display from a 30 year old Newbery bat, of extraordinary power, according to its owner, who had been waxing lyrical over it at tea. And no, Dave, that’s not a euphemism. Three or four balls went sailing unceremoniously back over Robbie’s head, before he got his revenge with one that caught the top edge, and with Zac under the ball, it was a good bet it would be caught, although this time he put himself in the right position for a change, rather than performing a strange contortion at the last minute.

Rob finished his two overs with 2 wickets for a few, and was replaced by Ibu, who bowled nicely after a slightly shaky start, bowling a beauty which just dislodged the bail on the off side (the off bail? Need guidance on that one, if anyone knows). 32 off the 4 overs from Rob and Ibu, but the coup de gras was delivered by Richard Partridge, who quickly worked out that bowling at the stumps was the order of the day. He proceeded to get a caught and bowled with his first ball, and then, with the exception of a solitary boundary, removed another four Bodlers for no runs, three of them bowled middle stump. The scorebook does not reveal the fact the several of these may never have actually picked up a bat before, as Bodle Street suddenly had eleven men, but you can only bowl at what your given….or something, and he did, but only for two overs, finishing with figures of, if you hadn’t worked it out for yourself, 5 for 4. 41 all out off 9 overs. 7 of those for only two scoring shots off Alan “Wonderwall” Gallagher, and Richard “I don’t tour because I’ve done it before” Partridge (could put anything in there really, because he never reads these reports anyway). And doesn’t seem to have noticed we are not in tents anymore.

So having not started until about 3.00pm, we were all done by 7.00pm, and back to the Constant for a welcome sight of Hatrick, and his amazing knee. Bloody poor show on the drinking, much to Hatrick’s deserved disappointment, as a steady stream flowed from the pub on various pretexts, like, “I know I’ve got an electric car, but it doesn’t drive itself,” and, “These ants don’t study themselves, you know.” Only two Greysmen stayed until they’d had too many, and neither of those for the duration. No way to celebrate such a stunning victory. 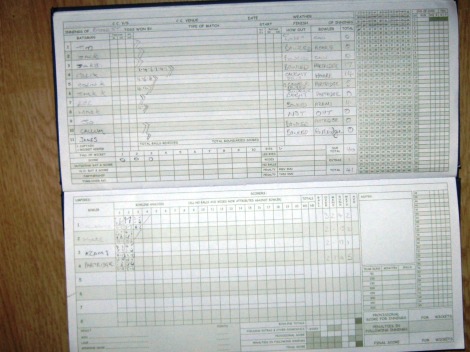 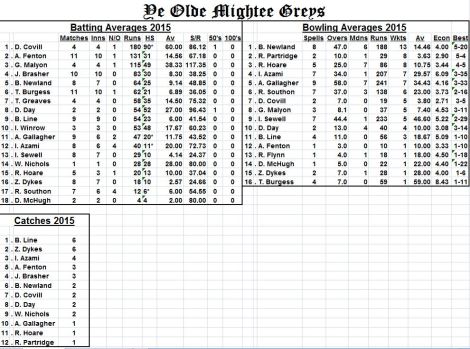