The Mighty Greys took the field at Denton, near Newhaven, with Alan and Robbie, our new opening pair, bowling well but wicketlessly on a damp but drying wicket. Wearing his Glastonbury suntan, and laden down by thick packets of tobacco, D.J. Ricki Rummidge took the first wicket, caught behind by Alex after Turner had attempted to swing a rising ball over his shoulder. Halsey followed in similar fashion to QB, but at the other end Denton’s Guy kept hammering the Grey’s attack to all parts, including through the fence and into the river at the Factory End. Ibu, bowling with flight and guile, helped himself to three wickets (two in two balls) and Zac (first ball) and your correspondent took one each, both bowled. But we could do nothing to dislodge Mr Guy at the other end and he carried his bat through 35 overs for a well-made 115, nearly 70% of his team’s total of 169. The run rate for the chase was locked in at 4.8.

The Mighty Greys have only managed one successful run chase all season, the first game at Hartfield when Delbert made 90. Without our ever dependable Aussie, or Jerry, Guy and even DD coming late up the order, confidence in chasing the target wasn’t high.

Biff and makeshift opener Alex batted carefully for the first few overs until Alex was caught out on 13. Joined by the Mighty Shadow, Biff cautiously batted himself back into form and, shaking off his antipodean jetlag, began to find the boundary in between trademark lightning singles and twos with the Shadow. Their fifty partnership came by the 19th over, and ten overs later they reached their century partnership, ably supported by the ever dependable Mr Extras (35). With five overs remaining, the equation was clear: 31 runs with 9 wickets remaining. With a padded up Tim pacing around by the pavilion like a caged tiger, we should piss this.

But we didn’t. Biff was out in the 32nd for a grafting 55, playing back and missing to Scottish Dave’s wrist spin. A few balls later the same bowler beat Tiger Tim’s flailing bat, and by the start of the 35th we needed 10 to win. Having reached his first 50 for over a year, the Shadow top edged the first ball to the safe hands of Keeper Poulton, and neither Alan or QB could the boundaries needed from the next five. We lost by a frustrating 5 runs. Bollocks.

So why am I writing this? It isn’t for my totally unexpected extra cover boundary that crashed into fence early on in my innings. Nor is it for my one-bounce four through midwicket off Scottish Dave, when we need boundaries to keep the rate up. Oh no.

Running, Usain Bolt-like, yet another two with Biff, I sprinted back to the non-strikers end as the ball came in from the rope. “Your end!” ( a call that so confused Woytek, Paul Sidnell’s Polish brother in law when he played all those years ago), Biff cried, milliseconds before the ball crashed into the back of my helmet, maybe three inches away from the same point where Philip Hughes has his artery fatally split. It made a resounding “Doink” or “Doing” (there was much debate about which afterwards) which could be heard at Paradise Park and over on the ferry harbour. And this, fellow Greysman, was the unanimous choice of my team mates as their favourite moment of the day.

Doncha just wish you’d been there to witness it? 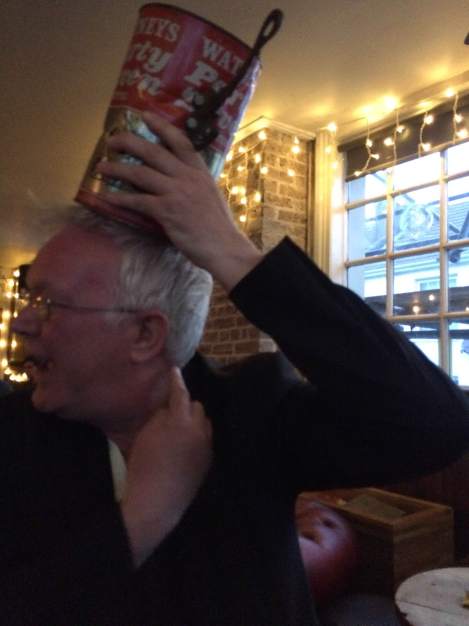