A substantial reward has been offered for any information leading to the discovery of the whereabouts of The Greys CC, or The Mighty Greys as they are also known. They were last seen in early May, although there was a possible sighting in the countryside north of Eastbourne sometime in June, and it looked like they were back in evidence At Streat and Westmeston’s lovely Middleton Manor ground, but they disappeared again before anyone could react.

A sunny day which hadn’t been forecast was a pleasant surprise as Biff waited for Stan to rearrange his cutlery drawer rather than toss a coin. However, Stan enjoys the psychological side of the game, and we finally found out we were batting only after Stan saw fit. Bolstered at the top of the order by the return of Delboy, the missing Jerry wasn’t missed as much as he would have been, but fatherhood seems to have temporarily diminished our hero’s powers, and he was bowled by the young Frank “fire” Brand, after a couple of fours. This brought Terry to the crease, and he too succumbed to Frank, caught behind, though he didn’t think he’d hit it, umpire QB and everyone else seemed pretty sure he had.

Skip had devised a plan where Guy shouldn’t come in before the fifteenth over, so he slipped down the order again, and Alex came out, hoping not to have to suffer the ignominy of being dismissed by one he coached, but in fact cutting the second ball for four, and PSM, in another poor field. Things were looking good for a while, as Biff punished anything off line, and the aforementioned fifteenth over arrived with the score on 70 for 2. Perhaps with his plan in mind, Biff was bowled by a good one for 42, showing again that form is temporary, but class is permanent (although, interestingly, form and class are the same thing when we’re at school, unless it’s a temporary classroom, in which case the reverse is true) with 8 fours in there.

Guy came in but burned briefly and after scoring 13, was taken by surprise by an arm ball from a very good young spinner and was bowled. Ibu had received a promotion, but somehow managed to half block a ball which then rolled on to his stumps first ball. The arm ball then accounted for Messers Newland and Dykes, while Messers Hoare and Gallagher stayed a while before being Speigelled, Robbie to a great catch on the boundary, and Alan caught by Brand senior at backward point. Alex decided Ricky wouldn’t last very long and instead of trying to farm the strike or whatever real batsmen do, started batting like an idiot and was bowled to give Harry Free man his five for, with the score on exactly 100.

Straight round, as tea was not ready, and Robbie bowled like a man with hardly any injuries, and deserved more than one wicket. Ricky opened with him and declaring himself over-sandwiched after tea, was a bit put out to be straight back on to bowl. Post tea fag will be smoked though, even if it is while bowling.  Something seemed to happen to the wicket after tea, and the ball seamed occasionally, stayed low, and swung too, which along with some wayward deliveries meant it was never a dull moment behind the stumps. All 5 wickets were bowled, in addition to Rob’s away swinger, there were two for Zac, one a vicious seamer taking off stump, and one each for Alan and Guy, both full, swinging deliveries. Streat reached the total with 25 overs  gone.

If you do see The Mighty Greys please return them to their winning ways immediately. 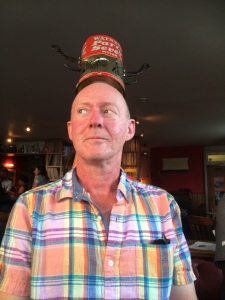 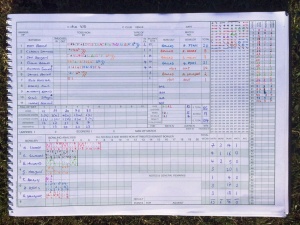