Sunday the 21st saw the latest instalment of a classic heritage fixture The Mighty Greys™ verses Staplefield.  The skip won the toss and elected to bat first, but the greys took a while to get going.  Jerry was dismissed caught behind in the fifth over after a tight start from the Staplefield openers which meant that the first four overs of the match were maidens.  Next man in was El Tel, who together with the skip saw off the opening bowlers, adding 64 before being run out with a direct hit from the boundary, a rare thing indeed.  Having scored 21 Terry, was replaced by Dom who pushed the scoring on with a near run a ball 42, with a number of lovely boundaries including a big six over square leg.  After Dom was caught at third man, Alex continued to keep the scoreboard ticking over with Biff.  By this point the bowling had become easier to score off and both batsmen took advantage.  Alex scored a quickfire 22, smashing the ball through the leg side on a number of occasions before eventually being bowled.  Evil Ben was next in but by this time Staplefield had brought on a bit of pace in the form of Jordan, and Ben was unable to keep him out being dismissed for 2.  The Skip had also been dismissed, caught at mid-wicket for a well-made 56, which formed the backbone of the Greys effort.  Double, Ibu and Alan then did some hectic running to help the greys scramble to 167, a decent score with the outfield slow and boundaries fairly hard to come by.

In their reply Staplefield struggled despite persistent no balling from opener Gallagher.  Good Ben continued his recent form, striking early to remove one of the openers, Gallagher removing the other after some excellent field placing by the skip and a good catch from Dom.  Newland then completely gutted the Staplefield top order, taking 4 for 23 including (??).  One of these wickets lead Gallagher winning PSM for taking a rebound catch, Ibu chasing back to grab a skier, ignoring a loud call from Alan before helpfully palming the ball up (obviously totally intentional) for Alan to grab one handed.  Everyone laughed, except the batsman who was last seen throwing and then kicking his bat all the way to the boundary.  Gallagher was replaced by Sewell, who couldn’t quite regain his pre-holiday form, but did take another fantastic caught and bowled to end up with 1 for 21.  Dave Day was back in action for the Greys, and it was as though he had never been away, needing only 3 overs to take two wickets for a mere 9 runs.  Ibu was also on at this point, bowling with great control and taking the final wicket of the game.  With the rain beginning to come down and the greys having shelled numerous chances to finish it, a slow loopy one induced the last batsman to hit it straight at good Ben who held on to help Ibu to figures of 1 for 13 off six overs and one ball.  The Mighty Greys had bowled out Staplefield for 87 to win by 80 runs, another victory for the world’s greatest cricket team. 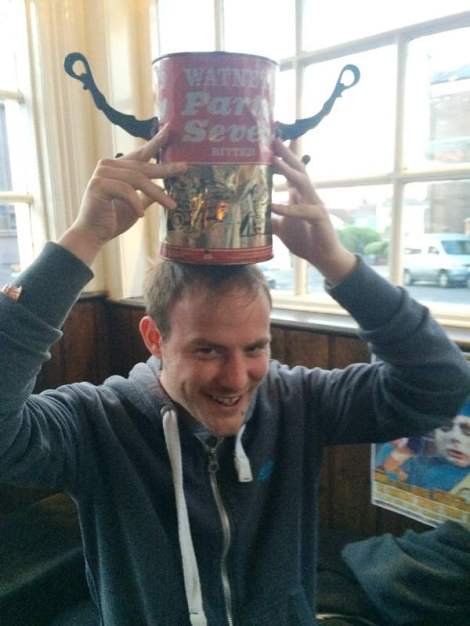 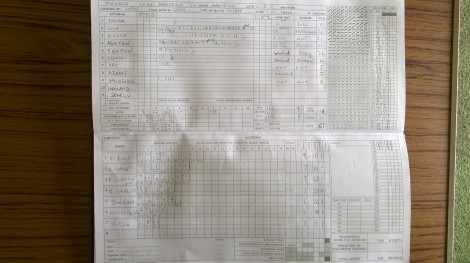 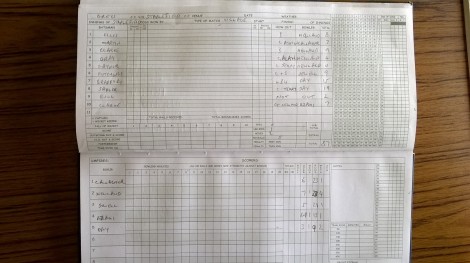