A Screenplay by Guy Ritchie

– Eleven Roguish men sit around a table in a pub. One man stands to address the others –

“Gen’ullmen, I’ve invi’id you ‘ere today to offer you an opportuni’y. When you’ve ‘eard my offer you are o’ course free ‘a leave, but I’m confident you’ll want in, cus what I’m offerin’, my friends, is the charrnce to be legends….”

“What, like the fackin’ Great Train Robbers or summink?”

“Out west in’t they? Dangerous crew. I’ve ‘eard the boss lives in a fackin’ carrstle!”

“Correct. They run the ‘ole fackin’ show in the saaairrth-west, they know what they’re abairttt and they ain’t a fackin’ crew to be trifled wiv. Many ‘ave tried….and many ‘ave failed. These guys excel at making pillocks of anyone who goes at ’em – especially on their own fackin’ territory”

“Fun as it is ‘earin’ abairrtt these charlies ‘n their big swingin’ bollocks, what’s any ‘a this gotta do wiv us?”

“Well, give me a fffackin’ charrnce ‘n i’ll tell ya……..I’ve godit on good orrffori’y that larrst night the entire Arundel Crew enjoyed somefing of a knees-up at their AGM or summfin, and today, if say a crew that was none too shabby itself decided to take the opportuni’y, they may just be susceptabul to a right good hidin’….”

“Where’s the target? What’s the loot? I’ve ‘eard they got two antique shotguns wurrf 8 figures in that carrstle a’ theirs. Impossible to get in there though, shorwlee?”

– blank looks from everyone –

– confused looks from everyone –

“Nice one! Nair, for those of you who ain’t met……introductions”

– Generic upbeat funk music plays in the background as the narrators voiceover introduces each character in turn over a short clip of each of them shooting someone, punching someone, doing up the tie of their snazzy suit, or getting slapped by a young woman (Ricky) –

“The Greysmen are roughly divided into brawlers and marksmen. Lets start with THE BRAWLERS….

Biffo The Bear, AKA The Boss is the leader of the Greysman. Ee’s the guy you want on your side. He sets the traps and he starts the scraps….finishes a lot of ’em too.

Jerry The Postman. So called because ee nearly always delivers, Jerry is right there with Biffo when things kick off. In fact, ee usually frows the first punch. Big brarrrse kahunas.

Ozzie Del is the Greysmen’s most elegant scrapper. Like a kung-fu marrrster in a gang of street-brawlers. His only flaw is that ee’s, well…….Australian.

Jonny Fixtures, AKA The Arranger. Jonny is the lynchpin of the whole operation. Ee’s got intel on every crew in the sairrff. Ennifin’ you need, ee can get it. Nuffin’ ‘appens unless ee’s scoped it and given it the green-light.

Maris Piper. Raised in the shires, ee’s agriculturull but ee gets the job dun.

Fast Alan. Alan is the fastest gun in the ‘ole crew. Ee fires the first shots and ee don’t miss. ‘appy to av a brawl if it comes to that ‘n all.

Good Ben, AKA Quiet Ben. Don’t be fooled by the name, this guy is the Greys sharpest shooter and a stone cold killer. Ee’s spilt more claret over the last year than anyone in the crew.

Gorgeous Ricky Snake-Hips responsible for the deaths of almost 100 people in his lifetime, this guy can handle a gun. Don’t be fooled by the disarmin’ chuckle, ee’ll shoot you in the face then dance your wife inta bed before you can say “For god’s sake Ricky turn this bloody Depeche Mode rubbish off”.

Richie Partridge. Richie has been there, done it and got the t-shirt. A Greys legend and ee doesn’t even need a nickname because ‘Richie Partridge’ sounds enough like a cockney geezer character in a Guy Ritchie movie.

Cool E-O E-O doesn’t get flustered. No-one can work out if its cus ee’s got nerves uv steel or cus ee’s simply too laid-back t’ recognise when a situation is dangerous. Eats two dinners but never gains weight. One of the most accurate marksmen in the game.

Terry The Shadow, AKA The Chairman, AKA The Godfather Last but certainly not least we have the Shadow. So called because ee moves so fast you can barely catch a glimpse of him. As wise as a man with two heads and deadly as a silver-‘aired cobra. Without the Chairman, the Greys ain’t the Greys”

BIFFO THE BEAR (addressing the others):

“Right, if we’re gonna ‘ave any charrnce of pullin’ this off, we’re gonna need a fackin’ good plan to deal wiv Big Baz The Boss. “

“Big Baz is the boss of the Arundel crew. He’s a big unit and he knows ‘ow to ‘andle ‘imself. If we go at ‘im then we can’t fackin’ miss cus this geezer is no fackin’ mug, understand? That being said, if we can get close withairrt bein’ seen then we could just catch ‘im wiv ‘is trairserrs round ‘iz ankulls.

Wait until he leaves the carrstle, then I want Benny to go at ‘im ‘ard. Hopefully he’ll duck into the alley to his offside where Jonny’ll be waitin’ for the facker!

As for the rest of ’em, we’ll just ‘ave t’ play it by ear, but the plan is to get there, surrairrnd ’em and let aiirr shooters go at ’em all guns fackin’ blazin’. We’ll ronndayvoo at the ware’airse behind the barbeque burger joint on the edge a’ town at 4pm. Good fackin’ lack and ap the Greys!”

– everyone stands and raises glasses of ale –

CUT TO: INT. THE WAREHOUSE ON THE EDGE OF ARUNDEL – 4pm

– Biffo, Ozzie Del and Maris are already inside and impatiently wait for the other Greysmen, pacing up and down, checking watches and looking nervous –

BIFFO THE BEAR (very flustered and at high volume):

“That was fackin’ chaos! Where the fack a’ the others? How many a’ their crew ‘av airr shoo’ers sent to the fackin’ undertakers? Do we know?”

“Well I got one uv the fackers. It weren’t tidy but….”

“oh yeeeah, I think I caught that one”

BIFFO THE BEAR (getting more exasperated):

“where the fack are those guys?”

“It went dairrn jast airrz you said it would, boss! Big Baz is no maw!!”

“Me ‘n Jerry done fr’anovva uv the fackers n’ all. Kid was darrncin’ round Alan’s bullets for a fackin’ eterni’y…….anyways, we got bored so Jerry dug a hole for ‘im ‘n I shot ‘im in the face”

– suddenly Fast Alan runs through the warehouse doors out of breath and in a lot of distress. Biffo turns to address him –

“Jesus fackin’ Christ on a fackin’ bike!! Why in fack has ‘ee shot a fackin 8 year old in the fackin’ face?? Was he a fackin civilian?………”

– at this point Terry The Shadow flings open the warehouse doors and calmly strides in covered in the blood of an 8 year old boy. That really bright shiny red blood that comes out of children –

“two burgers for me, ta”

– the Greysmen exit the warehouse only to discover that the Arundel boys have them surrounded! Dun-dun-dun! Rather confusingly, many of the characters who were brutally killed off in Act 1 seem to have come back to life somehow to form part of this deadly-looking circle –

“Hmmmmm, yeah you maybe could have got round this whole ‘dead Arundel chaps coming back to life thing’ by doing a sort of Pulp Fiction-style non-linear timeline. Could maybe have written out a few key scenes and messed about with the order so there weren’t any characters magically coming back to life or anything”

“Yeah, I mean some of it’s not laying out quite as cleanly as I’d hoped but I think at this point I’ve committed to the Guy Ritchie thing. I did actually consider doing a Tarantino script……I was gonna have Terry as the Michael Madsen character from Reservoir Dogs, cutting off an 8 year olds ear! In the end I thought that might be a bit too dark for a cricket match report”

– Biffo and Jerry leap at the first Arundel shooters that draw their guns. Ozzie Del crouches behind a wheelie bin and the rest of the Greysmen retreat back inside the warehouse –

– Good Ben passes Alan the rifle and he shoots Jerry. Meanwhile Biffo is beating 7 shades out of a variety of Arundel shooters and Del has plucked up the courage to join in. It may seem strange that lots of people with guns can be over-powered by two men armed with only bats but…yeah…like I say….some of its not laying out perfectly. Let’s just say the Greys are THAT GOOD! We take a bat to a gunfight and still win! –

– Richie opens the warehouse doors and Del limps in having shot himself in the foot. Jonny Fixtures becomes enraged and charges out of the warehouse bat in hand ready to do some damage –

“Derek, you fackin’ dozy tart! Your plate looks like a fackin’ jellied eel. Get yaself t’ Dave The Kid to get fackin’ sone ap!”

“IT IZ IF YOU KILL A BANCH A’ FACKIN’ PEEPULL WHILE YA DOIN’ IT!!! Nairrrr take ‘im to Dave The Fackin’ Kid’s!”

MARIS PIPER (picking up a grenade from a bag of ammo, walks out of the warehouse saying…):

– he throws the grenade into the action, killing the rest of the Arundel Boys immediately but in no way harming Biffo, who remains out there having fought valiantly the whole time –

– all our heroes are gathered once again round their table in the pub. There is much merriment and the camera pans round each Greysmen in turn as the voiceover says….-

the camera zooms in on Biffo’s face. He turns to face the camera, winks and says…..- 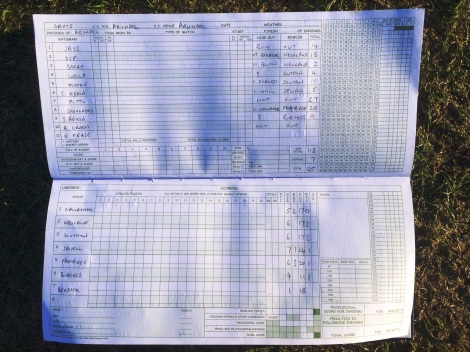 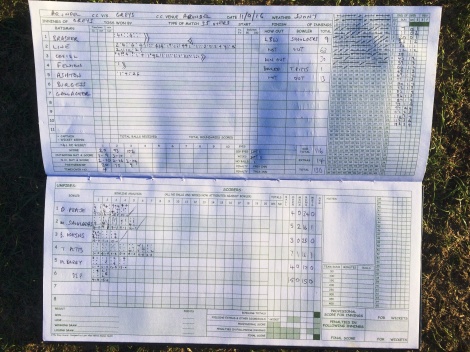 and for those interested in the stats that might influence how many of Terry’s 16 we can tick of…(thanks for this Robbie!)… 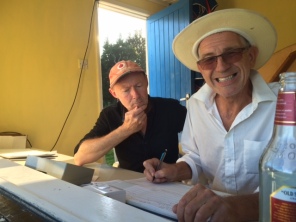