It was one of those days.

“I’m going to the shop, would anyone like me to get them a beer?” I asked, as the game drifted towards defeat.

“It depends what they have. If they’ve got some good ale……”

Returning 20 minutes later, and after getting over the shock that we hadn’t lost a wicket in the meantime……

“Guess what I got,” I said, confidently.

“I can see what you’ve got through the bag. London Pride. In cans.”

It was the same look of disgust seen earlier when Dave had arrived to watch from the boundary and done a double-take at the scoreboard.

“I got them because they were chilled.”

“Oh, so you’ve gone for the Australian thing of ‘who cares what it tastes like so long as it’s cold.’”

“Well they did have some decent bottles but they were just out on the shelves.”

“I’d sooner have had a warm bottle than this….”

It was one of those days. Hope and expectation quickly giving way to savage disappointment.

Not that it was all bad. Any sunny afternoon that drifts into an evening pint in the garden of the Rising Sun before the return of the full-sized pizza back at the Constant has plenty going for it.

It was just that the cricket could have gone…..well, perhaps a little better.

There were plusses. A handful of decent catches, Ben close to nabbing a hat-trick that wasn’t Hat-Rick, some cracking blows from Dom and Al and a fine all-round performance from Tel made sure of that.

And it didn’t help that we got battered largely because they had a batsman who knew all about battering and slammed 150 before bringing an end to the punishment by retiring.

Collectively, we felt like the bloke in the box in Reservoir Dogs, relieved and gasping for air after the golf ball had been released from our mouths.

In reality, though, irreparable damage had been done.

Upper Beeding pushed on to take their total to 298 and after collapsing to 33 for 6, we did well to bat out the overs and reach 171.

Yet it had all started so well.

Jon Jon removed one of the openers for 4 with a ball that nipped back around his legs. A fine delivery, but one that brought Mathews to the wicket. Big mistake.

Suddenly good balls became bad, full length deliveries turned into full tosses and the long boundary didn’t seem quite so long after all.

The partnership for the second wicket raced to 46 before the 82-year-old opener was caught superbly by gully specialist Terry off Dom’s bowling having scored……0.

We needed a slice of luck but it never came. A skier headed towards Alex at fine leg before disappearing in the sun while better chances went down and any inside edges cannoned off feet and pads instead of diverting onto the stumps.

Respite came with retirement and a cocky swagger returned to the fielders one ball later when Jerry swooped for a sharp, one-handed catch off an excellent rising delivery from Al.

The PSM quickly followed when Winrow, at slip, was unable to move out of the way after a Terry turner drew a top edge, the wicket contributing to the best bowling figures of the innings, 1-28 off 8 overs.

Mention, too, for Zach’s catch in the deep to give Jon Jon a second wicket (2-65)

QB would have grabbed the bowling honours had he managed to claim his first ever hat-trick in the final over.

Tea? Well the sweet (chocolate brownie things) and savoury (mini pork pies etc) bites were good and it seems churlish to point out the cheese in my butty was spread as thinly as our fielders.

Back to the middle and it was never really on, was it?

And certainly not when Jerry went in the first over, Biff soon followed, and the rest of the top order collapsed like they’d just discovered Harvey’s had gone out of business.

Terry (28, including a single after a cunning mix-up that turned out to be high-class trolling of the opposition), Dom (55) and Al (42 not out) salvaged pride with impressive knocks, Ashton and Gallagher earning PSM nominations for huge straight sixes and in Al’s case, a swept four.

In an alternate universe, Ben – a PSM contender for his contribution to the art of topiary while searching for the ball – struck the final ball for six to win the game.

In reality, Ben struck the final ball for six.

At least the shop was open. 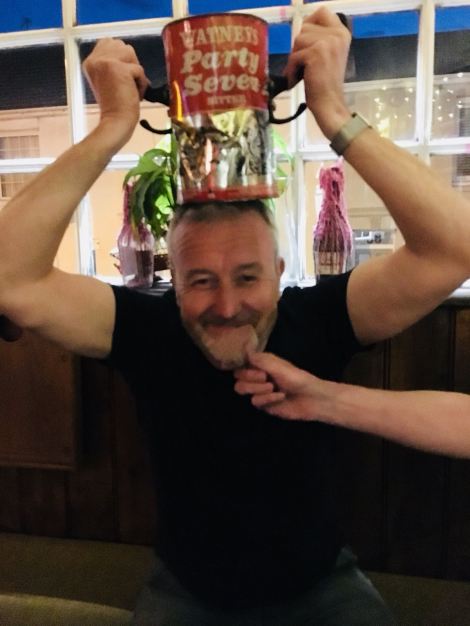 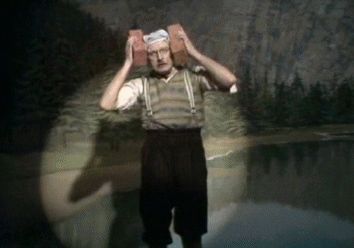 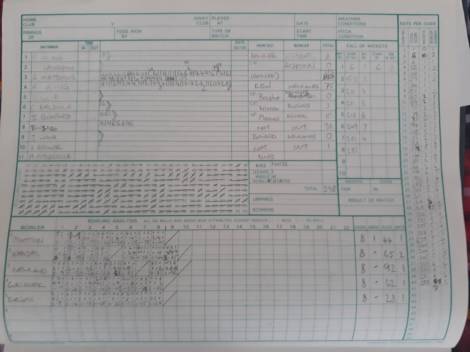 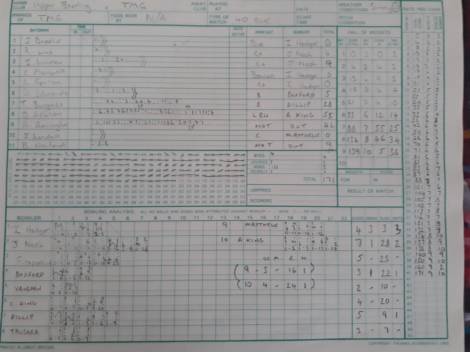 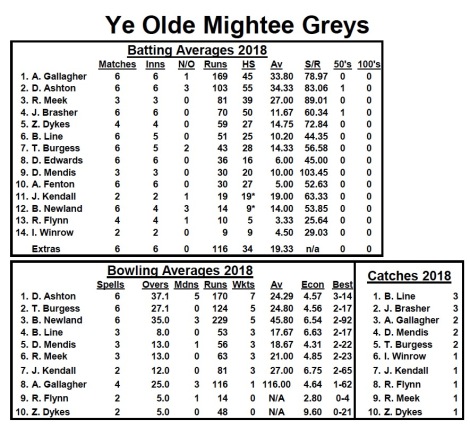 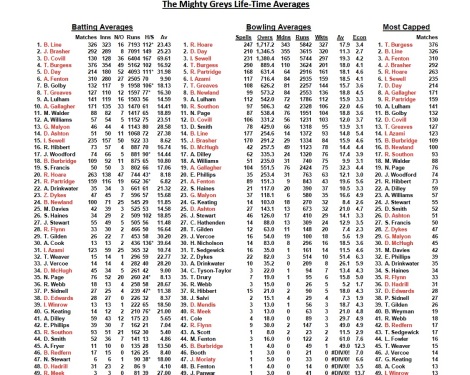 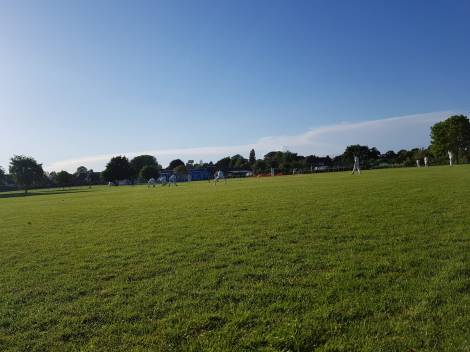 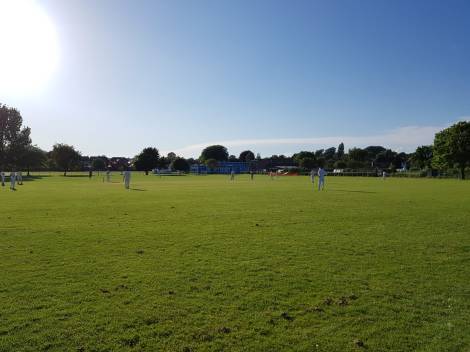 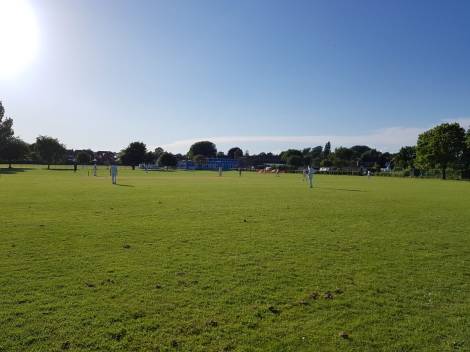 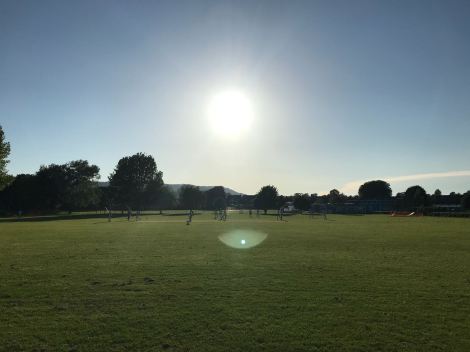 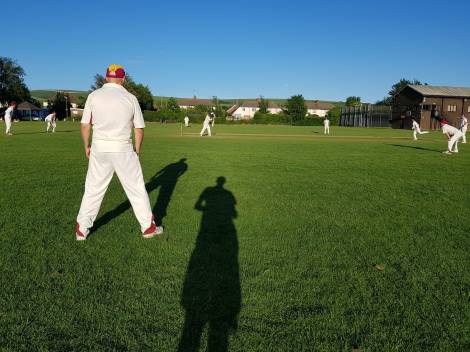 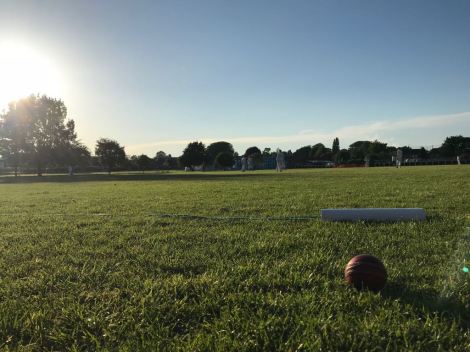 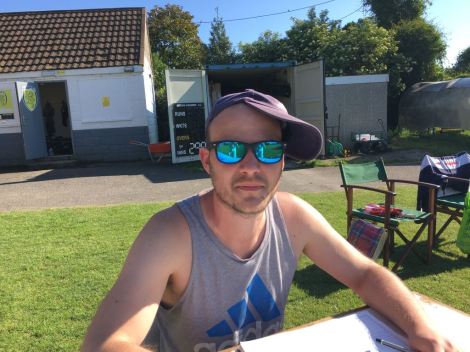 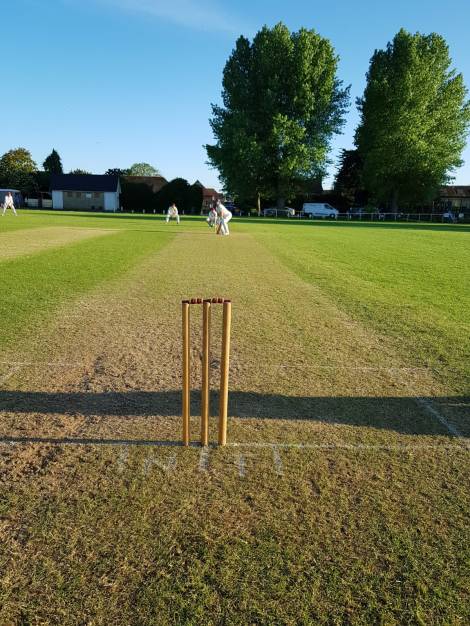 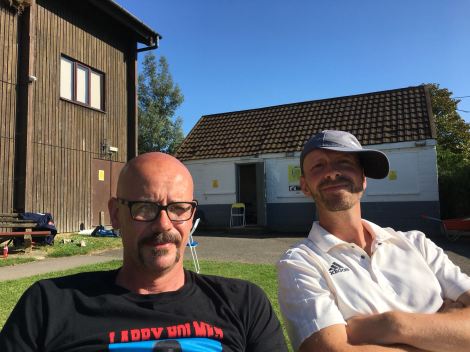 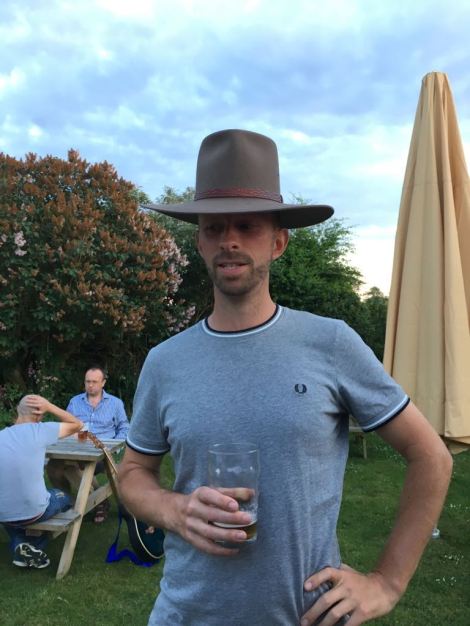 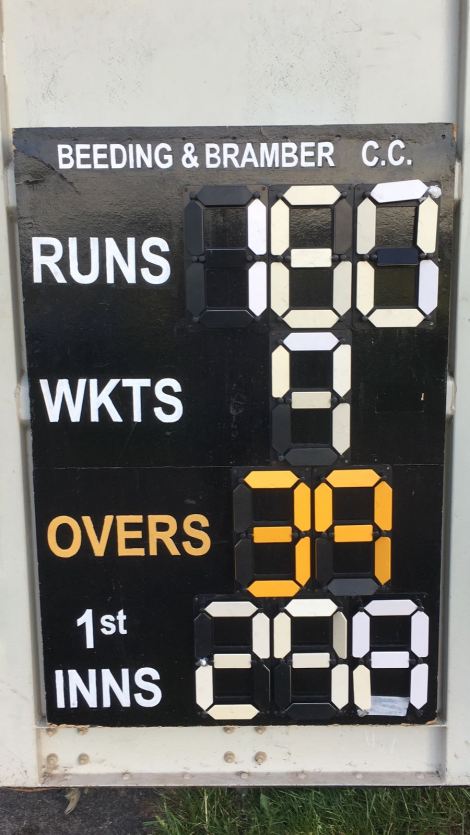