And the online scorecard from Lindfield: http://lindfield.play-cricket.com/website/results/3337181

As per usual for Lindfield it was time game in 42/38 format. Your humble captain has come to the conclusion that it best to lose the toss, and has perfected the calling technique to that end. Lindfield put us into bat.

Hatrick tentatively pushed forward for a C&B. Biff was run out by a direct hit shortly after. Roborbob was then bowled going for a big hit down the ground. Duncan hit a couple of good shots, but then spooned up a catch (He did console himself by wooing a passing cyclist though). Alex played around a straight one and Greys were in a spot of bother at 34 for 5.

What followed was one of the partnerships of the season between Alan and Jerry. A very watchful consolidation period preceded free flowing stroke play including PSM nominated moments: a gorgeous back foot cover drive from Alan and a lofted extra cover drive from Jerry. Proper cricket. The score book records it at 95 but several of us spectators remember clapping the 100 partnership. Alan was eventually bowled by Jones for 61 and Jerry was joined by Dom who set about raising the run rate further including a Jos Bulteresque back foot crunch down the ground. Jerry was eventually bowled for 81 and Dom was left 37no when the Greys declared on 222 after 40 overs.

Finally the slope and I could be together. I wish I could take Lindfield’s slope with me everywhere we play. It just makes you feel better about yourself. This must be what it is like to be 2 stone fitter and couple of inches taller. It gently ushers you towards the crease, the ball comes out a yard quicker and when it pitches, the slope helps again by amplifying the usual movement into the batsmen. In partnership, the slope and I took 5 wickets for 6 runs and they went like this –

EO then chipped in by bowling Grout.

Things didn’t get much better for Lindfield with the first change bowling combo of Dom and Terry making short work of the Lindfield tail. It turned out the Dom and the slope also got on quite well and he bowled with quicker pace still, bowling O’Brien and trapping Green LBW, conceding only 6 runs in the process. Terry took 2 for 2 off his 3.1 overs aided by a fine catch and stumping from Jerry.

Lindfield had been bowled out for 45, 17 of which were byes; a fact that propelled Jerry into the annuls of Greys history by becoming the first Greysman to top score for both teams in a game.

From the dire straits of 34-5, TMGs had somehow gone on to win by 177 runs. As we basked in a combined glow of victory and late summer sunshine Terry wedgied EO, and when accused of being glutially deficient, EO counter commented that Terry acted as his proxy arse.

A great day was capped off by a jug heavy night in the Constant. 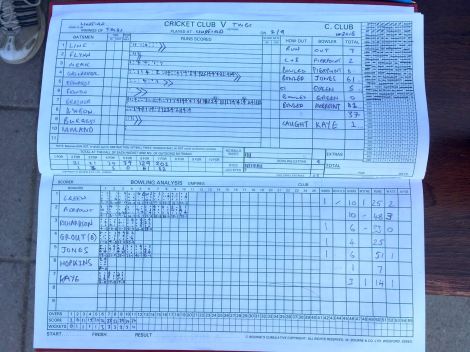 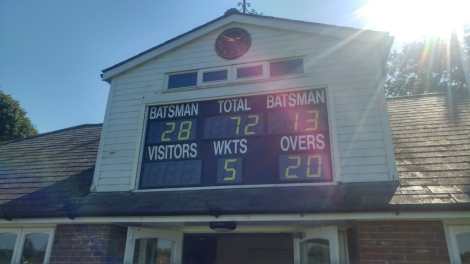 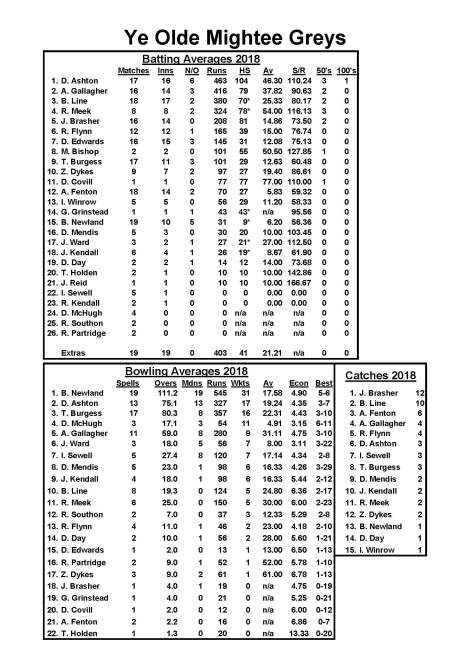 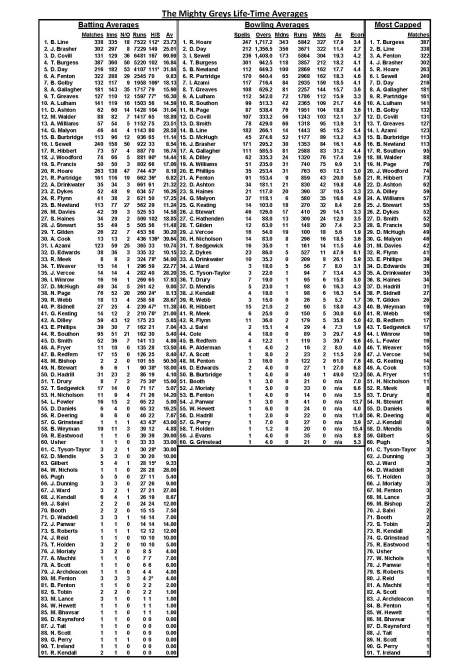