This report was going to be entirely made up of small ads (yes, Ian, a bit like your excellent Viz Top Tips), but I ran out of time….. and also it didn’t really work.

20-60 year old , unathletic, lightning quick, always injured men. Enjoy nights out, weekends in Devon, creative writing, standing around in fields, statistics, beer, banter, wiff-waff, dropping things, drives in the country, KD Lang, ants, boot sales, boxes and boxes of books, destabilising foreign governments, making people redundant, sleepless nights and donkey sanctuaries. Looking for short term meeting near Ditchling for standing around in a field together. Ideally, you will give us a good game, not cheat, laugh at our hilarious banter and be not quite as good as us on the day.

Alex Fenton would like to announce the engagement of The Mighty Greys CC to Cutters Choice CC. The marriage will take place at St James’s Church, Nr Ditchling on 16th September 2018. Dress code extremely casual, and more or less white. Reception at The Constant Service until we all fall over/death do us part.

It was one of those days we often have at St James’s, with sunshine, an audience of non-playing Greysmen, namely Ian, Double D and Del, with assorted partners and future Greysmen and women and the spirit of Biffo via the ether of WhatsApp. Like following us Ceefax, but with fewer updates and ruder (absolute dogwank and shitburger being two of the interesting expletives).

Various rumours circulated regarding the winning of the toss, but whatever the outcome, TMGs batted first, with Jerry restored to the top of the order,

Entertainment- KD Lang impersonator. Any similarity beyond the haircut is purely coincidental.

Services. Do you have any ants which need to be studied? If so, call Al Gal’s Ant Inspectors. No insect too small.

in a batting order deprived of some of its recent venom, and with twice as many Fentons as should be allowed.

For Sale. Pair of Fentons, one slightly damaged.

A solid, if slightly slow start from our openers, due to some tight bowling, Al Gal was the first to fall, just as he’d started to look comfortable, chasing a wide one that went bit wider off the pitch. This will only serve to harden his view that bowling with the new ball makes a difference, man. Whether because of the new ball, or other factors, the bowling conditions were not very batsman friendly early on, and our very own KD Lang-a-like succumbed two balls later, taking us from 25-0, to 29-2.

In strode the first Lincolnian, having only just put away the voodoo doll of Alan, obsessed as he is with winning the batting award on Nov 16th  (I don’t buy all his butter wouldn’t melt, “I’m only interested in the team, guys” bullshit he’s posting on WhatsApp), closely followed by the second. Lincolnian, that is. Lincoln is famous for Skegness, Maris Pipers, having once had the world’s tallest building and racism, and despite also being the second largest English County in the world, no one outside of Lincolnshire has ever actually been there. The two potato men pushed the score on to 57 before Maxwell’s silver hammer let him down and he was bowled for 13. 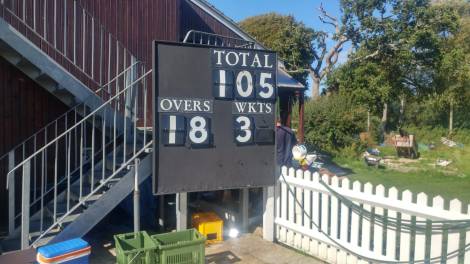 Private Tuition-  GSCE Calling. Includes How to say “Yes” loudly having just hit the ball straight to the bowler, and “No” while running to the other end.

This brought Fenton minor to the crease, after an absence of around six years. He has been asked to play on a regular basis during that time, but the dual effect of no longer being a teenager and his father’s birthday proved the combination which finally drew him back to the Greys fold. Surprised to find that being an adult gives extra power to his shots, and using the Newbery “How much???”, the amazing bat that Ben bought, he started confidently, haring between the wickets like a….hare, I suppose, and striking a couple of fours before the Newbery How Much made a ball carry to a fielder that no other bat would have and he was caught for 17.

This was not what was supposed to happen, as he was under strict instructions to not get out before his dad came in.

Thus denied the birthday present of batting with his son, Fenton senior made his way to the crease with form best described as absent. When you also have no class, there was little to no expectation of any runs coming from the bat of this Fenton, but having nearly spooned a wide one straight to cover (just enough on it to clear the fielder), he managed an equal top score of the season of 27, including a 4 up the hill through mid off and a slog-sweep six over square leg, for PSM. A stand of 66 being the highest for the 5th wicket this season probably says more about who’s been batting at 6 this season than anything else. Dom was still there, in fine form and also hitting a six, this one into the next field, looking to secure the batting trophy and finished on 75 no as Terry and Duncan

For Sale. One Edwards, will run and run. Defective voicebox and ALL FURTHER INFORMATION CLASSFIED. Call 007 XXXXXXXXX.

were unable to get much away from the returning opening bowlers (well one of them, anyway), and TMGs ended the innings on 199.

Tea from Ryan’s mum was excellent and Greysmen duly feed, we took to the pitch feeling our total was probably enough. Removal of both openers first by a trademark Newland inswinger and then by Ricky finding some movement off the pitch did little to dispel this belief, but numbers 3 and 4 steadied the ship, Nayeem announcing his intentions with a beautiful off drive, and the Cutters were keeping up with the run rate all the time. 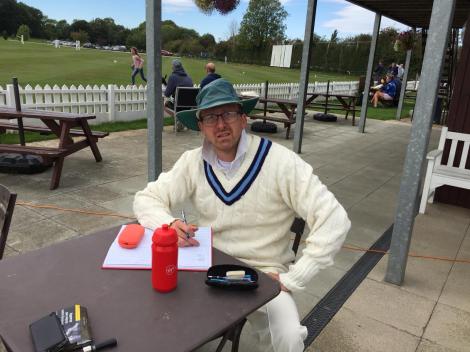 The return of the Rob bot was a joy to behold, but his normal metronomic bowling was somewhere in a pub in Wiltshire, as he struggled to shack off the rust of a year’s absence and with Terry

For Sale. Silver Shadow, 600,000 miles on the clock, but still in excellent working order. Good runner (no responsibility taken for the accuracy of this advert). Reverse gear defective. Excellent brakes.

wicketless at the other end despite some decent balls, it fell to Ashton to remove the Cutter himself for a well made 35. The Ash did indeed make a splash, taking another three wickets and finishing with 4 for 24, including a Zac catch, as ever not being in quite the right place but still getting both hands to it. One cut shot from Nayeem went straight through a slightly broken Fenton, but was superbly stopped by a very rapid tumbling stop on the boundary by a fully functioning one. The Shadow also made a great diving stop, and Ricky barely had time to drop his fag as he made a great attempt at a catch off a firmly struck pull at square leg.

Al Gal coming into the attack reduced the run rate, but CCCC repeatedly managed to find gaps in the field with skied balls repeatedly, over and over again. This was too much for Alan, who was the unluckiest of the bowlers. Cutters got themselves to the last over with only one needed to secure victory. This they did on the second ball, and handshakes all round at the end of a well fought game, played in a good spirit, Nayeem not quite matching Dom with 74 no.

Much Harveys was consumed post match at St James, and more birthday beers back at HQ finished off a lovely days cricket, notwithstanding the fact that the result leaves us equal in the win/loss stakes for the season in Newlands first season as skipper. There will be a towel in the downstairs toilet at the AGM, should one be needed. 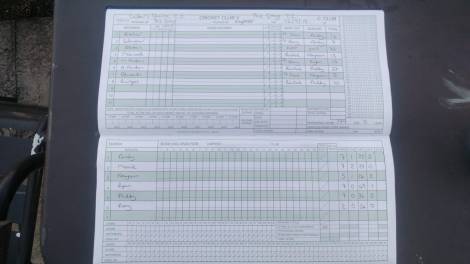 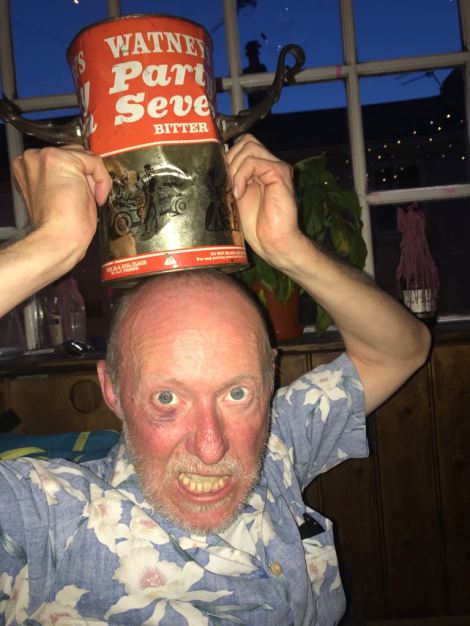 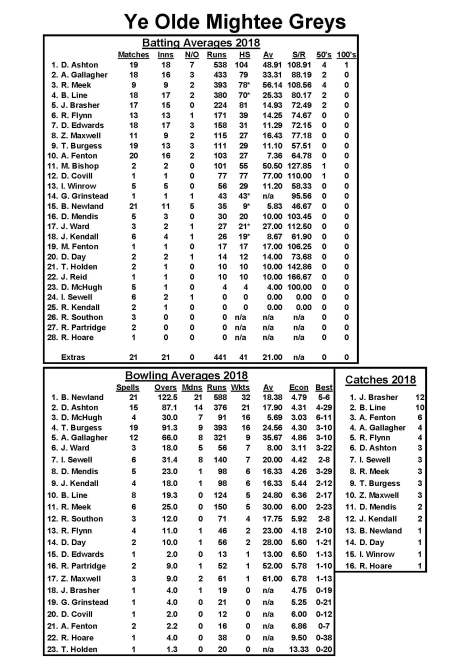 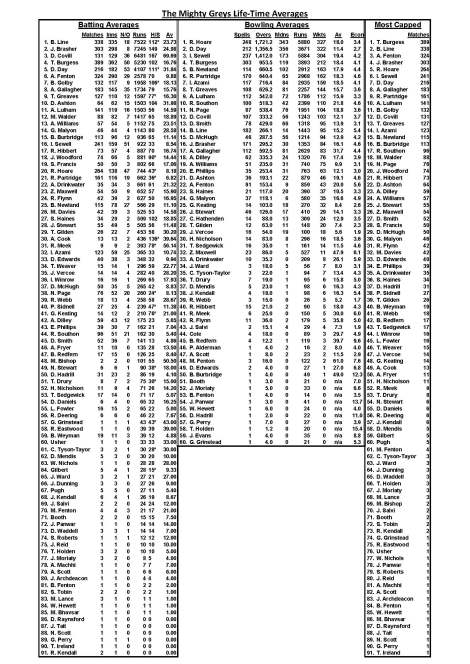