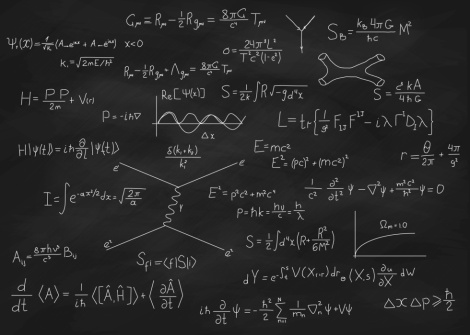 Due to some unsavoury day time quizzing by Mr Sewell, the Mighty Greys Whatsapp group on the lead up to the match was dominated by particle physics, advanced mathematics and harmonic medians. A particularly energetic exchange between EO, QB and Zack resulted in a cosmic shift and the Mighty Greys entered a parallel universe…

…. ahhhh!!!! Beautiful Jevington nestled in the South Downs! The lovely friendly chaps from the cricket club. The wing back chairs. The steep slope up from the wicket on one side of the pitch. The two pavilions… the newer eastern one where delicious teas are served looking down at the ramshackle hut at the bottom that is just one Biff Line tantrum away from collapse at the other.

… but as our trusty TMG comrades pulled into the Jevington ground this year… something was different. Something was amiss.

We were greeted by the same gang of friendly Jevington cricketers. We rested our bones in the same wing back chairs. The tea… oh the tea!! It was as delicious as ever… but something was different. Where there had been “only” two pavilions, there were now three*! Where there had been scorching sunlight, now there was only grey. A cold wind blew from the North, chilling us to the bone. 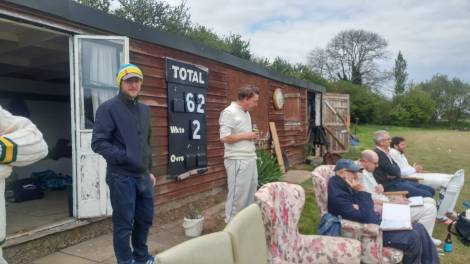 The match kicked off with the Mighty Greys being put into bat… or were we?? In the parallel universe we batted second… or did we? Sometimes it’s hard to tell what is going on.

Our innings had only just started when Hatrick was out LBW for a duck…. In the parallel universe he’s bowled for a duck. He was quickly followed by Biff…. who, caught off a top edge, appeared unusually sanguine on his return to the old pavilion. Something is definitely amiss….

Rob started slowly and patiently. Playing himself in. Before opening up and scoring quickly. One particular straight six landing a dangerously close to a young lady and her toddler spectating on the boundary – the young lady question showing some incredible mobility to shift her and her child to avoid the high speed projectile. As Rob pushed to accelerate the run rate he was out next ball, bowled for 55. In the parallel universe (Rob)orBob is out for a golden duck playing across the line.

Dom was in fine touch and scoring steadily. In came The Clunk.

Dunc the Clunk started slowly. He’d introduced a significant change to his technique over the winter months – He’d changed the way he grips his bat – a key difference from this fixture last season is he actually took his bat out to the middle. Although tentative, the Clunk started sensible and defended well and grabbing the odd single to allow Dom to get on strike.

Then, just as he’s looking settled, bat in hand, DISASTER STRIKES! Or more accurately, Dom’s late calling and poor judgement left poor Duncan stranded a few yards short as he took a very risky single after pushing it straight to the fielder at cover. The Jevington Captain arrowed the ball in at the stumps for a direct hit! Boom! leaving Duncan cursing his strike partner on his way back to the pavilion. The exact same method of dismissal at this ground as last year!

Caught up in his disgust and disappointment at such a stupid dismissal, some ill-advised emotional editing by the Clunk led to one of these expletives finding its way into the scorebook as an addendum to provide some additional description for the run out….

…In the parallel universe, Dom played the ball into space; the fielder was slow laboured and couldn’t throw rather than the best fielder on the pitch; Dom’s call was early enough to give the non-striker a chance to get to the other end; and the non-striker was able to sprint at the speed of Usain Bolt at his peak; Duncan goes on to score a hundred and ten not out; buys two jugs which goes a long way to placate a slightly grumpy Jerry and Alex having not gotten to bat; AND PSM IS AWARDED FOR A BIT OF GOOD CRICKETING!!

Dom the run-out meister is out bowled for 85. He hit “a few” good shots and there was a fair bit of time spent retrieving balls from the field next door.

Alex scored a quick fire 11 before succumbing to a straight one. Enter Brasher who scored a lovely fine cut for 4 off his first ball. In the parallel universe Jerry is opening and gets caught at slip off his first ball playing exactly the same shot.

Our time is up and The Mighty Greys finish on 206.

TEA. An early contender for tea of the season. I’ll bet the closest competition will be at Luppitt.

The Mighty Greys headed out to field with a good score on the board and feeling confident bowling on an unpredictable wicket.

Ben and Alan bowled well and very economically but sadly without any luck. With the Jevington batsman struggling to pick up the run rate EO came on at first change and bowled well. In the parallel universe, Alan, QB and EO share the wickets around and concede very few runs with EO ripping yet another pair of his trousers in celebration.

Although runs are hard to come by, the Jevington batsman just don’t look like getting out. Enter the Shadow. His guile and cunning quickly make the breakthrough – bowling one and having another caught by Hatrick! In the parallel universe one of the Jevington opener’s premeditated sweeps comes off and he connects and the ball sails for a huge six.

Dom ran out the pick of the bowlers skittling 4 of Jevington’s batsman as TMGs pushed on for the win.

Hatrick bowled well to no avail. Biff grabbed one wicket with Ashton running out to catch it.

Despite TMGs best efforts, we can’t quite get the remaining two wickets required to win and the match ends a draw. In the parallel universe, we are playing 40 overs rather than village rules; and TMGs get the win! Yay!!

PSM was won for an embarrassing diplomatic incident caused by Duncan’s addendum to the scorebook which the Jevington Captain had misinterpreted as being aimed at him rather than Dom “the run out master” Ashton. In the parallel universe Duncan doesn’t scrawl in the scorebook; there is no diplomatic incident and Dom wins PSM for running out one of the opposition batsman rather than one of his teammates.

* sensible move by our friends at Jevington to leave the opening of their new pavilion to after Biff had batted. We can book him in for next season for demolition of the old one if required. 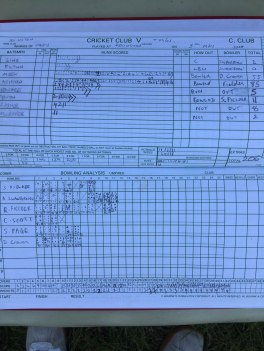 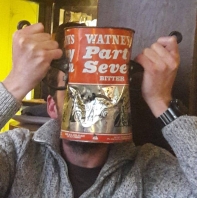