On a cool and windy Sunday the Greys showed up at a picturesque cricket ground, ready to engage in the ancient warrior tradition of village/ pub cricket, and re-acquaint themselves with old foes, Bolney.

At the toss Biff called correctly and elected to bat first on what looked to be a good strip.  Del moved up the order to open in place of missing (maybe never to be seen again) Jerry.

The opening bowlers for Bolney were clearly in a generous mood.  They bowled short, and were duly dispatched to the boundary with unerring efficiency.  Fifty runs had been scored by the sixth over, and one hundred by the twelfth.  It was absolute carnage, and very enjoyable to watch.  Greys skipper Biffo Line eventually fell in the sixteenth over for 65, bowled, ending an opening partnership of 123.  The breakthrough brought no respite for the Bolney bowlers however.  With the introduction of number three Timmy Greaves the scoring rate climbed even higher, seventy nine runs being added in the next eight overs.  Del boy carried on unaffected by the loss of the skip, and Tim smote the ball to all parts, hitting five fours and two big sixes in his quickfire innings of 43.  By the time the second wicket fell the score had moved on to 202 from 24 overs, Tim the batsman to go, bowled going for another big hit.

Next out to bat was Alan Gallagher, who, after plodding about a bit also joined in the fun, eventually getting going with an off drive so textbook, it belonged in a library.  It was obvious that the declaration was imminent, so with reckless abandon, Alan danced down the track, only to miss the ball, turn around and see that Terry (next man in) had run out to the middle, knocked the keeper out of the way and stumped him for 21.  To say the greys fashion guru was keen for a bat is an understatement, and he took full advantage of the opportunity, going on to magnificently block out the rest of the innings.  After all, we already had plenty.  The declaration came one over later with the Mighty Greys having scored 264 for 3 from a mere 33 overs.

Special mention goes out to “the scum” for a fantastic knock, scoring 112 not out, top stuff.

Tea was fantastic, with everything a Greysman could ever want; this correspondent particularly enjoyed the scones.

The Bolney innings started slow and got slower, I won’t go into too much detail as reading about a team batting for a draw for 48 overs  would be just as boring as watching it.  So boring in fact that one of the fielding Greysman came down with an acute case of BID (boredom induced dementia) which manifested itself in a strange case of verbal dysentery, specifically puns so terrible that even a hardened tabloid hack would roll into a ball and cry upon hearing them.

There were some highlights however.  The first Bolney wicket fell in a masterful over from Double Dee, the batsman flummoxed by the first five delivery’s, bowled by the last, and the continuation of Skip’s Midas touch with the ball (seasons figures, 7 overs, 9 wickets for 13 runs) being the top amongst them.

Despite excellent bowling, from Partridge, Sewell, and Ibu, along with Day and Skip, the lack of scoring intent from the opposition scuppered any chance of a Greys victory.  In the 48 overs bowled there were 25 maidens (Bolney scored off less than 9% of all ball bowled!), and by the end of the innings Bolney had accrued a measly 79 runs for the loss of 8 wickets.

The match was drawn but the Greys took a comfortable moral victory, and a fine day was had by all.

PSM winner, Alan, for off-drive straight out of the MCC coaching manual. 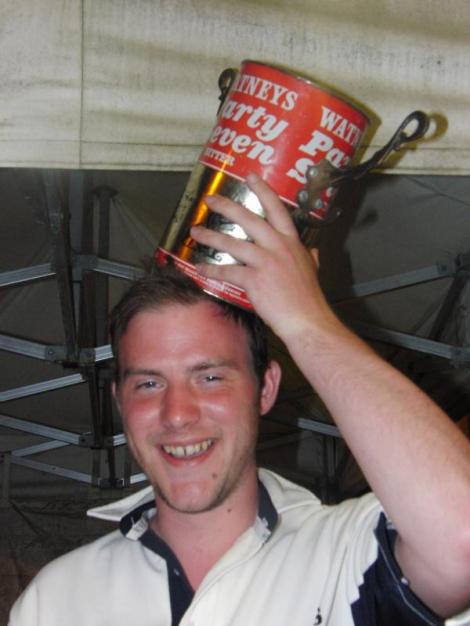