After a spineless drubbing the previous week, many Greysman arrived at Warninglid re-assessing their worthiness to occupy valuable space on Sussex’s timeless village cricket squares. Well, your correspondent was at least. What ensued was enough to reaffirm everyone’s faith in team, in game and in the whole rigmarole of Sunday cricket.

With the sun droning heavily over the metaphor of trees, and the Home side providing two competent and extremely reasonable umpires the Greys were happy to settle on the benches as Biff and Gerry took to the middle. The wicket was a bit up and down early doors and Biff never really settled, and then missed a straight full delivery, but Gerry and Des moved the score on briskly past fifty, Des in particular playing some great back foot shots on both sides

Then, (cut and paste here from any previous match report), Gerry fizzed one straight to mid-wicket and was very well caught. In steady succession we then lost Alex, Alan, Des and Terry. Des for a powerful 25 caught at Mid-on. Tel was bowled round his legs, which to anyone who attended nets, beggars belief.

Suddenly we were six down with only ninety-something on the board. There was an hour before tea as Ian Sewell joined his best mate Dave Day in the middle. The strategy was unequivocal. Don’t get out. No risky shots. Take shingles where possible and get to a hundred. After that, same again – get to 120. Ian and Dave, or do you think Dave and Ian sounds better?, followed the plan with supreme discipline. After blocking out three or four overs, the runs slowly started to come in ones and two’s.  Dave dispatched the odd loose ball for four and first 120 then 130 were attained. There was only one lucky escape when Ian was called for a quick single “Waaaii- ess!” The stumps were hit but, to general bemusement, the finger was not raised. “Close, but not close enough!” burred the rustic arbiter

Things became somewhat easier when Warninglid brought on seasoned flighty spinner Cam for his first spell of the year. He exhibited the most outrageous fit of the yips, yaps and spazzles since Eden’s* last game for the Greys in 1992. He pitched it two yards in front of his feet, over the batmans head, and hugely wide to the off and leg – four or five no balls/wides in succession, repeatedly. Sewell cleverly turned up the pressure on the hapless oaf by not playing at the occasional legal delivery that he produced. By the time he was withdrawn the total was way past 150.

Dave was becoming increasingly aggressive knocking a couple of boundaries per over. As five p.m. approached, Sewell’s puny upper torso was devoid of strength or control but his girly swats somehow evaded the field. Dave, meanwhile, completed a chanceless fifty before chopping on to his stumps (or was that Cuckfield?) It was the final ball of the innings as ‘Rocky’ Hoare swaggered to the crease. It was points decision but ‘Rocky won it with an uppercut for four. (Joke here about karate kicks, dented taxis or “Saying it to my face!”)

The Greys had put up 218, defendable on a fairly bouncy wicket, but more importantly a new Greys all-time 7th wicket partnership had been created. 109 comes to mind. To live in the annals for time immemorial! An inspiration for those yet to come to whom our names will be as those inscribed on cenotaphs, whose heroic deeds and selfless sacrifice fill us with humility. Tea was quite nice.

Ricky and Rocky opened the attack. Rocky slowly built up excellent pace and movement. Ricky offered the batsmen a bit more variety and was rewarded when Des took a great catch at his feet – that ball was travelling! Ricky and Rocky continued to bowl well but the poorer balls were being punished and the ’Lid moved rapidly past 50. Biff had already dropped a tricky skier at Long Off to end a long run of great catches in the deep, when Rocky, now bowling superbly, saw a regulation waist high catch spilled by Sewell at first slip. That was just the start of it as catch after catch went down – twelve in all. Even stalwart fielder Alan fumbled when he had made good ground and was looking set. Dave Day dropped catches in successive balls – both hard and low to his left hand. However, by far the villain of the piece was the Skipper and catching coach, Biff. Four times he lumbered round under an inviting swirly one only to end up in a heap like a Teddy thrown from a pram, the ball rolling teasingly a few feet away. Commiseration turned surely to derision as our leader proceeded to make us a laughing stock with his antics.  The years of hard work that forged the Greys into a serious outfit were being undermined by his Norman Wisdom routine. The tea ladies roared “He drops to the left, he drops to right, ….  (popular song that Summer!)

The young bucks of Warninglid were riding their luck and scoring freely and defeat for the Greys looked a possibility. Ibrahim Azami replacing Ricky saw six chances go begging before normality began to reassert itself. Dave Day broke the spell, holding the hardest of his three chances, then Sewell plucked one left handed that had seemed to be through the gap. With Dave Day now on and bowling very well The Greys regained control of the game and the run rate for a Warninglid victory was up to eight an over. To their credit, Warninglid were not interested in a draw and their No.9 threw the bat at everything, smashing two fours and a six off Sewell’s first over. An unlikely victory was averted by a fabulous stretching caught and bowled by Des. With only one over to come, Sewell completed his best performance in years, (cricket), by having the young tail-ender gloved to second slip where waiting with strong mannish hands, was none other than his better half Day. What a team! 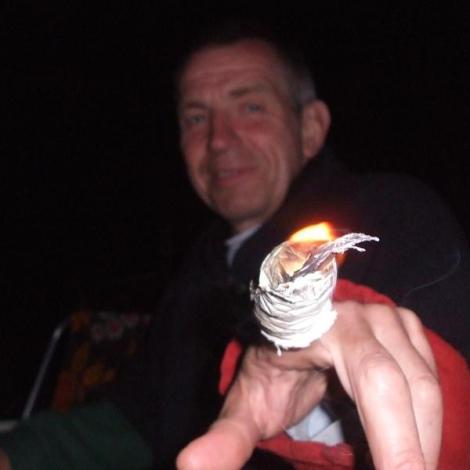