Quote of the AGM: Tel, as our new Chairman is the “ceremonial guru to the moral compost of the team”.

1. Dinner! A delightful homemade spinach and ricotta pie, served with roast potatoes and a rocket and sundried and cherry tomato salad. Polypin of harveys on the table. Lovely, thanks Biffo and Urs! 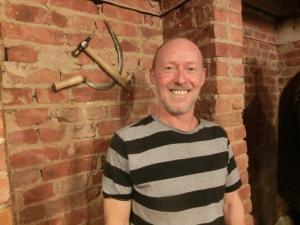 4. Reflection on this year: A Skipper’s perspective. This was a good fun season, apart from those 3 games in the middle where we didn’t really stand a chance, it knocked our confidence. We dropped loads of catches. It’s a perenial problem. We’ve talked about fielding practice, but nobody’s done anything about it. I wonder whether need to be a bit easier on ourselves, we’re getting a bit old. We’re gonna drop catches. Perhaps we can do this at nets when there are loads of people. A week before the season we’ll go up the park and do some catching. A big thank you to all the officers of the club and senior greysman and everyone else too for their efforts. The main thing is thanks, it’s been a great laugh, and the only reason it’s such a great laugh is because of the effort that put people in. 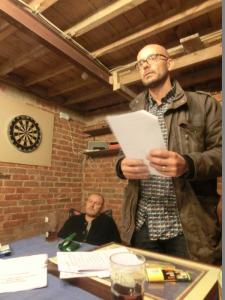 5. Vice captain’s report. Nets are booked!! they start 6.25-7.25 on Thursday evenings, starting on 7th November, until 17th April, but we can’t do 26th Dec and 19th Dec. That’s 22 nets costing us £715 pounds. We can cover this if we get 7 people at each net (and then we” make a little). £5 per net to remain. Big up Alex for booking THAT tour, and for fronting the dough, NO mobile phone signal, Tim would have been fucked, drinking a bottle of scotch with Jerry, dropping 2 with Ricky, and a full day of drinking on Sunday because of the rain. A special thanks to Barry for making this the summer of love.

6. Refraction on this year: A Treasurer’s attempt to bend the truth. This is the easiest review of the year ever he’s had to do, because we’re not broke. We are making £500/season. Paid Del £50. The financial situation is well balanced. Nets breaks even. It’s all good. We can spend £400-£500 on tour. We should go back to the good balls (NEWBERRY TEST, it’s worth the money!), the other ones were rubbish. If EO dies, we need to sort a bank account for our club. Action: EO will sort this.

7. Reclassification: Scum tells all.  fantastic website, all free now, some amazing reports this year, some people still not submiting reports. Ben suggests we break  their typing fingers. Biff suggests wearing the cowboy in the field until the match report is in. The hat of shame! voted in! Alex thanks Del for all the efforts with the website, it is appreciated.

Voted IN, voting in committee members before Awards.

9. Awards for this year:

It was noted that the previous winner needs to give it to the current winner, so Robbie needs to give it to himself. Chairman tasked to sort all the trophies. There was a debated about what side is the back of the bowling trophy. Robbie is carrying a wire.

And the winner is…..Del for his runout! 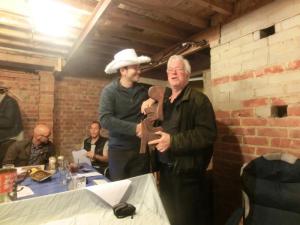 QB for for his outstanding committment in particular on a day when we really needed him. (2)

Robbie for his massive pillage and his amazing team bonding friendship. (2)

Biffo for his commitment to organisation (2)

Alan is nominated for not being here, but being the ever present. (0)

Alex, the club would not be what it is without him. (4)

DD because he is a stalwart for the club, and because DD has had a few drinks (0).

Del for website and slack taking and for Ali (2).

And the winner is ALEX!!! 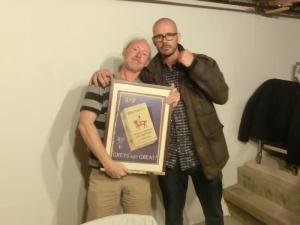 New post of chairman to chair the meetings and ceremonial guru to the moral compost of the team. Terry wins, Alan doesn’t win.

Richard confers, that Del will do two masterclasses on fielding/catching in the park before the season starts. And it’s a good excuse to get together for a few beers. This was even voted in! Del will organise.

Terry many thanks as chairman for chairing the meeting. The meeting is closed at 22.31pm! That’s a new record.