The Mighty Greys are a team of ageing non-athletes, who for years have habitually beaten teams of sullen, muscle-bound farmers boys and disrespectful, over-confident oiks, with their own inimitable brand of cricket. Experience, know-how and bowling of accuracy and guile, combined with circumspect, un-showy batting and mediocre fielding has made the Mighty Greys a match for the best. There you have it! – except that Warninglid are neither sullen or disrespectful or Oik-ish (except that tall one with the mongoose!) and are a great bunch to play against.

The salient feature of this match was the wicket. Wetted thoroughly at 1.30 by the lees of Hurricane Bertha, or maybe a heavy shower, it was slow but offered the bowlers good sideways movement and comedy steepling bounce off a length. Whether by our design or theirs, TMG batted first.

Innings First of the Greys.

Ian “Hopalong” Wiggy-Winrow, the Bolton Cowboy, not to be confused with Alan “Wiggy” Nabisco-Gallagher, was the latest in a lengthening list of ill-fated stand-ins for Jerry Brasher at opening bat.  “Hopalong” looked at ease, getting a stride in, but was undone in the 4th over. The bowlers had just to get the ball near a length and then watch the fun. Captain Biff Line went soon after – a ball that jumped and went away, just taking the shoulder of the bat. With only 10 on the board, in came replacement No.3, French import, DelGarcon Coville and makeshift No. 4, Alex “Alex” Fenton. Both knew the chips were down and were resolved to build an innings for the team. The result was a match-winning partnership of 107.

In their different roles, of attacking shot maker and anchoring support, they were superb, especially in the light of subsequent efforts. They both had to ‘wear’ unavoidable lifters and survive unplayable deliveries but by patient application, restraint and adroit running the score gradually began progress. After the opening bowlers were withdrawn, our boys had more loose deliveries to punish but still they resisted the temptation to drive – a particular triumph on the part of Fenton. Fenton was also able to manipulate the strike towards the formidable* Monsieur Coville, who alternating power and finesse scored all around the ground on his way to a magnificent 86.

*The French don’t have a word for ‘formidable’

When Fenton was very sharply caught at midwicket for 19, the Greys could reasonably dream of a total in the region of  180. However, the true nature of the wicket was revealed again as Rick Flynn, Greys old-timer, Trevor Holden and Greys old-timer Terry Burgess all went cheaply. With the outfield getting quicker and the wicket drying all the time 130 was unlikely to be enough.

With that in mind, Ian Sewell and Richard Partridge looked to be positive and were pushing sharp ones and twos, until Partridge forgot what he was doing. Sewell called for a leg-bye and running to the danger end had judged it well. Partridge, however, too inflated with high dudgeon to run quickly or ground his bat, was run out at the bowler’s end.   Nabisco-Gallagher then got a harsh lbw which brought Ricky ”Mr Bojangles” Southon to the still lively crease for a long awaited go at batting. Looking uncomfortable against the recalled openers he waved away the proffered helmet and continued to flinch, and flail at each delivery, connecting with one for four, until inevitably bowled while somewhere outside of leg stump. All out 157.

Innings Second of the ‘Lid.

The ‘Lid openers got off to a brisk start,  16 off the first three, and the previous weeks steam-rollering by the Long Men was not far from the mind whence came a pivotal moment, later awarded the Party Seven honour. The in-form opening bat mistimed his pull off Ricky Southon. Just in front of square leg, Sewell started to go the wrong way, expecting a chase to the boundary. Somehow he twisted his body mid air to the left to take a one-handed, diving catch, millimetres off the ground.  Sewell was mobbed by ecstatic team-mates, who briefly forgot that he had recently lost their £700. Minutes later he was back as Pariah and having to bear the averted gazes and spiteful whispers of the sanctimonious cunts he calls team mates. Honestly! Have you never done anything stupid? Let he who is without sin cast the first stone!

Then Richie Partridge got in on the act, diving to brilliantly take a high two handed catch at short cover! Warninglid were doing what they have done before – getting out playing big shots before they are set.  Alan Gallagher got the No.3 with a rising delivery gloved to the in-field, but it was Southon, bowling with less pace, that was wreaking havoc, with the lid’s top order. He got 5 for 33 with a mixed bag of bowling that took full advantage of a capricious top.

Sewell and Partridge came into the attack and continued to lay waste. Sewell had the rare delight of making the not-diminutive Church sniff leather as the ball snorted off a good length. However, with eight down the Lid started to play as the openers should have done. Blocking, leaving, playing “cheeky” shots down to third man and only gradually introducing the full force of the bat they stopped the rout. However, still needing around a hundred more it was a lost cause.

Sometime, later, the sun was at its nadir, those wearing sandals felt chilly, and it was not fun anymore. Sewell, Partridge and Burgess had proved ineffectual against sensible batting and the score was now over 100. In desperation Biff turned to the only person he can really trust and finally induced Church, who had scored 25, to play on to the stumps while flashing outside off. Surely that was it. Sewell was trying to raise morale with the modified traditional call to wrap things up – NJ, NS, NP!

Sometime later, TMG, unthinkably, were looking to the scoreboard, with which no-one had bothered for 10 overs, as the maths became a concern. 6-ish an over! In desperation Biff turned to the only person he can really trust – Ricky Southon, who quietened nerves a little, again finding the trampoline spot and producing a few dot balls. The nightmarish threat of an unbelievable Warninglid win was finally quashed by the rejuvenated Ricky when making a very brave and difficult stop on the square leg boundary. Gallagher duly bowled out his final over cheaply and victory was assured.

Thankfully, we were spared the last two overs when Captain Line, back on again, produced a fine swinging delivery to remove the Lid hero, A. Vaughan’s, off bail.  Thank *** for that, everyone said. 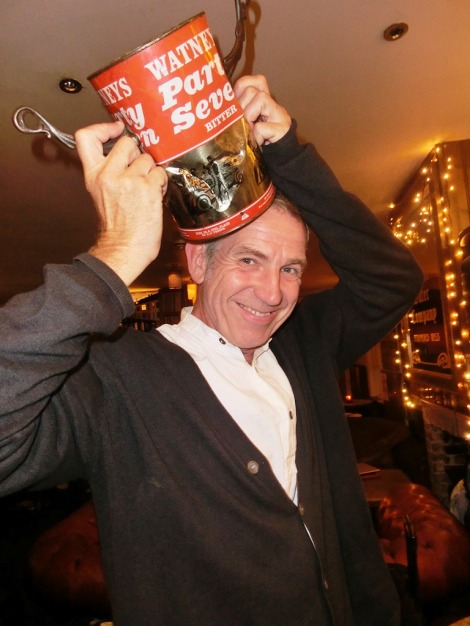