It was a bright, sharp day; a stiff British wind swept up off the frigid sea, howling across the lush grass (for it is in East Brighton Park that our scene lies), and the sun beat down relentlessly, or as the French would say “Et le soleil doit abattre et brûler tous ces gens qui vivent dans les collines” [1].

The Mighty Greys lost the toss and Cutters Choice elected to bat first on a very green wicket.

TMGs opened the bowling with Gallagher from the Grassy Bank end. Taking advantage of the wind to bolster his inswing, he looked dangerous, beating the bat and forcing some awkward shots, but that all important wicket eluded him – 7 overs for 18 runs, 0 maidens, 0 wickets.

Southon steaming in from the Pavilion end with some disciplined bowling, taking out the number two and three CC batsmen in quick succession, his Machiavellian wit playing no small part. First to go was CC’s No. 2 “Dan” out for 32, dismissed with a brilliant catch by Azami at slip. Second to go was CC’s No. 3 “Dave” – plumb LBW, out for 0. Nifty bowling – 7 overs for 34 runs, 1 maiden, 2 wickets.

Flynn from the Pavilion end galloping in, nostrils flared; all fired up for his first match of the season. Taking an important wicket – bowled CC’s remaining opening batsman for 17. Good spell. – 4 overs for 18 runs, 1 maiden, 1 wicket.

Newland from the Grassy Bank end, bowled well, but the Gods were against him today – 7 overs for 55 runs, 0 maidens, 0 wickets.

CC had started to get into their stride, adopting a bit of a smash and grab approach to the batting, lofting shots nonchalantly over the infield. TMGs had dropped a few tricky catches, but it looked like this was a good batting pitch, and the outfield was quick.

Newland and Hatrick Flynn both charged in for a ball lofted weakly into the covers. One of them surely called out a grunting roar and marked their musky ownership of that wayward leathery orb? Nay, a fruitless quest twas for mine ear, finding only the rush of the wind and the quick shuffling of boots on the grass.

They collided in a blur of limbs at an enormous velocity, the earth shook and quaked; Hatrick’s knee was all twisted and knackered, Newland’s lip was fat, the catch was dropped.

Azami from the Pavilion end, taking some good wickets – first went the middle stump of CC‘s No. 4 Malik, out for 55. Second was CCs Tayyab out for 51, caught by Dykes on the deep square leg boundary (PSM). Next to go was the CC No. 8 bowled for 5. Good spell. – 6 overs for 35 runs, 0 maidens, 3 wickets.

Biff (Red) Line from the Grassy Bank end, keeping a lid on it. And the reward eventually comes with CC’s No. 6 “Sam” dismissed with a catch from Newland, out for 0. Good session. – 4 overs for 17 runs, 0 maidens, 1 wicket.

Despite CC opening the bowling attack with a flurry of wides, the ball was staying low and it didn’t look much like a batsman’s pitch.

First to go was Brasher, caught at gully for 0. Line was starting to make some runs and looked like he was settling in, but he was caught out by the unpredictable bounce with a ball that was fast and short but stayed low, out LBW for 23.

Covill narrowly avoided being caught at slip early on, and went on to play some fine strokes and dig out a lot of pea-rollers for a healthy few runs before he was finally bowled for 35.

Solid batting from Fenton, finding his form; and smashing a few beauties before he was bowled by CC’s Sarf for 12.

Next up was Burgess, battling valiantly against the prea-rollers for a couple of overs before he was bowled by Sarf for 0. Then Dykes, out for a Golden Duck, bowled by Sarf.

Some solid strokes from Newland; picking up the run rate, swinging wildly to left in a classic post-Blarite manoeuvre and smashing a huge six over fine leg and earning himself a PSM nomination for the second match in a row. Bowled by Malik for 7.

Southon swaggers out to square, “I’ll show those pesky Custard Cutters” he says, but it was not to be; bowled by Malik for 2.

Some solid strokes from Gallagher, Azami with some cheeky jabs, a couple of nice fours and some good running between the wicket to round out the innings.

And it’s off to the pub for a few well earned pints of Best. Well played chaps.

[1] “And the sun shall beat down, and burn all those people living in the hills.” 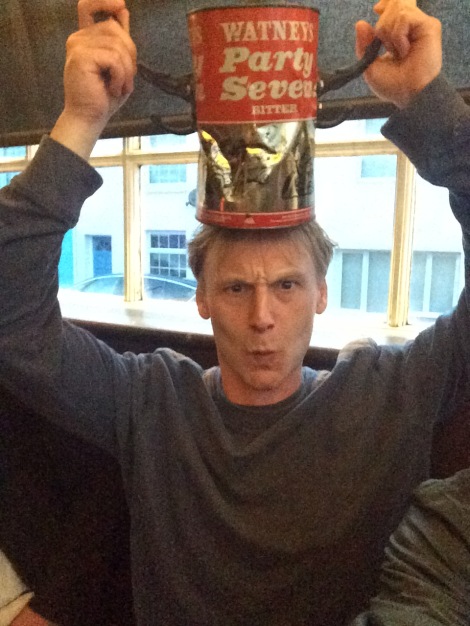 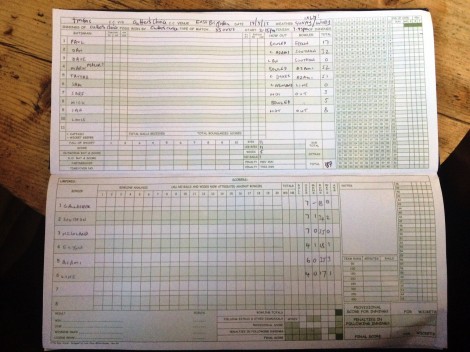 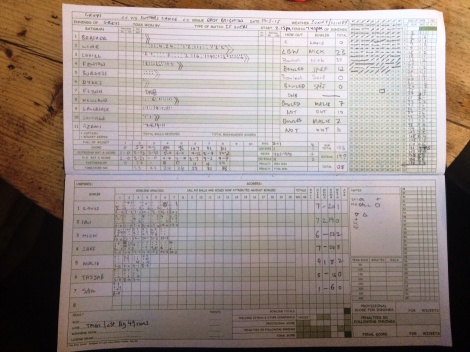