If you have read the previous episode of this turgid melodrama you will understand that the Greys players, it has to be said, arrived at the anointed hill top fearing the worst.

That is not to say they were not in good spirits. The high quality and benign nature of this year’s intoxicants,(thanks especially to Dark Star,) meant that many Greysman had never arrived at Luppit feeling so compos mentis. There were three exceptions, Dave D, Timmy and the Chief. They were short-tempered and jittery and suffering from reverse peristalsis. I wonder, children, can you guess what they had been doing?

Biff, How Low Can You Go?

The Greys batted and we were presented with a repeat of yesterday’s piss-poor batting Biff(1), Jezzer(0), Terry(0), Timmy(5) and Zach(4) going very cheaply. Alex Feniton(12) again looked more purposeful than his team-mates but didn’t score freely. The opener from the road end was smart but he was hastily pulled from the attack after four overs to allow time for the tea to be laid out. The entire majority of the wickets were self inflicted, mistimed or ill-judged swipes at inconsistent slow bowling.

What a relief then to witness a perfect Dave Day cameo innings. Massively missed this season at no.7, he did what he so often has done over a magnificent twelve year club career. He bolstered the innings, dragging the score up from a dismal 12- 4. True, he played and missed a few times but quickly got his pus-filled eye in and set about the mediocre bowling. When he was stumped the score was 91. Q.B.(4) had just departed a few balls earlier and The Chief was charged with nursing the inning past 100 for the first time in five? weeks. Club Chairman Tel quietly let everyone know that he would personally The Chief with the bat he was stroking, if The Chief was out trying to slog to a straight one. Your reporter arrived at wicket, blocked out the over and then turned to watch as The Chief lofted his second ball to Long On. Needless to say, our chairman gave him a sound beating*. Every cloud has a silver lining – and Ricky emerged from the weekend’s carnage unbeaten, with his wickets intact and his tea towel unbesmirched. thrash

Embarrassment and despair meant the usual delicious Luppit spread failed to excite and it lodged somewhere half-way down the collective Grey gullet.

A score of 93 would not be enough but D.D and Ricky bowled well, developing pressure and creating chances. Dave’s figures 6-3-3-14 just shows what we are missing. A fine c&b was arguably* the highlight of his spell of pace and bounce. Ricky was very consistent and was put down at least once – all a repeat of the previous match. Greys’ catching, historically a great strength, has been atrocious.

So, with three wickets down for 38 no-one was getting excited, but batsman number four oozed composure and technique and quickly took the game out of sight. However even he was put down by keeper Jezzer after edging a Sewell out-swinger.

Q.B. Newlands bowled extremely well again, bagging two LBW’s in an over, his figures at that point 2-10 off three overs, but the Greys total was being neared.

It was the penultimate over when Sewell lost a chase to the fine leg boundary which so happens to be a hedge. His genuine attempt to drag the ball back with his foot left him spinning backwards into the mature hawthorn and bramble. Despite not really feeling the slightest bit playful, but to try and lighten the mood, he mimicked the intrusion of a woody bough into his rectum. Predictably, his team mates seized on this paltry crumb of Schadenfreude and even made it The Party Seven Moment of the match – a match in which Dave Day took his *300th wicket for the Greys!! Did I mention that? Pathetic! 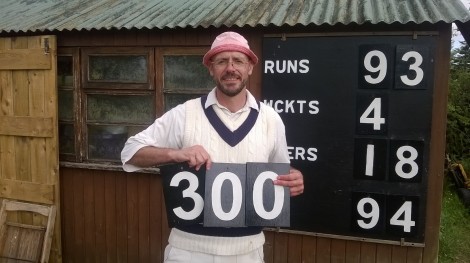 Platitudes were exchanged with Luppit big wigs about us not being shit and having players missing etc! blah!, blah!, but we were at least allowed to discover the delights of Luppit HQ, The Sidmouth Arms at Uppottery, an Otter stronghold.

It was here that it was first mooted that the Greys should transmogrify into a club for the playing of something other than cricket, the obvious choice being Wiff Waff. No serious objections to the proposal were noted. That was of course before the imminent invention of a different game – a radical new sport that will undoubtedly sweep the nation, a game of which, for the time being, The OnceAgain MightyGreys are the undisputed Champions of the World! ……..

An early practitioner of the sport – akin to playing cricket in a top hat.

Doubles is a new innovation in BDS. This pair lost their deposit.