Listen to the match report by clicking the play button below…turn your speakers on!

The full transcript is included below….

We needed wickets, desp’rately then,

Next over will be too late,

The ‘Lid are nearing our one-five-eight!

On first sight this score, was to be respected,

Each precious run was , pain-fully collected.

The Warninglid wicket, not fit for cricket,

One ball up here, the next down here! T’was hard!

Openers Jerry and Biff, found the bounce a bit stiff,

Still they hung around, their technique quite sound.

Then in came Old Terry, and made himself merry

Pulling it here, Cutting it, Where??! Off-side!

A sixty run partn’ship from Johnny and Davey

Before we knew, One-fifty was due, Good Times!

Long rumbles of timber, No chance for a limber!

Ibu and I spend a lifetime, wait-in for the right time,

One of the lads, oh, fuck no pads, Biff sighs.

‘Lid runs did not come lightly, The Greys bowling was spritely.

Wickets were coming, Greysmen were humming,

But with four wickets captured, we became less enraptured

Nastys ‘n Nesbitt were settled, the Greys getting nettled,

Losing six runs an over, the game nearly over.

An edge or a spoon, as high as the moon, to floor!

In what seemed desperation, Biff turned to rotation,

He made a breakthrough, so then Al did and Dave too.

Eight runs they need – our hearts did bleed, once more!

So back on comes Sewell, distracted old fool,

His confidence low down, not up for a show-down.

We live and we learn, the worm was to turn, this time!

The first ball was carted, time for t’brave-hearted.

The next ball was fuller, bat gave it some muller

The ball was skied, Shado-ow supplied, the catch!

Now Mongoose was on strike, an opponent we all like,

Fortunate to survive, the mis-hit of an off drive.

But he didn’t linger, next ball got the finger!

Not the contact he meant on, ball caught by Fenton, Nine down!

Only two runs required, but now Sewell was inspired

As he gained the crease, it was the perfect release.

All mouths were a-gaping, as the ball started shaping,

Oh Lord above, it took the glove, to slip!

Kiss me, dear Greysmen, be mine tonight!

Tomorrow will be too late,

Just one Cornetto, Give it to me!

Give me Cornetto from Walls Ice Cream! 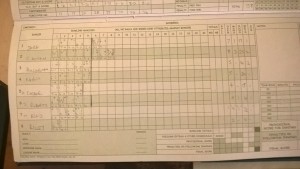