It was a much improved team that took to the field on that beautiful blistering hot day. The air was still and peaceful, punctuated by the lowing of cattle and the eerie cries of buzzards circling overhead. A black cockerel stalked ominously around outside the changing rooms, but Dykes was the only Greysman who eyeballed it. Excitedly he told Chairman Burgess of this diabolical observation – “what evil is this? what foul malevolence? could it be the same twisted shrew voodoo that dogged TMGs at Twineham?” “Bah! Nonsense!” bellowed Burgess, “You’ve been watching too much jibbajabba on the gogglebox.” Hrrummpf.

TMGs batted first, putting in a solid innings of 170 odd. Fine batting again from Line, and a surprise 9th wicket partnership of 50. Azami showed some genuine flair, Hoare clobbered a couple of sixes.

TMGs bowled well, but there were a few unlucky moments and couple missed chances. 3rd ball of the innings Dykes dropped a sharp catch at 2nd slip off the bowling of Gallagher (obviously troubled by the chicken voodoo), but later redeemed himself by taking a high altitude catch down at cow corner (PSM).
Back at the newly renovated clubhouse we were reminded of Chairman Burgess’ promise to take the entire team on an all expenses paid trip to the Caribbean if we completed the Ten Tasks. This naturally raises the question of the ongoing voodoo curse.. Whom, we wondered, had the most to gain from a sub-par TMGs performance?
Zack (typing live from a wedding a Copenhagen – athough actually published considerably later – sorry! Del) 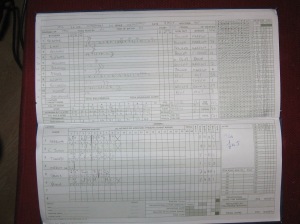