Everyone’s got their little stories. The notable happenings and accomplishments you gather over time. If you’re lucky you have friends, colleagues and partners who tolerate your endless re-visiting of how these minor dramas came about and ignore the fact that you exaggerate the details of these stories a little more with every telling. Sometimes though……just sometimes, you’ll do something so awe-inspiring that no matter how many times you re-tell the particulars of the event in question no exaggeration will ever be necessary.

On Sunday, right, we were playing at Southwater and I hit this 6 that was absolutely feckin’ massive, m8!! Flame emoji, flame emoji, flame emoji, just-painting-my-nails-no-big-deal emoji!!!! A sweetly struck pull over square leg which flew far beyond the longest boundary of the ground and into an allotment in a neighbouring county. The gathered crowds were united in reverence but divided in their opinions on just how far the ball had travelled. Conservative estimates suggested 80 metres but many onlookers guessed maybe half a kilometre or more; one eye-witness even claimed that the ball had been struck so hard it had become sentient and, as it sailed through the clouds, was apparently heard to be singing the 1962 pop smash by girl-rockers The Crystals…..”he hit me, and it felt like a kiss”. No exaggeration.

Aaaaaaaaanyway, a game of cricket happened either side of this epic, epic shot, geez! You should have seen it! 220 meters at least. No one could tell where it landed – it was too far for the naked eye to see. No exaggeration.

But yeah, the Greys went in to bat first on a tricky pitch that couldn’t tell if it was a bit lively or a bit sticky. Basically a pitch in the midst of a full blown identity crisis – never easy to negotiate in the early stages. Despite the conditions though, the Pugnacious Biff Line and the in-form Jerry Brasher both looked pretty comfortable before offering catches to fielders in the Southwater ring. Biff in particular played some nice shots before departing 4 short of 7000 Greys runs. Next week. HatRick also looked classy and commanding before he too fell having done the hard work and got a start. By the time he was joined by Zack, the top-order-marauder Del had already started to display all the shots in his locker, including one delicious sweep for 4 to bring up his half century. His new partner got in on the act by hitting a cross-bat boundary straight down the ground KP-style! Should have been PSM nommed really – sorry we forgot that at the time, Zack.

After The Man From D.U.N.C.L.E departed dibbing one to mid-on, the latter part of the innings was mainly centred around an 88-run partnership between the dynamic coaching duo of Ashton and Fenton. Alex hit an impressive maximum that sailed flat over extra cover and a lovely, subtle glance-sweep that went for four through fine leg. He also hit me square in the bollocks with what would have been a certain 4. I was attempting to do that thing I’ve seen actual cricketers do on the telly where they (as non-striker) let the ball that has been driven straight, run between their legs on its way to the boundary. Not being an actual cricketer though, I didn’t realise the ball was bouncing rather than rolling along the ground and, as I confidently thrust open my limbs, it cannoned up off the pitch and cracked me right in the conkers. At pace. It didn’t feel like a kiss.

Anyway, I think that covers most of the action….. oh actually, did I tell you about my 6? To bring up my 50! Apparently they’re making a film about it! 240 meters at least! No exaggeration.

The Greys had amassed 231 from their 40 overs, though it was noted over tea that our opposition didn’t seem in the slightest bit fazed by this (usually quite) commanding total. We were about to discover why…….Southwater are, like, proper good at cricket. They have this one guy in particular who batted like one of those actual cricketers you see on the telly. It would have been great to watch if we weren’t the ones bowling to him.

Alan took 3 wickets in a good opening spell and Robbie was the epitome of tight, stylish professionalism as he always is, though there is a case to be made that The Shadow was the pick of the bowlers. Good lines and good lengths meant he bowled a very economic spell in a high-scoring game and its something of a mystery as to why he didn’t get more than 4 overs??? Zack and Alex both bowled some good stuff too, with Zack especially looking more and more like the wizard swing bowler we all faced in winter nets as his spell progressed. This wasn’t a great day to be a bowler though really. The Greys took 7 wickets but I’m not sure too many of us will be instagramming photos of our figures from the scorebook. Their lad who was a bit good finished the run chase with a big straight 6 with a few overs to spare.

Often, losing can take the wind out of a day’s sails, but Southwater were such a great bunch of lads and such wonderful hosts (they bought us a jug of beer! For, like, no particular reason – how nice is that!) that by the time we left we were wondering if it might be possible to play them every week. Spectators! A massive sun terrace attached to the front of the club house! We hope they have us back. What a great club – and that, for once, is no exaggeration. 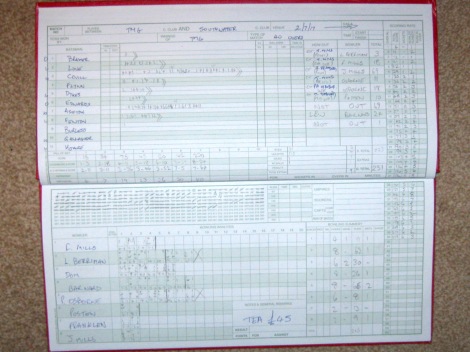 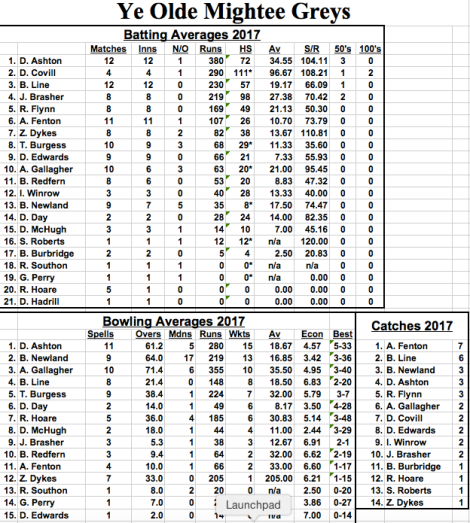 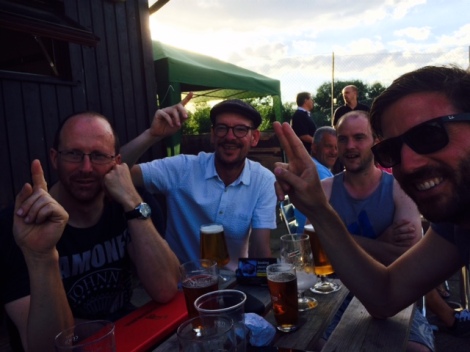 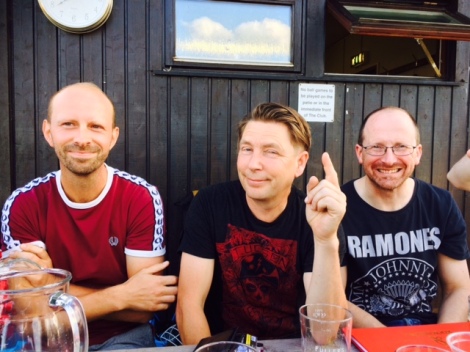 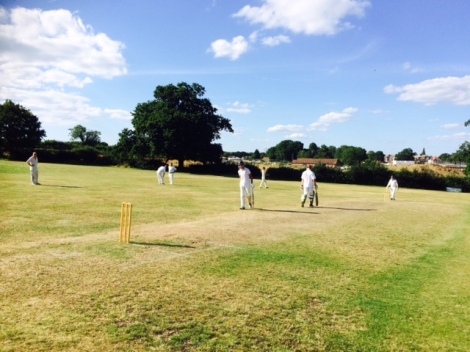 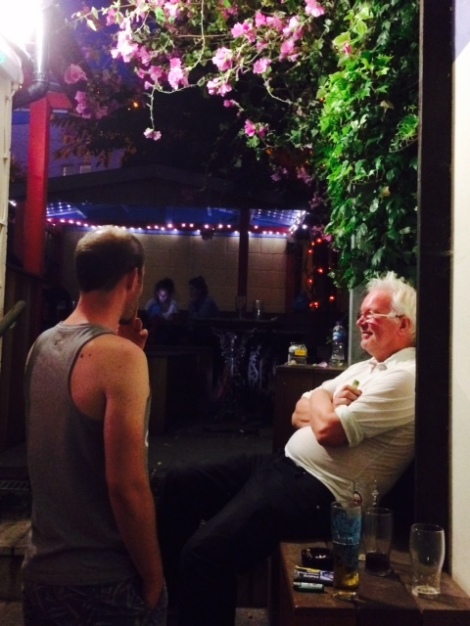 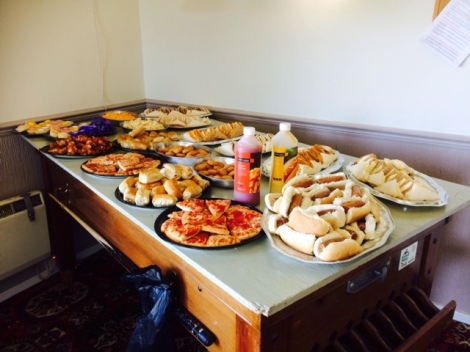 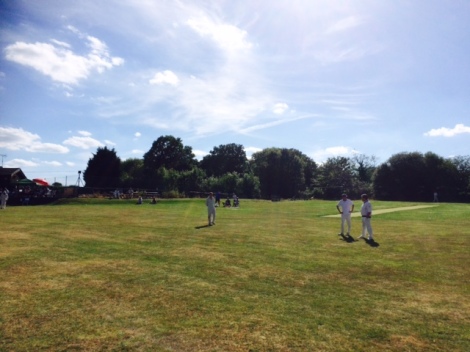 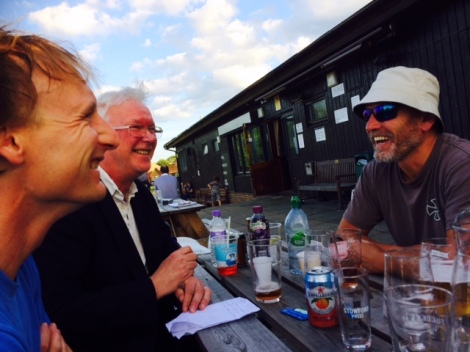 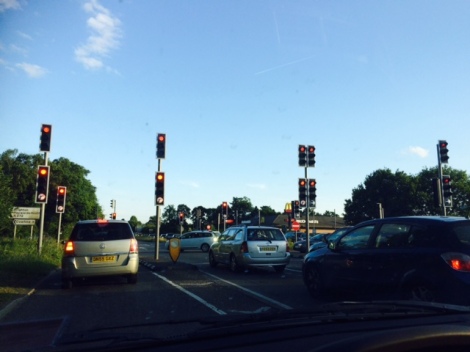