No one teaches you how to deal with this…Y’know…Anno Domini…Tempus Fugit.  That kind of stuff.  First your body goes, especially your eyes.  Like right now.  Watching the boys at Edgbaston and no matter what I do, that ball still looks pink to me.

And then your mind.  Your mind just goes. Here’s some symptoms to look out for.

Like last Sunday.  I saw this man’s face, my mind said it’s Dave Day but it can’t be him.  He doesn’t move among us anymore.  Eyes and ears seem the same but if it’s him he’s shaved off all that lovely curly ginger hair from his head, and stuck something weird under his nose.  And he’s drinking soda water. Definitely can’t be him!

I’m standing in this wet field near Sayers Common, and I want to tell everyone “I’ve already been here.  Or did I dream it? Or is this Warninglid already?  These places are like faces. They all look the same.  Where’s Mr Slaymaker?”  But I can’t be right. We only play teams once. I’d better keep quiet about this.

This is like walking into a room and then wondering why I’ve gone in there, but worse. Fuck me I’m in trouble. I’m turning into HAL 9000 and fast. I’ve got to tell that man who looks like Dave.  He works with people like me.  He’ll understand.

“My minds going, Dave. I can feel it”

“What was it like when the dinosaurs were here?”, he says, quick as a flash.

Maybe it is that Dave after all.  I’ll know for sure when he gets loads of quick runs today.

And these other people.  They’re weird too.  Keep pointing in my direction and shouting Shadow like I’m not there, just something that blocked by the Sun.

What the fuck is this one?

“Biff is in the middle, tossing up a coin

Robbie’s still in Devon, resting up his groin

The boys are in the changing room, waiting for the call

They definitely didn’t tell you that we all turn into Fred Trueman in the end.

I think I’m watching a game of cricket but the rules of bowling have changed.  There seem to only be two ways of doing it now.  Either you throw it straight at the batsman’s head (when Biff or Jerry will turn it off their ears for five no balls), or you just throw it down at your feet and watch it roll along the ground to the other end. But whatever you do, it ain’t gonna bounce.

No need to wonder why we keep on going under.

No-one really gets set on this pitch, lots of bowled and LBW.  Only Biff gets into the twenties, and we’re all out for 126.

Great big cake in the tea room with the numbers 6 and 0.  But my birthday isn’t till next February!   How could they possibly know – or is it my mind again?  Alex says it’s a 9 and 0 and it’s because the Wanderers are celebrating their 90th year (like we should be celebrating our 30th) but what does he know? He’s got mad eyes and a colander on his head!  Don’t mess with my head Alex.  You’ll be telling me that’s a bench made out of cricket bats next.

And Duncan’s going bad on my plate for tea

Says I’m eating too much, says it’s not healthy

Baguette on the left side, fruit cake on the right

Enough to keep me going till my pizza tonight!

Fuck it I give up.  Y’all look the same to me anyway, I told you.  Great catch, whoever it was, wherever it was. It’s just my mind Dave. It’s going.  But well bowled.

People throwing away their wicket like they just don’t care!

QB and Double Dee put it in the right place

Don’t push that cos you’re close to the edge!

We’re trying to protect that hedge!

Now it’s my turn to do that bowling thing.  Hat, jumper, dentures and walking stick to umpire.  Yes, I know the rules, chuck it at their head or at your toes and watch it roll.

When you’ve done chucking, fall away to your left.   But here comes the ball, straight back at me!  And it isn’t pink like on TV, which is weird. What’s he want to hit it back to me for? I’m not going over there!  It’ll rip every muscle in my body.  And I’ll land on my gammy knee.  Someone else can get that.

What is that in my hand? Why have all these Greysmen just landed on my head?

The bowling’s thrifty, the fielding’s nifty

No fucking chance they’ll get past fifty!

Don’t try and fuck with the Mighty Greys

Cos you’re going down in a fiery blaze!

So look out for the ravages of Anno Domini Greysmen.  That’s my message. 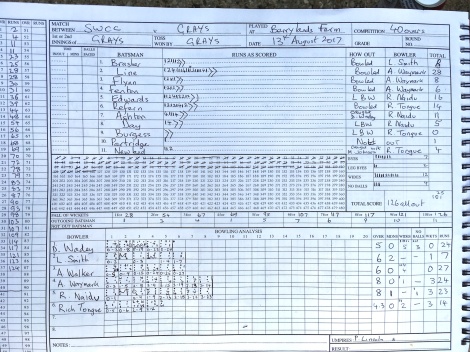